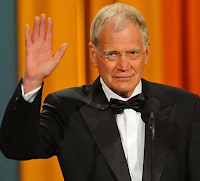 Letterman is a comedian's comedian.  His timing, with guests and with a punchline, is as flawless as it is unique.  He pauses for laughs at odd moments, slides in punchlines when you're not expecting them, and knows when to let a bit linger long past the expiration date in the script.  He and Saturday Night Live perfected this style in the '80s, crafting gags that overstayed their welcome so long they became funny again.

The same instincts that let him milk a bit always told him when it was time to let go — which is why there are so many classic Letterman routines you've surely forgotten a few of them.  Some bits, like "Beat the Clock" and "Is This Anything?," lay dormant for months or years before making a comeback when the time was right.

That giant doorknob from the Avengers issue?  That was a funny bit about prop comedy mostly lost to the ages.  (There are no clips to be found on YouTube.)

"Will It Float?" started simply enough (as the name of the game implies), but it escalated quickly, reinvigorated by the addition of embarrassingly naked showmanship whenever its popularity began to flag.  A giant curtain restored the mystery in its early days before scantily clad hula-hoop and grinder girls upped the ante on spectacle.

Not that Letterman's gags needed spectacle.  More often, they were defined by the lack of pomp and overproduction, as when he showed the audience his record collection or sent his mom abroad to award canned hams to Olympians.

He knew exactly how long to hold a joke, and he knew it long before the audience did.  This allowed him to run ahead of his own gags and lay the groundwork for laughter when audiences would grow tired of a bit or think they'd exhausted its comic potential.  Bit that seemed painfully ill-conceived played out over entire episodes, revealing themselves as hilarious slow burns given time and space to come into their own.


My personal favorite, nowhere to be found on YouTube, were the high-definition television special guests.  When HDTVs were becoming commonplace and cable and satellite providers offering content in the new format, Letterman had walk-on cameos from celebrities who stood off to the side of the picture — guests who would only be seen on HD's 16:9 ratio but remained tantalizingly off-screen for viewers watching the 4:3 standard-definition broadcast.  Harvey Pekar might have seen this as contempt for the working class who couldn't afford to buy new TVs just to keep up with the Joneses — but we all laughed.  It was a bit that could have worked only at that time, and Letterman kept it around just long enough to do its job.

It's fitting, then, that Letterman announced his retirement with a prolonged, rambly shaggy-dog story that turned out to be concise and relevant, though the audience never realized it until he hit the punchline.

That's Letterman:  Perfect timing and thinking faster than his audience all the the way up to the finish line.