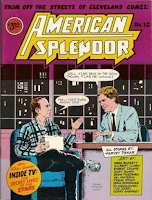 Talk-show hosts (even late-night talk-show hosts) used to interview celebrities.  Letterman, already blurring the line between cast and staff on Late Night, decided he might as well interview interesting people who weren't celebrities.

And so the world met Harvey Pekar, an autobiographical cartoonist from Cleveland (by night; Harvey was a file clerk at the Veterans Affairs Administration by day).  Pekar and Letterman clashed several times over the years.  Just as Letterman jabbed at television convention with his brash, irreverent show, Pekar jabbed at Late Night.  Theirs was a thorny relationship, with Harvey Pekar more real than the realest guy on television.  Letterman eventually stopped inviting Pekar to the show, but not before he had him on the more staid, mainstream Late Show once, in 1994.  Once was all it took for Pekar to address the in-studio audience, telling them, "Letterman has more contempt for you than I do.  Don't kid yourself." 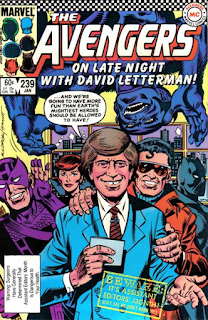 Oh, and Letterman teamed up with the Avengers during Assistant Editors Month.

Sure, Obama has met Spider-Man, but that's in an age when the Avengers themselves are blockbuster movie stars.  In 1983, when Letterman's 12:30 show had barely been on a year, comics were anything but hip and Letterman was all but unknown.  But he was popular among New Yorkers and college students, which meant there was counterculture synergy to be had in blending Late Night with Marvel characters.  (Then-)assistant editor Mike Carlin recognized the value in a crossover and contacted NBC to "book" the Avengers for an appearance in their own title.  The issue was equal parts super-hero throwdown and sketch-comedy romp, writer Roger Stern scripting such convincing versions of David Letterman and Paul Shaffer I sometimes attribute one-liners from this issue to the actual show.

The Avengers weren't even the show's oddest guests.  Late Night also had Andy Kaufman on at his strangest and most controversial, during his infamous feud with professional wrestler Jerry "The King" Lawler.  Feuds being a standard trope of both pro wrestling and celebrity, Kaufman staged a perfect one — sometimes a delightful circus, sometimes erupting unexpectedly into (seemingly) real violence and confusion.  Audiences of the day struggled to tell how much was performance.  When Kaufman frothed over in a tirade of obscenities on Late Night, no one thought it could have been a bit.  Letterman seemed visibly upset.  Lawler seemed furious.  Kaufman seemed unsympathetic and perhaps unhinged.  If the whole thing were staged, no one would have let it go that far off the rails — would they?

Jim offered up a fun analogy when were talking about Kaufman and Letterman's rising stars in the early 1980s.  They both worked in absurdity and surrealism, tearing down institutional comedy from within like true subversives.  In this, they're much like the Fawcett Comics characters.  Letterman, in retaining his Midwestern naïveté and acting as the protagonist, is Captain Marvel.  Kaufman, with his put-on sniveling and sincere cynicism, plays the role of Black Adam.  Two opposing forces wielding the powers of celebrity and intelligence.

Patton Oswalt summed it up well when he called Letterman's world a "twilight circus of irony, sweetness, freaks and geniuses" on Facebook and explained Letterman himself as a freak who could pass among straights on Conan just before the Late Show finale.