(Top) 10 Things About David Letterman — Number Five: Biting the Hand That Feeds Him! 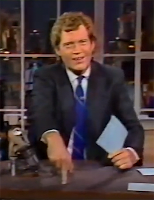 If you wanted contempt, Late Night had plenty of that on offer, too.

You got hints of it in Letterman's public feuds with Bryant Gumbel and Jay Leno and sometimes in his prickly, combative dealings with guests like Cher or Oprah Winfrey   It was usually for a laugh — at least on Letterman's part.  (He is a comedian, after all, with the driving comedic instinct to get a laugh whenever possible.)

Most often, though, you got it in the most unexpected, uncomfortable, and yet natural place in the world, someplace we can all relate to: Letterman's relationship with his bosses.

Though he had dust-ups with CBS over the years, Letterman was largely valued at that network and treated with some dignity.  (Except in Sioux City, Iowa, where the local affiliate refused to carry The Late Show back in 1993.)  At NBC, however, he'd started as a disposable cog in the network machinery.  Over time, his influence with viewers and sponsors grew to the point where he became more important to the network than any of his bosses — or even their bosses, as proved the case when General Electric bought NBC and became the target of Letterman's mockery.

Working for GE inspired some of Kurt Vonnegut's best work, and it did the same for David Letterman.


Nor were advertisers safe from Letterman's sharp sense of humor.  He rarely went after them directly, both versions of the show routinely featured jokes about the need to sell advertising and spoof products deflating the snake-oil hucksterism of TV commercials in general.

Letterman closed "Will It Float?" bits with a pitch for the home game.  He awarded studio audience participants with boxes of Explod-O-Pop microwave popcorn, a gag rooted in people's distrust of the microwave.  (It was always described with toxic adjectives. e.g. "contaminated with flavor!")  When CBS lightened up on the use of the word ass, he introduced Big Ass Ham, roping good-natured celebrities will to play on their — ah, let's say "abrasive" — reputations into recording spoof commercials for the brand.