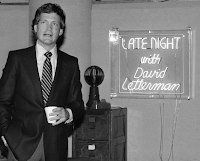 Letting everyone in on the joke, from the office staff to the home viewer, was the just the beginning of Letterman's shtick.  Late Night was thoroughly anti-establishment and deeply ironic.  It never missed an opportunity to lampoon the superficial spectacle of television itself.

One time, that involved retooling the show for people who taped it and watched in the morning.  Another time, it involved an empty studio as Letterman waited at home for the cable TV installer.

Late Night never forgot its place in the television continuum.  On the rare occasions he resorted to them, Letterman took otherwise straightforward spoofs and turned them into meditations on the form.

Many feared the "underground" or "countercultural" tone would evaporate when Letterman left 12:30 for 11:30 to compete with the mainstream powerhouse The Tonight Show, but it didn't:  It just became a little slyer.

Letterman's first episode on CBS featured staid, mainstream Paul Newman standing up and walking out because the show didn't feature "singing cats" (a nod to "Stupid Pet Tricks," a bit NBC wouldn't let him Letterman take to CBS) — and irreverent youth-culture icon Bill Murray defacing Letterman's new desk.  If that didn't put you on notice the show would continue to be subversive, even in the hallowed halls of 11:30, well, maybe you were aging into that "mainstream" part of the demographic that doesn't appreciate irony and subtext.

Like most revisionists, Letterman's desire to tear apart and rebuild television was born not of contempt but of reverence.  That reverence was on full display when he collaborated with Tonight Show host Johnny Carson, spoofing programming trends of the day with a manufactured feud whose solution was pure television.

Letterman loved TV.  If you doubt me, just look at the way he relentlessly needles it.  Letterman mocks the medium as only a friend can — with intimate understanding of it and ultimate forgiveness for its flaws.