Tips for Artists from a Guy Who Can't Draw

For the past couple of weeks, I've been reading and reviewing art samples from various artists who are applying to illustrate a book cover I am working on. (Not a comics project) This is an arduous process that usually leaves me feeling like this: 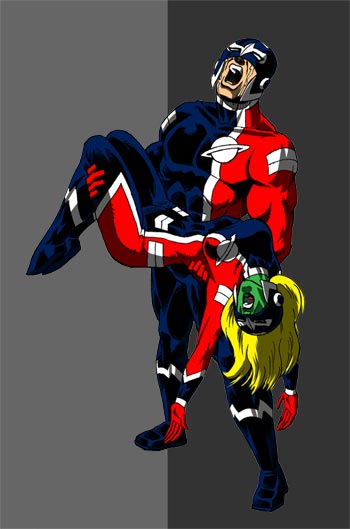 I have seen a LOT of good art portfolios by some incredible artists, but as usual, there are many new artists that make the reviewing process difficult. So today, I'd like to post a few tips to any artists that will help them get more art jobs.

Get a website for your portfolio
If you can't build your own, there are quite a number of free services (Flickr, DeviantArt, ComicArtFans) that you can use. It was at ComicArtFans that I saw Pierre Villeneuve art for the first time.

The best thing about such sites is that they give you a way to display your art with nice thumbnail previews. Like Pierre is doing here: 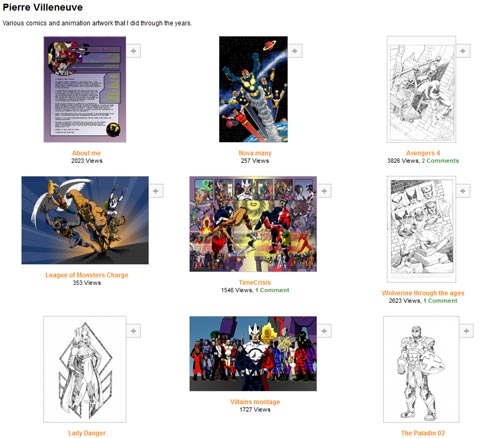 What is good about this is it allows a prospective editor or customer to see a lot of samples all at the same time. Then we can zero in on the one we like the best very quickly. (I really like this page by Pierre btw) 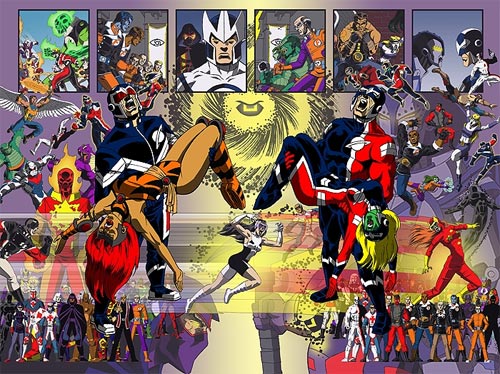 The other thing that is cool about ComicArtFans is that it gives you a nice way to group your art into categories. (I don't know if DeviantArt can do this or not)

Keep Attachments Small
Art samples in an email should never be bigger than 5 megs. I received one sample that was 24 megs. 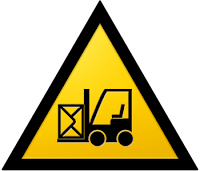 I didn't even know Gmail could handle files that big. As it is, an editor may be reviewing your portfolio over a slow connection like a 3G network on their iPad or phone. They will not be able to easily view huge files. Make it easier on them and keep the file size under 500K if at all possible.

Don't send your art in a PDF
Not everyone even has Adobe PDF reader on their computer, so you don't want to lose a possible sale that way. Plus, there are some people who just hate the PDF format out of hand (as this graphic that I found floating around the internet will testify.) 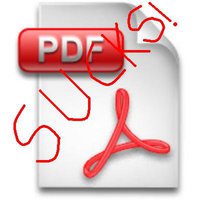 Include references if you have them
If you've worked on other projects in the past, mention them. It shows a certain level of professionalism that gives people confidence in working with you.

Double check your email
This sounds like a no brainer, but I received several emails with no links to a portfolio site and no attached art samples. Just a sentence saying, "Hey. I saw your ad. I am interested." I don't know if these people forgot to send me a link or samples OR if they intended for me to ask them to send me more information. The sad truth is, I've only got a limited amount of time to review art, so their emails lose out to the people who sent me what I needed the first time.

Posted by Jim Shelley at 7:44 PM No comments:

Today FBU Co-Creator and Animator Extraordinaire Pierre makes a rare appearance in order to give us a his review of the Avengers cartoon on Disney XD. - Jim
And there came a day when Earth's mightiest heroes found themselves united against a common threat. On that day, the Avengers were born.... to fight the foes no single super-hero could withstand.

That small paragraph sums up perfectly who the Avengers are. When I first saw some clips for "Earth's Mightiest Heroes... The Avengers".... all I could think of was of how poor the animation was.

There are many reasons behind that. The style used was not very streamlined for animation... and the character designs are wayyyy too busy to be animated easily. It must have been an Herculean task to do the animation for that show. Sadly... the producers shot themselves in the foot from day one with some poor decisions that made the animator's job next to impossible.

So I had no interest to watch the show. But I caught the first episode one night and decided to watch it. And despite all the flaws, despite all the poor decisions, I liked it. The broadcasters did a very smart move, the first episode they aired was supposed to be the sixth episode in the series. The first episode from what I understand was meant to feature only Iron-man. Then the second one was meant for Thor. Then Hulk. Then Cap. And finally after 5 episodes more or less of solo adventures, we would get the Avengers. So we would have had to wait 6 episodes before getting to see Earth's mightiest heroes.

But that meant risking disappointing those who wanted to see the Avengers. Not the solo adventures of Iron-man, or the solo adventures of Thor. If you want to do that, make a solo Iron-man series, or a solo Thor series.
But then again, I can pretty much tell you what the producers were thinking. At the time they made the Avengers cartoon, the Iron-man movie had been a hit (not sure if we had Iron-man 2 yet at that point). So the Iron-man movie being a hit, they figured that starting the Avengers cartoon with a solo episode starring Iron-man would have meant instant success. Yes producers can be funny that way sometimes.

But luckily the Broadcasters had a much better idea. The broadcasters did a very smart thing and started with a bang. They started with an episode starring all the Avengers, or at least most of them and then after that they gave us the episodes that focused on the individual members.

How do I know in what order the episodes were meant to be played as?? The director of Walter & Tandoori gave me the first season of Earth's Mightiest Heroes, The Avengers on Blu-Ray. So that is how I know the original intent of the producers.

Of course, I could be mistaken and it could all be in my head only. But I have been working in animation for quite some time now, and I pretty much know how producers and broadcasters think by now. So I like to believe that I can make a lot more than just a guess, but a HECK of an educated guess by now. But you never know for certain, I could be mistaken.
Oh well.

So if the animation is so bad, why did I like this show?? Because it did feature a more classic version of the Avengers then the movie did.  In the cartoon version, Hawkeye is the Hawkeye that I love. Iron-man seems more like the movie version, but Thor feels like Thor. Cap looks and act like Cap. And heck we get a lot of classic Avengers villains.

Any show that gives us the Kirby version of Arnim Zola is okay in my book. ;)

So most of the characters look and act like the comic version used to. Some elements from the movies did creep into the show like the Iron-man/Tony Stark from the movies, or the black Nick Fury. But it is mostly minor stuff. So the fun characters and engaging stories quickly made me forget the poor animation. I would not suggest this show to everyone. I would suggest this show to any classic Avengers fan.

Although I did try to suggest the show to some guys at the studio who love silver age comics, but they could not get over the poor animation. Guess they were not as forgiving as me. ;)

Sadly it seems that the second season of the series will be its last. Disney plans to replace it with a new Avengers show from what I hear. No surprise there, that was to be expected. I guess we will have to wait and see if the new show will be an improvement or not.

I had a new post by Pierre ready to go today when I found out that Joe Kubert passed away over the weekend.

While he never worked much on the superhero comics I loved so much as a kid, his Tarzan made quite an impression on me. (click to see full size) 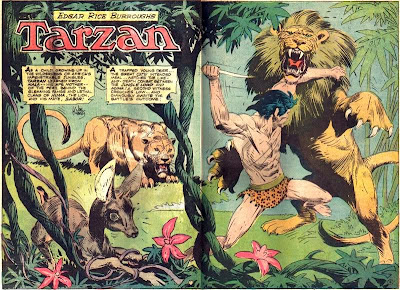 Where I first encountered his work was with the 100 Page Super Spectaculars (which I tried in vain to collect, but my newsstand wasn't as interested in them as I was.) I did manage to get my hands on this one at the newsstand. 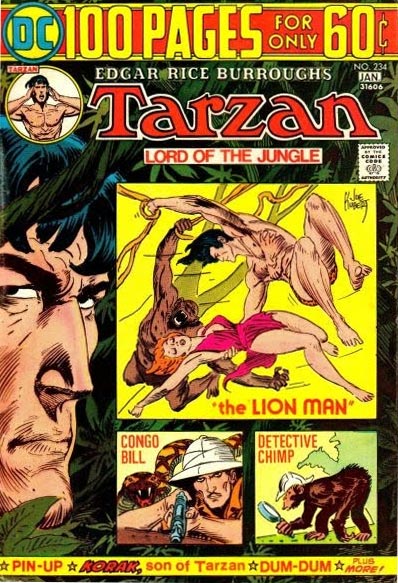 And this one later at a Heroescon (back when Heroescon was held inside of Eastland Mall for those of you who can remember such a time.) 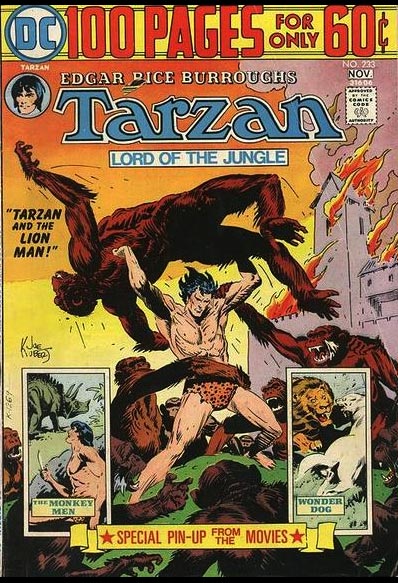 As a kid, Kubert's style struck me as extremely realistic - not in a photo realism way, but in ability to capture motion. Even simple pages with very little action looked realer. 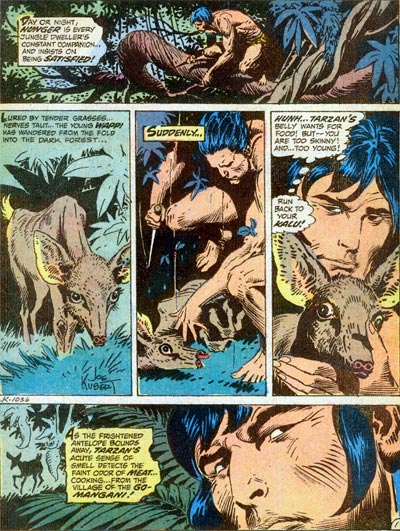 When I was in college, and heard about the Joe Kubert school for comic artists, it made total sense to me. Who else would be better suited for such a role?

He was definitely the master of the form.

How is your comic shop doing?

I am at the beach this weekend, So today's post is going to be a little light. - Jim

Reading this news item at the ComicsBeat.com, It made me think about Comic book sales at my own comic shop.

A Growing Sense of Concern Over Marvel’s Sales - http://pulse.me/s/bTQgh

For the past couple of months I've noticed my comic shop orders less titles and often running out of comics before the end of Wednesday. In many cases I have also noticed the shop misjudged how many to issues to order (the recent wedding issue of x men was significantly over ordered.) There was also a recent round of layoffs at the shop with many long time employees being shown the door. All that adds up to a business in serious trouble.

This makes me wonder:
Are the problems at my shop indicative of widespread problems throughout the industry?

So how is the place you buy your comics doing?