I've just returned from HeroesCon 2015 where I met a lot of great creators and vendors, one of which I'm eager to share with you: ComicBlitz! As leaked last week on Bleeding Cool, ComicBlitz is a new digital comics platform that promises to bring a Netflix approach to reading digital comics. For $9.99, you will be able to read an unlimited number of comics on their application.

I was able to get a video interview with Jordan Plosky, the founder of ComicBlitz where I ask him for details about how the service will work. Check out the short (4 mins) video below:


Some of the key details he shared with me were:

Note: I'm dressed in cosplay as Davial as my daughter Haigen was dressed as Malificient (see below) 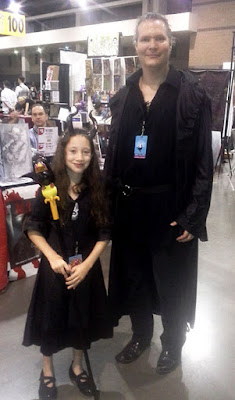 As I mentioned, we met a lot of great creators. One Haigen was especially anxious to meet was Babs Tarr, the artist of the new Batgirl comic! 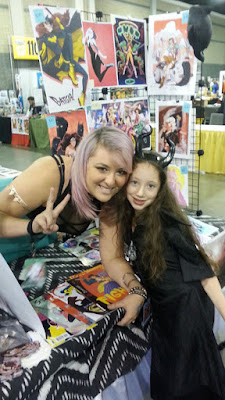 While the comic may have its detractors among long time collectors, I can definitely say without hesitation that DC has been successful in retooling Batgirl for a younger generation. Haigen bought the graphic novel last weekend after pouring  over a stack of comics at Punk Monkey Comics and she was instantly drawn to the new Batgirl trade paperback. When we got to Heroescon a week later, I was surprised to discover that Haigen had taken it upon herself to bring the grahic novel along in hopes of getting it signed.

Babs was super nice at the convention. She answered Haigen's questions, signed her trade paperback and suggested the posed picture you see above. This was definitely one of the highlights of the con for Haigen.

I had a great time too and met a few vendors who publish comics which I think will definitely appeal to readers of this site, but that post will have to comic later this week as I'm under a time crunch today. (Look for it around Wednesday or Thursday)

Sounds like a good time. If it hadn't coincided we father's day I would have like to have gone, myself.

Interesting to hear that ComicBlitz! originals are part of their road map.

Without the glasses, you bear a bit of a resemblance to David Hasselhoff. :)

@Reno - I can totally see that. And as it would so happened, I have been known to talk to my car. (Though it never talks back...) :D