Revisiting The Wild Wild West: The Night of the Cossacks 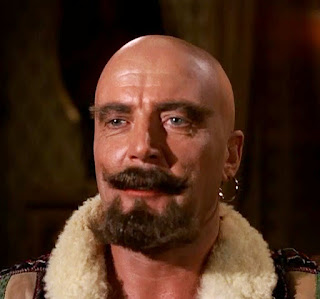 "The Night of the Cossacks"
Written by  Oliver Crawford
Directed by Mike Moder
Synopsis: West and Gordon must protect the royal family of Karovnia who have traveled to the U.S., fleeing an assassination attempt in their homeland. They are pursued by Count Balkovitch who seeks an icon he needs to possess in order to usurp the throne.
Trey: It seems to me episodes with Russian/Eastern European visitors often have decent action, but are otherwise lackluster. I feel like this one fits that pattern.
Jim: Lackluster? I think that's a harsher criticism than this episode deserves! I actually found the character drama, political intrigue and use of Eastern Slavic culture in this episode a welcome change of pace. It gave the story a bit more depth than the average would-be tyrant storyline.
Trey: Slavic culture or Slavic caricature?
Jim: Well... Anyway, I did find amusing  how West has to really play diplomat here. He's got to tactfully correct his visitors who lack cultural fluency with American customs and are perhaps a bit rustic without insulting them. It strikes me as one of those quaint examples of the paternalistic notion of America during this era as the more experienced, older brother on the world stage that was so dominant in television at this time. Trey: It's a quaint notion at the best of times, but it's downright anachronistic here! It's the 60s seeping through.
There are a couple of guest stars of note, here. Aliza Gur plays Maria. She was Miss Israel 1960, and perhaps best known for her role in From Russia With Love. The Prince is played by Guy Stockwell, younger brother to Dean.
Jim: When you say that, I can see the resemblance, but I would have never got there on my own.
Trey: That's what I'm here for! Well, one of the things.
Posted by Trey at 3:28 PM No comments:

Revisiting The Wild Wild West: The Night of the Bleak Island 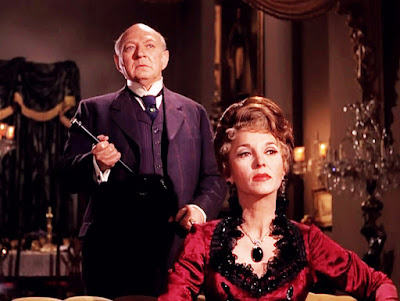 "The Night of the Bleak Island"
Written by  Robert E Kent
Directed by Marvin J Chomsky
Synopsis: West goes to the aptly named Bleak Island to retrieve a diamond bequeathed to the National Museum. When howls of a ghostly hound are heard and a murder occurs, He teams up with another invitee and an old acquaintance, Sir Nigel Scott of Scotland Yard, to solve the mystery.
Jim: Given the opening shots of the tiny ship tossed amongst the waves, this really would have been the better episode to have Alan Hale Jr. guest star on. They even use the same ship from Gilligan's Island in one shot.
Trey: The little boat they were in I'm pretty sure was the same one in "The Night of the Pelican," too.
Jim: All the guests talking on the small boat as they ferry to Bleak Island gives us an appropriate And Then There Were None vibe, though the actual episode leans more on The Hound of the Baskervilles. With a slight nod to Wilke Collins' The Moonstone! This episode manages to find a way to tip its hat to at least three classic English mystery stories.
Trey: The title may even be a reference to Dickens' Bleak House, too, but that could be just a coincidence.
Jim: I'm curious when this episode was filmed. Was it during Martin's absence? If so, they sat on it for a bit before showing it.
Trey: Looking at production order, this the last episode filmed before Ross' return in "The Night of the Diva." I don't know why they saved it.
Jim: Interestingly, it has some Gothic trapping and tropes in common with that episode. 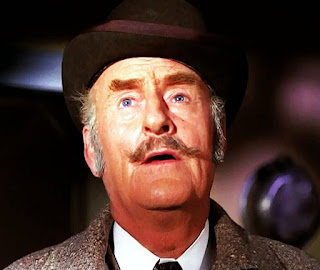 Trey: Agreed!
Jim: John Williams, as Sir Nigel Scott, makes  a good Sherlock Holmes analog. Though, I think I would have enjoyed seeing a much younger man portraying the real Sherlock Holmes. However, given the way the plot plays out, though, it makes sense why they didn't go that way.
Trey: Yeah, if we go by fandom theorizing, Holmes would have been in his 20s probably here. He's like 10 years younger that West. As you say though, Sir Nigel presents the aging British Empire and West up and the up and coming United States. I don't think the SPOILER--reveal of Sir Nigel as the villain plays a part in the allegory, though.
Jim: I'm gonna have to think about that.
Posted by Trey at 1:14 PM No comments:

Revisiting The Wild Wild West: The Night of the Diva 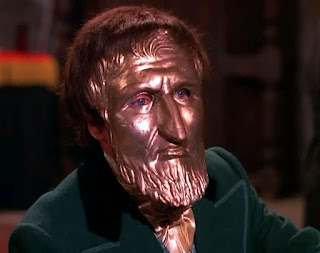 "The Night of the Diva"
Written by  Alf Harris (story) and Ken Pettus
Directed by Herb Wallerstein
Synopsis: In New Orleans, West and Gordon struggle to protect an opera diva from Italy from a plot to kidnap her. They discover she's not the only opera singer to meet with foul play recently.
Jim: New Orleans is a welcome change of venue! Also good to get the real return of Artemus. During the opening scene, Gordon is really on emotive fire, and Conrad seems to be genuinely enjoying his performance.
Trey: New Orleans is one of WWW's "go to" locales, but you're right, it has been a little while.
Jim: I loved the humorous tone of this episode. It may be a bit more tongue in cheek than some fans would like, but it hits the sweet spot for me. I also liked the natural convergence of both West's and Gordon's plots. The villain's identity reveal was a shocker too. Overall, this was excellent episode.
Trey: While I agree there are humorous parts to this episode, there are certainly aspects that are far from humorous. It's another with Gothic touches, and the reveal of its primary villain is positively Hitchcockian! Without Artie's travails with the Opera Singer, I'd call this one of the more horrific/thriller-like of Wild Wild West episodes. 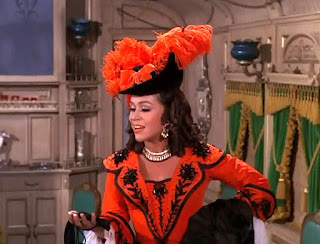 Jim: Good point. It goes from a mildly humorous beginning to women in cages in a dungeon!  Did the cinematography seem different this episode? They must've used a hand held camera for the alley fight, because the frame was jumping all around, almost cinéma vérité.
Trey: I thought the same thing regarding the alley fight. I think it did use a shaky camera, much like part of the opening of last episode. This more cinematic camera work and shots at times definitely positions us more like the 70s TV to come than the mid-60s TV where we started. Another indication of changing times: the addition of Mason and other women secret service personnel in a few other episodes this season makes it seem to me they were considering adding a regular female cast member, but they never fully committed for one reason or another.
Jim: A female agent would have been a smart addition to the series. I'm a bit surprised they didn't use Gordon's medical leave as an opportunity to team West up with a female agent. I would've cast either Sandy Duncan, Teri Garr or Marlo Thomas in that role.
Trey: All good choices! But man, Diana Rigg as a visiting British agent would have been awesome.
Jim: Right?!
Posted by Trey at 8:34 PM No comments:

Revisiting The Wild Wild West: The NIght of the Pistoleros 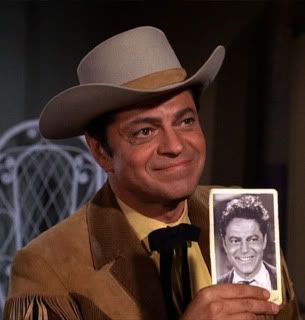 "The Night of the Pistoleros"
Written by  Earl Barret and Robert C. Dennis
Directed by Bernard McEveety
Synopsis: Called to an isolated border fort by an old friend, West and Gordon stumble upon an elaborate scheme involving imposter army officers to provoke a war with Mexico.
Jim: It's great to see Ross Martin return to the show, even if this was actually shot before he returned.
Trey: It is, but yeah, since this episode doesn't mention Artemus being away in Washington and the next does, it seems like this was shown out of production order. I also note  I think this is the first we've heard of Artie's Civil War service.
Jim: I found the focus on Artemis Gordon in this episode very interesting. It added a bit of mystery to the corrupt cavalry plot. When he was shot, I kept expecting to see him return in the next scene. This is probably one of the better fake outs we've gotten in the series.
Trey: The episode may be only the second we've seen that we've watched that truly integrated a Bond/Mission Impossible style plot with a Western one. That makes it better than a lot of the straight up Western riffs. It's also seems to be a notably violent episode. It opens with a shoot out, which is a rarity for this show.
Jim: Yeah, I totally get a Mission Impossible vibe from this episode as well. Part of it is all extensive use of doppelgangers. The perfect duplication of a person's features via plastic surgery feels like a very 60's thing. The ambush and standoff made for a good cold open, and the pink smoke providing cover for their escape was a nice way to add some color to the scene. 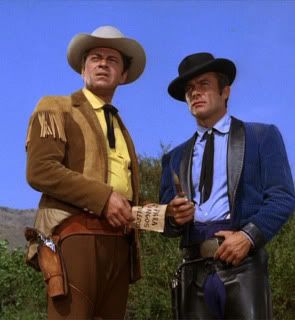 Trey: 60s TV does love it's pinkish smoke! I'm disappointed that we don't get to know more about the villain, particularly because I believe he's unique in the series: a Mexican (I assume) mastermind. Most villains in the episodes set in Mexico are gringo interlopers. Mexican characters are at best supporting cast and at worst window-dressing. This guy is local, and has a plot that seems centered locally. The U.S. army is just the instrument he's employing. The surgeon seems extraneous to me, though. Why not have the mastermind also be the surgeon?
Jim: Yeah, the main villain and the surgeon could have been easily combined, but I would have wanted a better actor for that role -  maybe a reappearance by Ricardo Montalban?
Trey: Well, we didn't get Ricardo Montalban, but you know who we did get? A young Robert Pine of CHiPs fame.
Jim: I think Erik Estrada is really the only actor that deserves to be in the same sentence with "CHiPs" and "fame."
Trey: Good point.
Posted by Trey at 7:00 AM No comments: