The first is Heroes-Inc, written and illustrated by Scott Austin. His story gives us an interesting modern updating of the characters that seems to retain the spirit of the characters very well. Check out this nice bit of teaser text:

In a world where the Allies of WWII lost the war and superheroes are believed to be nothing more than pulp fiction, the world is shocked by alarming reports of super villains emerging around the globe to terrorize and wreak havoc.

Archibald Masters, The American Crusader, now an old man, sets out on a mission to find the remaining Golden Age heroes and take DNA samples from them in order to create a new generation of heroes to serve and protect the country that is so dear to his heart. 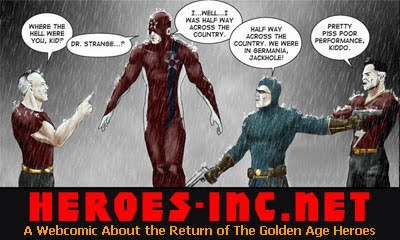 The other one to check out is Out of Print, produced by Michael Parkinson. OOP is a parody web comic that uses a lot of familiar Public Domain Heroes in some pretty funny situations.

Out of Print uses characters from the golden age of comic books that are now in the public domain. In fact the strip itself is set around a support group for superheroes that find themselves in that very situation.

Of interest to me, and probably to no one else, is how both of these web comics have a bit on their site explaining why it's okay for the creators to use the characters they are using. I wonder if they (like me) get emails from people valiantly defending the non-existent character copyrights for huge multi-national corporations?

Here is a perfect example:

Dear Flashback Universe you should remove your comics if you don't want to be sued by IDW they are the only ones who are to be printing Black Terror and you will be sued by them if you do not take your comics downs. - Andros.

Why do people feel the need to try and convince me that I'm going to burn in Copyright-Hell because I've posted a public domain issue of the GA Daredevil? Are they Alex Ross fans gone bad or something? Do they think I'm somehow depriving Alex Ross or IDW or whoever of some necessary source of income? I have to ask because they rarely want to reply when I explain how Public Domain works.

Anyway, enough of that... have a great day!

Come on you know it's of interest to me too Jim. ;)
Oh good lord!!! People actually send you warning e-mails in defense of creators who are using public domain heroes! Never mind what business is it of anyone else who's suing who... If any legal action is needed it's a restraining order against Alex Ross and the havoc he's wrecked with Project: F.U.B.A.R.
Next Issue Project on the other hand is mostly awesome but even then Erik Larsen comments (about Image's Fantastic Comics vs. anyone else's possible Fantastic Comics) come close to copyright creep. AC comics was there with bringing back the 'forgotten' golden age characters before anyone else was, but I suppose not many wanted to defend there honor. Marvel ripped off the Black Terror's costume for the Punisher, no way they would have done that if there was any chance of being sued for it. Not to mention Marvel's swiping all those great Golden Age character names like Captain Marvel, Daredevil, and so on...
I'm not -and don't expect- everyone/anyone to be self taught comic historians and copyright lawyers -but bloody fucking hell!!! It amazes me people (who have probably never read a Lev Gleason or Nedor/Standard comic in there life) would actually spend time on warning emails/comments. The big boys in comics can take care of themselves without any help from fanboy fifth columnists.

I never got many serious "stalkers" I did get some polite warnings though.
One of the things about some of these characters is that even though DC and Marvel have kind of made them their own, they're STILL in public domain. (Original version of Blue Beetle etc.)

Of course if push came to shove there's no doubt who would win... :-D

As for other users of the public domain heroes... Alex Ross does some kickass covers, no doubt about it, but the stories haven't done it for me. At all! I've kept up with then from time to time out of curiousity. It seems that in the newest storyline they have some WWII flashbacks of Black Terror and American Crusader being buddy buddy. Then in present day they're fighting each other!! Hmmm... sounds familiar. :?

Not familiar with the Image stuff. AC... had some good spots.

But anyways...
Thanks for the plug.

Well then I'm going to be burning right along with you buddy! I know that you explained to these guys that the golden age public domain stories/heroes are just that, PUBLIC domain. I am working on the storyline now that has public domain heroes such as the Grim Reaper, Scarlet Arrow, Nightmare and (believe it or not) Micro Face!

The website should be ready in a few months, so I guess I should be prepared for my share of "yer gonna get it from the bigguns" letters! :p

Thanks for turning me on to these two sites. Project F.U.B.A.R. ::ROTFLMAO::

Wow - if I want to illicit responses on my blog, I should remember to post more crazy emails! :D

I'll take these one at a time (cuz the blogger interface just sucks for long responses...)

@RKB - Project F.U.B.A.R is brilliant! - And exactly how many of Erik Larsen's Next Issue Project comics ever came out? I was only aware of the one...)

I agree with - it's strange that some fans want to storm a creators castle with torches and pitchforks because...why? Because they think a giant company needs their help defending their copyrights? I think partly it's a neurosis caused by people who have a hard time with multiple continuities - like they worry at night about which Black Terror is the REAL Black Terror, y'know?

@heroes-inc Hey THANK YOU for the awesome comic! I've been getting a real kick out of seeing the versions of your characters. Your Black Terror is especially cool looking!

@GACN - You are quite welcome! I actually found these links while digging through the GAUK forums looking for information about the GM Watermarked comics (I was never sure if that got resolved.)

Are you familiar with the history of the Graffix Media dispute?

"about the GM Watermarked comics (I was never sure if that got resolved.)"

To the best of my knowledge, the scans containing the "GM" watermarks were removed from GAUK (or "GAC" as the members there refer to it as). Technically, the issue was one of "Trademark" in regards to the "GM" mark, but people kept throwing around the word "Copyright" instead.

depending on if it's still on the schedule Image had solicited Next Issue Project: Sliver Streak Comics #24 for early Dec. So I'm waiting...
:)

Thanks to both bchat and RKB for the updated information! (I wonder how the first Next Issue Project did in sales? And how much of that could you attribute to it being from Image and Larsen promoting it?)

"...Why do people feel the need to try and convince me that I'm going to burn in Copyright-Hell because I've posted a public domain issue of the GA Daredevil? ..."

Because they're ignorant maladjusted people who have nothing better to do than force misinformed opinions at people who are not only very well informed about the law- but are really doing what they do out of creative drive and love for the characters. That's it in a unexpurgated nutshell, man. They're idiots and mudslingers. I love your blog and comics. Keep it up. I'm going to start my own PDSH webcomic just for spite.

@Flameape - LOL! Thank you for that rousing show of support! Please let me know when you start your webcomic - I would love to see it!

so how do i get to the OUT OF PRINT webcomic. I go to oopcomics.com and it is a search page. is this some joke page that leads to the webcomic