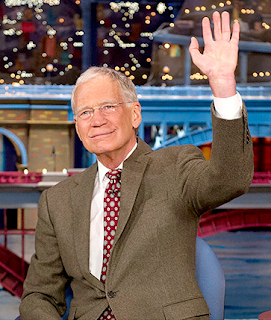 Thanks for sticking with me through this day-long reflection on David Letterman's career.  Here's the whole list in one place for easy navigation:

Similar things were said about Johnny Carson when he retired, and I know detractors tire of hearing them, but:  It really is impossible to overestimate the influence and importance of David Letterman to television.  If nothing else, he's been on every weeknight for most Americans entire TV-watching lifetime.


Late Night was once the title of a single quirky program that aired after the The Tonight Show.  Now it's an entire genre that comprises Tonight itself and a host of competing programs.

Many of these shows rely on guest- and audience-participation games, something Letterman pioneered.  In 1993, NBC lawyers may have tried, with a straight face, to claim that talk-show games were their intellectual property.  If they tried that now, they'd be laughed out of the room with the same vigor Letterman's CBS audiences showed when Dave rolled his eyes as said the words intellectual property.

The apex of late-night games remains Letterman's "Is This Anything?" — an outgrowth of "Will It Float?" that consisted of an enormous curtain opening to great fanfare and Letterman and Shaffer passing judgment on whether the thing behind the curtain (animal, vegetable, mineral, or, most often, showbiz act) was something or nothing.

"Is This Anything?" was David Letterman's shtick in microcosm.  And, man, was it ever something.

Hi, I just wanted to say hi and thank you for following my blog for such a long time. That means a lot to me. And I also wanted to ask you a favor, I'm promoting my own comic book, as you can see here:

It would mean a lot to me if you help me spread the link around, and even better yet, if you post something about this on your blog.