Revisiting the Wild Wild West: The Night of the Vicious Valentine 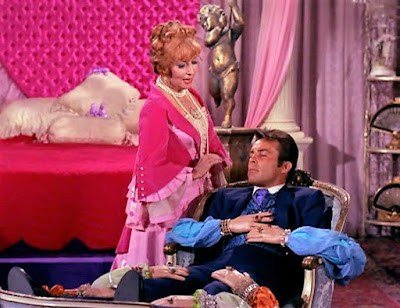 "The Night of the Vicious Valentine"
Written by Leigh Chapman
Directed by Irving Moore
Synopsis: Some of the nation's wealthiest men are being murdered in a methodical fashion. West and Gordon realize that all the men have been recently married, which leads them to society dame and matchmaker, Emma Valentine, who has a plot to take over the country.
Trey: I like this episode a lot. It's got most of the ingredients I've previously outlined:  high conception locations, colorful masterminds (and colorful henchmen) with dodgy plans, Artie in disguise, technology advanced for the sixties, barely lampshaded for the 1870s, and attractive ladies.
For some reason, the episodes with this sort of format vary in quality, but they always tend to be ones that allow Gordon pretty equally partnership with West, and this is no exception.
Jim: I'm a sucker for villains that utilize some theme in their crimes, so the premise of the Alphabet Murders really appeals to me.
The initial exchange between West and Valentine is interesting because you can almost see Robert Conrad "remember" he's supposed to be emoting as Moorehead steals the scene.  Kidding aside, I'm amazed with how well she uses her body and facial movements during the scene. It makes me wish she had reappeared in an episode alongside Michael Dunn.
Trey: Morehead did get a Emmy nomination for this episode. Yes, it's a shame we didn't get that Loveless/Valentine team-up. The ending of this episode suggests they at least considered bringing her back.
Jim: I was also impressed with the colorful outfits the costume designer put on Moorehead (and her charges) in during the whole episode. It's interesting though, because such lavish dresses don't really seem to jive with Valentine's philosophies. She strikes me as favoring equestrian wear while waving a riding crop.
Trey: Ha! Well, it's funny, watching from 2021, her goals seem more sympathetic than they likely did in the '60s, even if we must still deplore her methods and (like Loveless) her desire for a dictatorship, however benevolent or enlightened. It is likely no coincidence this episode was written by woman.
Besides Moorehead, we should note the presence of Sherry Jackson, who we may recognize from the Star Trek episode "Shore Leave." 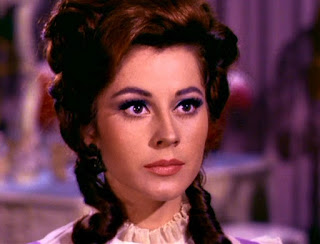 Jim: I thought I recognized her!
Trey: One element interesting element, and one that shows the evolution of my thinking about WWW, is the irrelevant inclusion of Valentine's dating computer! True, it's there to show her genius, but it doesn't really have much of a role to play besides that one scene.
Jim: Yeah, that dating computer is an odd element. I feel like it either should have been a more integral part of the plot or ditched altogether.
Trey: And prior to this rewatch I would have agreed with you! I'm not sure, now. It's inclusion makes the world of Wild Wild West not our world, but in a rather unobtrusive way. I like that sort of thing; more now than when I first saw this episode.
So, anyway, what's your pitch for a Valentine-Loveless team-up?
Jim: "The Night of the Loveless Valentine" West and Gordon are invited to a very special wedding!
Trey: Anyone at CBS reading this?
Posted by Trey at 7:00 AM No comments:

Revisiting the Wild Wild West: The Night of the Tartar 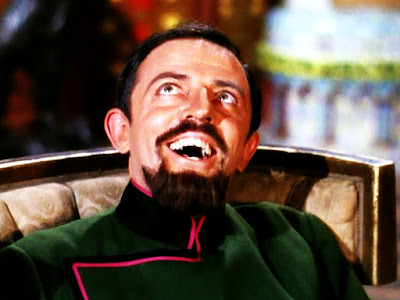 "The Night of the Tartar"
Written by Earl Barret & Robert C. Dennis
Directed by Charles Rondeau
Synopsis: West and Gordon are tasked with escorting Rimsky, Russian criminal, to Siberia for a prisoner exchange. When the prisoner is killed, Gordon hatches a plan to pose as Rimsky.

Trey: So do you think WWW still works...when they aren't even in the West?
Jim: I fear my answer to your question would involve major spoilers! But, in general, I feel like the "West" in the show is really more of an era designation than a place. Whether it works with more or less western tropes is sort of in the eye of the viewer.
Speaking of travel, I did like the effect they did when they were transported overseas. The semi-transparent, dreamy travel montage overlaid on top of a more clear, central scene of West drugged up. I think that's the first time we've seen that sort of thing in the show.
Trey: I think so, and given what gets revealed near the end of the episode, the dreamy/druggy eliding of the travel may have served a plot purpose, rather than just saving the budget and episode runtime.
Jim: True! But going back a little bit to the beginning,  I have a word of advice to any scientist, defecting spy, or whistleblowing politician who might find themselves under the protective care of West and Gordon: DUCK!
Seriously, these guys do not have a good track record for the safe delivery of people in their custody. I would love to see them working on their paperwork after some of their missions:  “Artie, does Man-Eating house need a hyphen?”
Trey: I feel like West and Gordon are remarkable good at not getting themselves killed, but are at best average for secret service agents in terms of not getting other people killed. 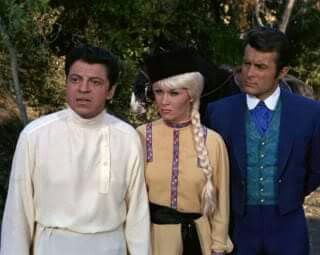 Jim: John Astin would not have been my first choice for playing a Russian Count, but his comical hamming is a good fit for this episode.
Trey: Yeah, his accent is...well, sub-everyone else's, which is saying somethin--but his acting sold the self-important, wastrel of a Russian noble.
Jim: I was surprised by how quickly he was dispatched.
Trey: Well, it was the end of the episode, but his end came swift within the scene. I don't know how else you'd do the knife-thrower's equivalent of an old fashion Western gunfight, except swift, though.
On another interesting casting tidbit, Susan Odin (Anastasia) was married to the director.
Posted by Trey at 7:00 AM No comments:

Revisiting the Wild Wild West: The Night of the Gypsy Peril 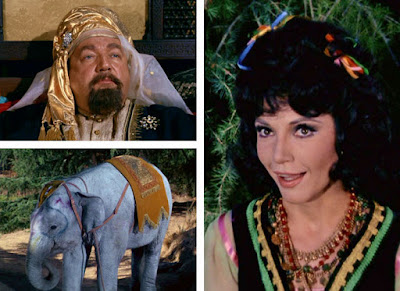 "The Night of the Gypsy Peril"
Written by Ken Kolb
Directed by Alan Crossland, Jr.
Synopsis: West and Gordon must infiltrate a troupe of traveling entertainers to regain a missing elephant at the center of an international incident.

Trey: So, to get the elephant (heh) in the room out of the way, this episode is another (like "Golden Cobra") that has some depictions that are of it's time, and not the sort of thing that would fly today. It's portrayal of the Romani people leans hard into some stereotypes. It's vaguely Arab folk aren't served any better.
Jim: Flashback Disclaimer: Anybody who wades into discussions of old television shows is eventually going to run afoul of all sorts of stereotypes. I suppose some argument could be made that television allowed for the exposure of different cultural perspectives which has gone a long way to undercutting such stereotypes, but we're not here to defend it, only to put it in it's context.
But yeah, these are the standard "Gypsies with Bronx accents" that were popular on television at this time.
Trey: All that said, the title is a bit misleading. The Romani aren't really the villains here. In fact, this episode zigs a lot when you think it might zag, which is perhaps its only saving grace.
Jim: The elephant is a cute addition, too. Its introduction and some of the dialogue at the beginning sort of sets the tone for this being a more comical episode. And again, I swear I heard some Gilligan's Island music cues in there!
It's dubious ethnic portrayals aside, this episode really charmed me. It reminded me of some humorous Bonanza episodes. And the plot with the competing factions of bandits and "gypsies" allowed for some fun deviations. (Artemis' ruse with the firecrackers, West's trapeze audition, the Gypsy Dance of Death, etc...)
Trey: Yeah, its got some fun stuff. This gang of robbers has to be the toughest West has ever faced. No matter what he does, there always seems to be one ready to get the drop on him in every single encounter!
Jim: Dr. Loveless should hire these guys!
Posted by Trey at 7:00 AM No comments: 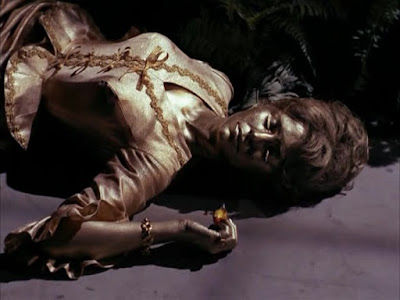 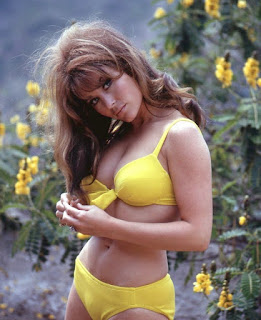 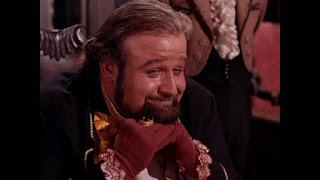