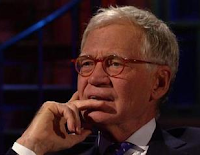 Absolutely.  A nightly interview show will do that to you, whether anyone expects it or not.  By CBS's count, Letterman has interviewed 19,932 guests on The Late Show alone.  Consider he was on Late Night 11 years before that and The David Letterman Show six months before that, and you rack up a guesstimate of interviews in the tens of thousands.  Even if 95% were softball celebrity puff pieces, Letterman's still talked to somewhere in the neighborhood of 2,000 pundits, politicians, writers, and scientists.

And he hasn't rolled over and played dead for them.  Letterman's been as challenging and demanding with Presidents as with celebrities, and that's no mean feat.  Appearances by Fox News's Bill O'Reilly following the invasion of Iraq became instant highlights because of the two's combative chemistry — and because Letterman both asked and answered questions you didn't expect to see a host grappling with.

Letterman did more than answer questions from his talk-show chair.  One week after September 11, 2001, The Late Show set the tone for entertainment programming returning to normal.  New York City's ambassador to the rest of America for two decades, Letterman gave voice to the city's perseverance, gratitude, and overwhelming sense of loss.

Given the scuttlebutt CBS may want him to host high-profile interview specials, we may not have seen the last of Letterman the interviewer.