Thoughts on Convergence and Secret Wars

Scott and I have been focusing so much on retro-post here lately, that we've sort of neglected the current state of comics books. Fortunately, old contributor Caine Dorr asked me via email about my thoughts on Convergence and Secret Wars... 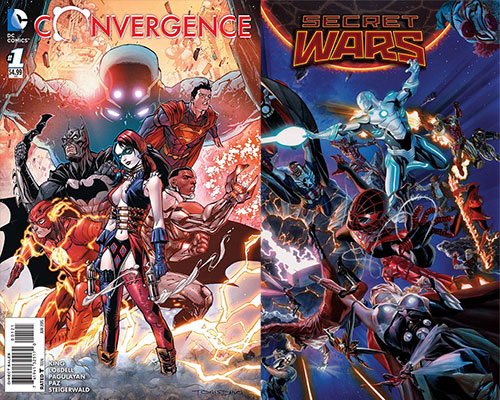 ...so today, I'm breaking our unofficial boycott of current comic news to expound on these latest (and greatest?) events... - Jim


Both events are remarkably similar (which I think is due to both companies walking down an ever narrowing path of event fatigue plus a shared limited notion about what makes a good event.) On the surface, both sound like the sort of thing I would really dig: A wide variety of writers given free range to play with a subsection of comic continuity for two issues.

And if it had been JUST that, I think I would have enjoyed the spin-off issues. But two things killed it for me:

One, most of the issues I've sampled (all DC - I'm waiting for the Sims/Bowers X-men 92 - which I expect to be pretty good - before I take the plunge into Secret Wars) feature a lot of hero vs hero stuff that I've grown tired of. (Though, I'm not sure that if the issues had been heroes vs villains if it would have been that much better. It's more of a preference than a surety.)

Two, I had zero interest in the main storyline from either company. I'm just turned off by anything with a ton of spin-off series.

Here's the thing - say DC _had_ gone with a more retro approach with retro heroes fighting retro villains for two issue: would it be embraced by today's comic market? I'm not sure. DC did something once before with Mark Waid's The Silver Age mini-series (which was a lot of fun and I'm surprised it's never been collected...) Maybe that's my answer. Looking on Amazon, I don't see The Silver Age offered as a TPB.

I'm inclined to say that there's a very small market for 2 issue mini-series featuring retro versions of the Freedom Fighters or The Seven Soldiers of Victory. 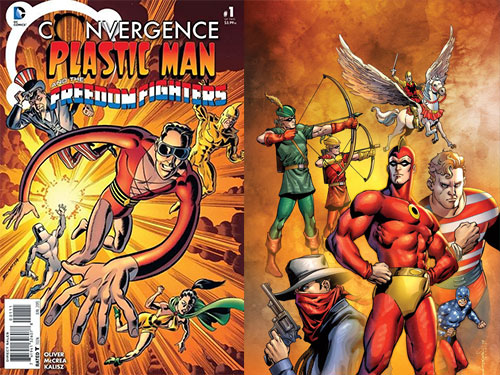 However, a longer series packaged as a prestige graphic novel (like James Robinson's The Golden Age) might work. It's takes the right writer tapping into the appropriate nostalgia while adding just enough modern sensibilities to keep it from being too, hm...Roy Thomasy (No offense to Roy. I loved his Invaders run, but something about his DC nostalgia books tend to make them read more like a Who's Who than a comic written by a guy who was an editor during the Bronze Age.) 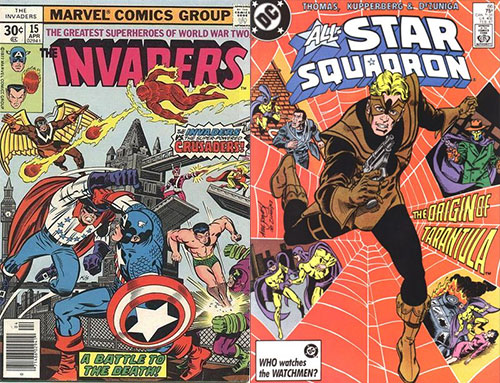 However, that's not what we got. Yeah, the convergence mini-series might have The Seven Soliders on the cover, but the storytelling beats might as well have been the DC 52 Suicide Squad. I think that's partly because there was a directive to tie the stories into the main storyline.

The only one that was close to what I would have liked to have seen for the whole event was the Shazam two issues. (Shazam's been having a good year! First Grant Morrison's fun turn on the character in Multiversity and now this..)

Again, let me repeat, I've not read any of the Secret Wars books, so I may try one tonight to see if they fall into the same setup of 70's Master of Kung-Fu vs Future Imperfect Hulk (with zero thought put into the environment of either title.)

But I'm not holding out much hope for it. If anyone out there as read the new Secret Wars stuff, let me know what you think!

Convergence would seem to promise unlimited Earths and versions of the DCU for any writer to play in and I think some folks are taking it as such. If it was true DC really might be able to (at least potentially) please everyone.

but the catch is that "evolved" line from Brainiac. So near as I can tell unless you're wanting to go for one of the wacky Elseworlds variants like Pirate Batman or something you're still basically stuck playing by the New 52 rules. For example if you want to do a story of Earth 2 Jay Garrick it's not the original Earth 2 you can play with but rather it has to be the New 52 Earth 2. Same goes for pre-Flashpoint because that "evolved" as well.

@MattComix - yeah, that's my guess too. You have to play by the New 52 rules or storytelling expectations which sort of drags down the whole event.