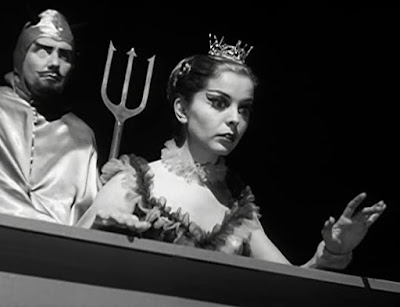 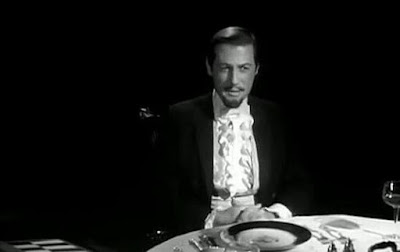 Trey: Lloyd Bochner is great here as Skull with his urbane bearing, and the silky menace of his voice.
Jim: He really is. Bochner’s screen credits run long, as he was a staple of television during the 60’s through the 80’s. One of his most notable genre roles would be in the Twilight Zone episode, "To Serve Man" where he appeared with another WWW regular, Richard Kiel.
I also like the reveal of the real Zechariah Skull (played by Bochner in makeup), like a big, black spider in a center of his web.
Trey: It works really well. I think the actors playing his puppets did a good job. Bochner plays a puppet, too. The bit where West grabs his invisible "strings" and Bochner sort of floats up then slouches down when released works surprisingly well.
Jim: A feel like there's an acting class exercise in that, but you're right: everyone gets an "A."
Trey: Skull would have been a great villain to make a return appearance. We don't even see the body, so it has the perfect setup for that.
Posted by Trey at 7:00 AM