Revisiting The Wild Wild West: The Night of the Sudden Plague 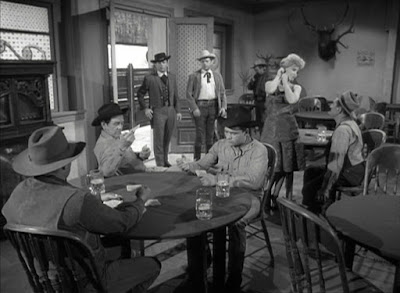 "The Night of the Sudden Plague"
Written by  Ken Kolb
Directed by Irving J Moore
Synopsis (from Wikipedia): Upon arriving in Willow Springs, Jim and Artie find that a band of thieves have struck and are somehow managing to paralyze everyone in the entire town.

Trey: Here we are at the end of Season 1 with probably the most "Western" episode we've watched so far: An outlaw gang, several one horse towns, and an abandoned fort in the desert.
Jim: That stone fort is quite the set! Is it a real place? Was it ever used anywhere else? Seems like it would be ideal for a Star Trek episode.
Trey: You are apparently not the only one to think so! The fort was attacked by the Gorn in the episode "Arena." It's located near Vasquez Rocks . It was built for the 1956 film Tales of the 77th Bengal Lancers. It also showed up in episodes of Bonanza and Mission: Impossible.
Given your stated preference for episodes with fewer Western genre elements, what did you think of them here?
Jim: Oddly enough, I was all in at the beginning of the episode, but as it moved into the Fort, I sort of got cold on it.
Also, I feel like I counted three instances where West could have solved issues faster by using a gun. I'm not sure, but I think he only uses his gun once in the entire episode when he fires a warning shot. There were times when it just felt like the writer forgot West has a gun.
Trey: I think it's less that and more the propensity of 60s TV Westerns to prefer fistfights over gun battles.
Jim: I think you're right.
Trey: The episode is also less "spy-fi" than a number of others. It's really more a Weird Western. It could have been an episode of Brisco County Jr.
It was written by Ken Kolb who wrote "The Night of the Burning Diamond" and is a similar "pulp" sort of plot with a mad scientist with a science fictional invention that winds up being used for mundane criminality. It could have been a Doc Savage story, now that I think about it. 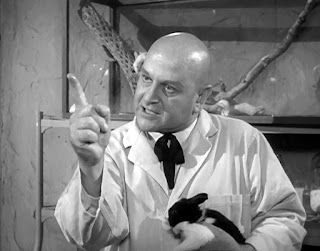 Jim: Yeah, this definitely has a pulp feel to it with a criminal gang working with a mad scientist. The lovely Asian assistant and germ culture feels  like it is from that sort a story.
Trey: As an episode, it's well-paced in general and has a number of good action sequences, which likely show the hand of both Kolb and director Irving Moore. It has the humor Kolb evidenced before. It is probably inferior to "Burning Diamond" in terms of structure though.
The mad doctor feels underdeveloped. I understand why they wanted to not have him show up much because they wanted to save the reveal that Kirby is the villain, but it winds up making him less entertaining than most of the villains this season.
Jim: The double reveal of Kirby as 1) the real mastermind and 2) a bald Dr. Evil type villain reminds me of "The Night of the Inferno."
Also, Kolb must  really liked the imagery/idea of unmoving people because he used it in "The Night of the Burning Diamond" too!
Posted by Trey at 7:00 AM