Revisiting the Wild Wild West: The Night of the Murderous Spring 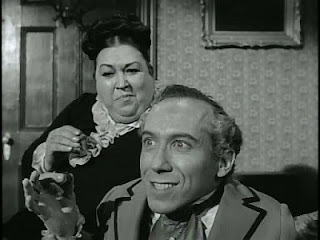 "The Night of the Murderous Spring"
Written by John Kneubuhl
Directed by Richard Donner
Synopsis (from Wikipedia): West and Gordon meet Dr. Loveless for the fourth time. The doctor has now invented a hallucinatory drug which, when used on Jim, makes him believe that he has shot and killed Artie.

Jim: This episode starts up with one of the more comical openings as the plus-sized Miss Kitten Twitty is laughed at by the locals as she gets off the carriage. Then the hotel clerk laughs at her as she signs into the hotel with X signatures. Then we see Jim West, acting gallantly to help her with her really heavy bag, has unwittingly carried Professor Loveless into the hotel room.
Trey: It's notably comical given the nastiness of Loveless' plot this episode. It's such a change in character you might think it was a different writer, but no, it's Loveless' creator and most frequent chronicler, John Kneubuhl. He does address Loveless' changed goals and greater bloodthirstiness in the episode.
Jim: He usually had a noble reason for his brutality, but in this one, he vows to kill every man, woman and child in America.
Nice use of the song between Loveless and Antoinette as we hear the screams of violence as the staff kills each other!
This is another episode were a number of empty sets and short haunting music cues, has a bit of a Twilight Zone feel to it. Also, like the Puppets episode we get a bit more “acting” from Conrad in various scenes. Was this in fact the same director?
Trey: It was not. Actually, It was Richard Donner of Superman: The Movie and Lethal Weapon fame! I can see what you're saying, though for me the weirdness being the result of a drug made me think more of The Prisoner.
Jim: Richard Kiel appears to have been replaced by the "deaf mute" orderly. I suspect this was done to reduce costs as Kiel could ask for more due to his speaking role in a previous episode. It’s unfortunate, because with a bit of script tweaking, all of Kitten’s lines and actions could have been performed by Voltaire. 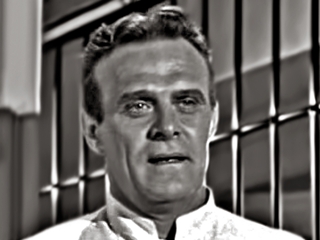 Trey: Interestingly the deaf mute guard is played by Leonard Falk--Robert Conrad's father!
Giving Kitten's lines and actions to Voltaire would have deprived us of the standard Loveless episode trope of his assistant being convinced to betray him by West. Can't have Loveless without that!
Jim: Well, that's true!
Here's an interesting tidbit: According to [Phoebe] Dorin, Michael Dunn [Loveless] saved her from drowning during filming of this episode, plunging underwater to tear her free, when her costume became entangled in machinery used to sink a boat on the set.
Trey: The lake that happened in at the end of this episode is actually the same man-made body of water that served as the lagoon in Gilligan's Island. It was later filled in and covered over with a studio parking lot.
Overall, I'm a bit disappointed with this last Loveless outing in the first season. It's not bad, but a bit of a let down after the strong last two episodes we've watched. I do think it has more 60s Zeitgeist to it than recent ones.  A drug that would drive a man crazy in his shaving water or drugs attached to migrating duck, seem realistic examples of the sort of crazy stuff the CIA was pulling to try to get rid of Castro!
Posted by Trey at 7:00 AM