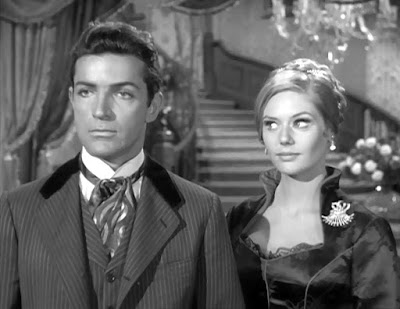 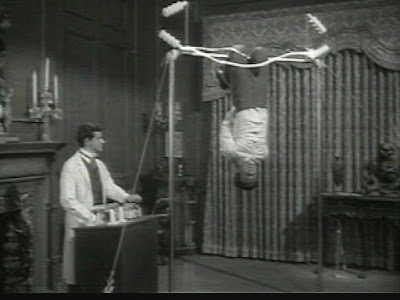 Jim: As a kid, I found this episode exciting as Midas’s super speed was an early example of a character with “super powers” on a television show. Midas was a sort of evil Old West Flash.
Trey: Kolb gave his inspiration as the H.G. Wells short story "The New Accelerator." That's the first real connection of the show to Victorian science fiction I can think of.
The producer on this episode was Gene Coon, who would go on to write the story for the third season Star Trek episode "Wink of an Eye" with a similar super-speed angle. This episode is a bit more rigorous in thinking through it's premise than "Wink of an Eye," though.
Jim: Is it my imagination or is the odd clicking sound that Midas says is people talking not the same foley sound used for Star Trek communicators?
Trey: Yeah, it's the same.
Jim: The fight choreography is a little more campy in this episode, especially when we get to the West’s attempt to escape Lady Margaret’s house, but I like it. It fits the tone of the episode.
Trey: There's a bit of a Batman tv series feel to them. I think we're going to see more of these sorts of "fun fights" in Season 2.
Jim: Midas's death by super-speed side effect is set up well early in the episode. It makes for a good, quick resolution.
Trey: Death by the use of his own invention is a classic mad scientist end.
Posted by Trey at 7:00 AM