Today Trey Causey brings us Part 3 of his Bronze Age Alphabet, which turns out has a little Halloween relevance. Check out Parts One and Two if you missed them. 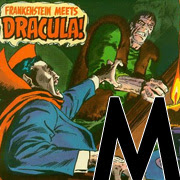 M is for Monsters:
We’ve mentioned the various four-color gargantua back at G. Now, let’s take a moment to consider the other monsters that menaced the comics world after the loosening of the Comics Code. Marvel tested the water with a living vampire (thus, technically not undead)—Morbius—first appearing in Amazing Spider-Man #101 (1971), but graduating into his own Adventure into Fear with #20 (1974).

After that the Big Two went after the famous monsters of filmland. Dracula went from villain to antihero in multiple Marvel mags starting with 1972's Tomb of Dracula. Marvel’s wolfman was the Werewolf by Night debuting in Marvel Spotlight vol. 1 #2 in 1972, but ultimately getting his own title. We got dueling Frankenstein’s Monsters in January, 1973—Marvel gave life to The Monster of Frankenstein, while DC nurtured the Spawn of Frankenstein in Phantom Stranger vol. 2 #23. The Living Mummy, who shambled through Supernatural Thrillers starting with #5 (1973), did genre double-duty as sort of blaxploitation and horror. The weakest of these celluloid reimaginings was probably Marvel’s Manphibian—a Gill-Man wannabe—from Legion of Monsters #1 (1975). A possibly film-inspired footnote (if we count German silent film—and you know I do) is the Golem, unearthed in Strange Tales vol. 1 #174 (1974), though of course the original Jewish folktale is the ultimate source.

There were also plenty of original monsters. Dueling swamp monsters rose from the muck in 1971 with Marvel’s Man-Thing and DC’s Swamp Thing. Marvel’s Scarecrow almost got his own series but instead emerged from a painting into Dead of Night #11. DC sent monsters into combat in World War II as the Creature Commandos. And what creature catalogue would be complete without acknowledging the ghosts, ghoulies, and assorted grotesques that graced the pages of the various horror anthology comics throughout the era? 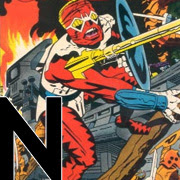 N is for New Gods:
"There came a time when the Old Gods died…" the narrator tells us in Kirby’s New Gods vol. 1 #1 (1971). Maybe reports of the old gods’ deaths were premature. Instead, the Norse and Greek Pantheon mainstays of comics since the Golden Age were being forced to share the increasingly crowed heavens. Marvel added the Egyptian, Chinese, Indian, and Slavic gods, among others, as the gods of Earth formed sort of a United Pantheons to strategize for the return of the Celestials. This led to the creation of the Young Gods in Thor vol. 1 #203 (1972) who were intended to exemplify the best of humanity. Marvel also took inspiration from the pulps, borrowing Set wholesale(wholescale?) from Robert E. Howard, and the inspirations for tentacled horror, Shuma-Gorath, and the Elder God, Chthon, from HP Lovecraft.

But those are all old mythologies, new to comics though they maybe be. Jack Kirby wanted to give us something brand new—and he did it in his so-called "Fourth World" spanning multiple titles, but centering on the titular New Gods. The Manichean struggle between Apokolips and New Genesis has gone on for over a decade after their creator's death, and—Final Crisis(es) aside—will probably go on for sometime longer. Kirby created another pantheon of new gods (but these masqueraded as old gods) in the von Daniken inspired Eternals in 1976. The Eternals were created by yet another group of new gods—the enigmatic gang of giant, weirdly armored super-aliens called the Celestials, who liked to judge things Old Testament-style. Jim Starlin, taking inspiration from the Book of Kirby, brought forth his own new gods in Iron Man when he introduced Thanos (a Darkseid stand-in) who was born of a hereto unknown branch of the Titans of Greek myth, though they were later retconned to be a splinter group of Eternals. 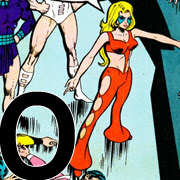 O is for Out-there Outfits:
Comic book costumes have never been what you would call demure or conservative, but in the Bronze Age comic couture went to a whole new level. It’s cool that Luke Cage was secure enough in his masculinity to wear a canary yellow Pirate shirt, but are we to assume the metal head- and wrist-bands, and chain-link sash are a statement about the place of the black man in 70s America—or a case of accessories making the outfit? Do the psychedelic raccoon eyes of Dazzler, Kitty Pryde, and Marionette really hide their identities, or just get them noticed at the discotheque? And speaking of Dazzler, this fashion forward lady also sported mirrored roller skates, and a jumpsuit—excuse me, Parisian nightsuit. Another disco-victim was the Spider-Man villain Hypno-Hustler, who looks like he gave up a promising career with Parliament for a life of crime. So you don’t think I’m (just) picking on disco, I’ll push out onto the runway: Satana—in an oh-so European, precariously cutaway unitard and shaggy, fur boots assemble, followed by Red Sonja—in a Hyborian Age haute couture scale mail-kini.

Let’s not play favorites, though. DC had more than its share of questionable fashion statements. Supergirl did a lot of fashion don'ts, beginning in Adventure Comics vol. 1 #397 (1970), as she embarked on a series of reader designed costumes. She went through six costumes and an evening gown before settling on her outfit for the rest of the 70s: hot pants, a chocker, and a V-neck billowy-sleeved shirt. I blame those kids from the future she was hanging out with, ‘cause the Legion of Super-Heroes introduced Bronze Age readers to a brave new world of fashion with the 70s redesigns of Dave Cockrum, further (uh) refined by Mike Grell. Let's run the list: Extensive cutouts? Threatened wardrobe malfunction? High collars? High collar, no pants, and Peter Pan shoes? That’s a big, synthesized, computer-voice "AFFIRMATIVE" to all of the above. The prize for most out-there Legion outfit goes to Cosmic Boy's duds debuted in Superboy vol. 1 #215 (1976) which are best described as...well...uh—a black bustier, and gloves affair? That’s the best I can do, really. You’re just going to have to google it. In fact, Cosmic Boy may win the whole DC category, beating out swordswoman Starfire's green-dotted, cutout partial unitard, and Warlord supporting cast member Shakira's fur bikini with booties. 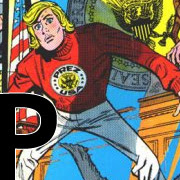 P is for President:
The American President had appeared before the Bronze Age—most famous perhaps is Kennedy’s post-assassination appearance in Superman—but the push toward greater topicality in the Bronze Age had real (and fictional) presidents turning up more often. President as protagonist-in-chief had its highwater mark in the 1973-74 DC series Prez: First Teen President. Prez (both title and first name) Rickard dealt with the tough issues of his day—legless vampires, and Russian chess-player supervillians, for example. He also appointed a Native American, Eagle Free (complete with war bonnet and teepee), as head of the FBI, and his own mother, Martha, as VP. Compared to that, the term of alternate earth Kyle Richmond (the Squadron Supreme’s Nighthawk) is almost uneventful—except for possession by an alien intelligence leading to suspension of the Constitution, and subsequent conquest of the whole planet. I'd almost be willing to sit through the CSPAN coverage of the Congressional hearings after that one...

In the realm of presidents you might actually have studied in school, FDR got a retroactive role in the creation of the Justice Society of America in DC Special #29 (1977). In 1973, Richard Nixon was embroiled in Watergate; but in the pages of Captain America that same year, the nefarious Number One of the Secret Empire was implied to be the President under the hood (taking the "Tricky Dick" thing to a whole new level!)—just before he committed suicide in the White House.

I want to thank you for continuing this -- highly enjoyable and brings me back to the first comics that I enjoyed as a wee lad.