Revisiting the Wild Wild West: The Night of the Man-Eating House 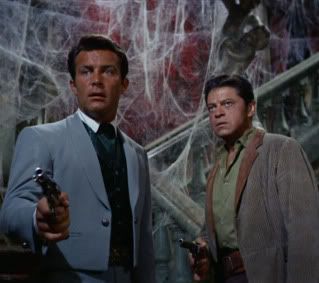 "The Night of the Man-Eating House"
Written by John Kneubuhl
Directed by Alan Crossland Jr.
Synopsis: While stopped for the night during the escort of an infamous traitor back to prison, Artie has a strange dream where he, Jim, and a sheriff chase their prisoner to an old abandoned mansion which is haunted by the spirit of a dead woman.

Jim: As a kid, the combination of a creepy story with a supernatural angle made this one of my favorite episodes. As an adult, I still  like it, though for the historical references and slow build up.
Trey: My initial exposure was not so positive! First though, a little setup for our audience:  This is the "Paranormal Episode" (as TV Tropes calls it) common to to classic era tv. You may quibble that with a handful of episodes, WWW has flirted with the paranormal, and I would agree, but this follows the typical form of those sorts of episodes: no other explanation is offered for events is available except the alternate cliche of "Was it All a Dream?"
The dream angle was added by Kneubuhl to appease the network who wanted the episode softened a bit so as not to scare the kids.
When I first saw this episode, I had the sort of antipathy I typically have toward those sorts of episodes. Watching again now, decades later, I'm not quite so down on it. It still isn't one of my favorites, but I find it enjoyable despite the flaws I see in the premise.
Jim: The episode does a good job creating a series of creepy scenes to build tension--in a network approved way. The crying house is a notably good gimmick. And the build up of strange events in the house is well done. I'm getting a real Haunting of Hill House vibe initially.
I also liked the "Telescoping Time" explanation for some of the strange phenomena they are experiencing. It actually feels like the type of 19th Century "scientific' reason someone might give for such strange occurrences.
Trey: I liked that, too. A sort of  "Carnacki: The Ghost-Finder" parapsychology feel to it, appropriate to the era."
Jim: While this episode gives Conrad a lot of good lines to work with, I noticed that the writer's gave the important diary exposition to Ross Martin, which he performs well.
Trey: Yes, and Artie is the real Mulder here to West's more skeptical Scully. Another thing in the dialogue here: West is really antagonist toward Liston Day. This is a guy that's chill with would-be mass murders all the time, but side with the Mexicans over the Texans and he wants you dead! I kept thinking there must be something personal to it, but nothing is ever revealed. 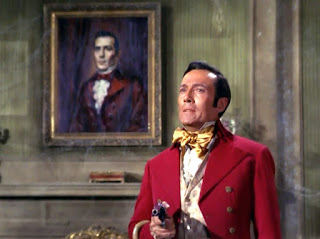 Jim: Could be he's angry because he knew there wasn't likely to be any beauty to fall for him in a prison transport.
Speaking of Day, Hurd Hatfield was good in that role.
Trey: Yeah. He's role here is interesting because he played Dorian Gray in the 1945 film adaptation.
Posted by Trey at 7:00 AM