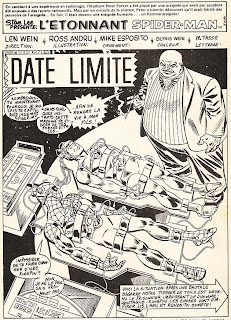 To me... the "ultimate" Spider-Man comic was when it was drawn by Ross Andru.

Although I greatly enjoyed Spider-Man by both Romitas... when started reading the tales of the Amazing Spider-Man in the 70s... it was beautifully drawn by Ross Andru.

I was a little too young when John Romita was drawing the book... so although I saw some of his work years later... the definitive Spider-Man to me was as he was when drawn by Andru.

Although JRJR also did a great job on Spider-Man... especially when inked by Jim Mooney.

But given the choice... I would still pick Ross Andru as the definitive Spider-Man artist in my book.

Not just because of the way that he drew Spider-Man... but also because of how he drew the whole cast in the comic.

It also was the time of some of the coolest villains ever... the Tarantula, the Cyclone, Mirage, the Grizzly.... okay... maybe not the Grizzly. Even back then I thought the Grizzly was a pretty crappy villain.

Although one of my favorite comic from Andru has to be Amazing Spider-Man #153, although it has none of those cool villains. Don't ask why... I still can't explain it today.... but I loved that comic.

I also loved his backgrounds... especially his cityscapes as Spidey was swinging above the city. 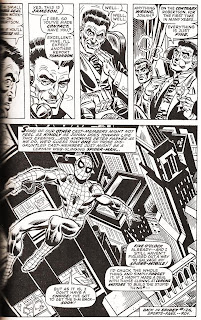 And let not forget the Spider-Mobile. ;)

It cracks me up just thinking about it.

I also discovered some of Spider-Man's more classic villains during Andru's run like Mysterio, the Kingpin, the Scorpion. Although to me, they were all brand new characters since it was my first time encoutering them in them comics.

I most especially loved the first time I saw Doc Ock (Amazing Spider-Man #157). Loved the cliffhanger with Spidey falling to his death on the last page. Although, many years would pass before I was finally able to read the conclusion of that story.

Strangely enough.... I don't have that many comics by Andru. As a kid, I got some of his Spider-man work... some Marvel Team-Up... and a few Wonder Woman issues.

But through the years... from time to time I find some gem that Andru did in his carreer. 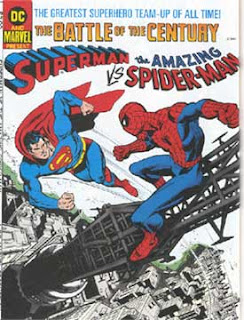 For example when I got the Marvel/DC Crossover Classics TPB, I got quite a kick from reading the Spider-Man/Superman tale masterfully pencilled by Andru.

More recently... I got the Essential Punisher Vol.1 with a few cool Andru comic... some of which even featured Nightcrawler and some of the X-Men from way back then.

So from time to time... I can still treat myself with some "new" Ross Andru comics that I have never read before.

Special Note from Jim - Pierre sends his regrets that his duties at work this week prevented him from preparing a tribute to Dick Giordano another great artist from the Bronze Age who passed away a few days ago.
Posted by Jim Shelley at 9:39 PM

Yeah, Ross Andru is a cool artist, but the Grizzly a crappy villain?

Back in the 80's (I think it was the Spectacular title, but it might have been Web) I read a Grizzly story were he got out of jail and was a laughing stock to everyone. He got together just enough money to have his mouth eaten suit fixed so he could fight Spider-Man. He wanted some respect and a victory, to show Spidey's smarts he figured out what was going on then played dead and Grizzly threw him down happy to finally get a win. It was sort of a comic re-mix of Ragging Bull and Requiem for a Heavyweight. With a good enough story no villain has to be crappy. :)

You got me there.

But as a kind I was never too crazy about the Grizzly... or the Gibbon for that matter. ;)

What! No love for the Gibbon?!

Dude! He was so cool - he had the powers of a Gibbon, what could be cooler than that?

Seriously though - I think RKB is right - there are no bad villains, just villains written badly. There were a lot of villains that came out during this Ross Andru run on Spider-man that were either uninspired or just not well thought out.

What a wonderful thing this internet. I typed in Ross Andru and lo I come across someone who loves and thinks of Ross Andru as the definitive Spider-Man. Just like me. I hear tell that Avengers director, Joss Whedon thinks the same thing. Love me some Ross Andru!

The way he drew hands, the dramatic spidery poses he drew. And then there's the Peter Parker face which as always, to me, been THE most fully realized superhero alter ego in comics history.

The first comic I ever bought was Amazing Spider-Man #134 when my mother gave my brother and me a quarter a piece plus two cents for tax to go down to the convenient store. I brought home this book and I was hooked. Still am. Thanks for the post.

My first issue was 133, followed shortly by 136. No doubt, Ross Andru is the definitive Spider-Man artist for 70s kids. And, yes, this tech thing is great.