This article is another one of Caine's explorations into the Lost Universes of defunct companies. You can read other Lost Universe articles here. - Jim

A few weeks ago we narrowed in on the Comics Boom and focused on the PATRIOT archetype. With the Patriot we discovered that only one of the LOST UNIVERSE publishers had really attempted to publish a book staring a character wearing the Stars & Stripes (or other flags). Today we'll be looking at THE DARK AVENGER and, with but a few exceptions, the phenomenon is nearly opposite of that of the Patriot. Nearly ALL of the LOST UNIVERSE publishers put out comic books starting Dark Avenger type characters.

The characters within the Dark Avenger archetype all take on different styles (some using tech, others relying only on their wits, some have powers or an intense "gimmick"), which is another near direct opposite from The Patriot archetype (the patriot characters were much more alike than dislike) as nearly all of the patriot character's powers were 'internal' and not really shown to the readers (strength, stamina, invulnerability) contrasting those Dark Avenger characters who did have powers. While their methods may be very different, the motivations of the majority of the Dark Avengers characters are all very similar as they feel the need to take the law (or justice) into their own hands due to the lack of it's presences in their life.

Some do it really just once, while others adopt it as a lifestyle and continue on in the form of a crusade...

For the purposes of this article we'll remove both Tekno & CrossGen from our list of LOST UNIVERSE publishers as both publishers took a unique approach when considering what titles to produce and how they would manage themselves as a comic book publishing company.Neither of them have a real strong Dark Avenger type character that stands out, as neither of them were looking to deliver 'standard' comics to the fans.

Of course, all of the Dark Avenger type characters owe (at least a little something) to those who came before them such as; The Phantom, The Shadow, The Green Hornet, The Spider, The Avenger, Zorro, and more... 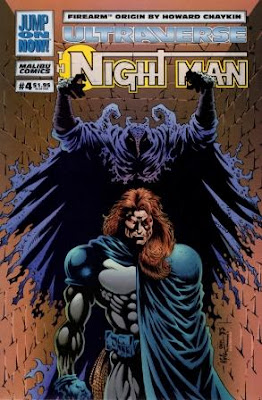 The Nightman may be one of the more pure distillations of the archetype that's been published in quite some time (the comic version, not the televisions version). Johny Domino awakens from an accident with a peculiar type of brain damage that now allows him to "hear" evil thoughts (which he can't prove even exist without sounding crazy him self) motivating him to don a costume and prevent those evil actions from ever taking place. The book it self read like a 'year one' tale that showed Johny Domino growing into and adapting his Nightman persona.

A bit closer to 'The Spider', X was shrouded in mystery. His intentions were never quite clear, as he'd save a man on one page, only to shove a man out a window to his death on another. He tended to 'mark' his victims (sometimes their picture, a mirror that they use, or even their face) in the form of an X. X, whose law is: that one mark means a warning, the second one death, takes on a collection of business, law, mob, assassins and politics. X is the kind of character, who's creation was drawn from many other sources (all good ones), X is a bit Wolverine, The Punisher, Batman and more all rolled into one.

Born in America, Alexis Devin was raised in Japan, and trained in the arts of ninjitsu from the age of 6. She studied intensely, not to be a mercenary killer, but to force her young body stricken with polio, back to life. As she grew she dreamed not of adventure and intrigue, but of a simple, full life. One day those dreams were shattered. Alexis found herself caught in the centre of a murderous power struggle between the lords of Japan's underworld, the mighty Yakuza. Forced to fight for her life, she became Whisper.

It is Los Angeles, 1938, and the world hovers on the brink of war. Famous adventurer and scientist, Clark "Doc" Savage Jr., builds a one-man jet pack, which will allow a man to fly. Before it can be properly tested, the prototype is stolen by enemy agents. With the authorities in hot pursuit, they are forced to hide the pack in an airfield hanger, where it is discovered by daredevil pilot Cliff Secord. Not knowing its origin, Cliff adopts the identity of the Rocketeer. He acquits himself so well against the Nazi spies that when Doc Savage finally tracks him down, he allows Cliff to keep the device, feeling he has earned it and can continue to do good in the world with it.

Hmmm... Does the Rocketeer really qualify as a Dark Avenger type?

@Reno
Yes. The Rocketeer qualifies. Trade the rocket in for a horse, the pistol in for a whip, the Nazi's in for the Spanish government and he's Zoro. :)

I raised an eyebrow about the Rocketeer too. He seems to be a real curveball compared to the others on this list, and disagree that he's a future-tech Zorro.

Especially when one considers the pulp and serial origins that comprise much of the character, Rocketeer seems to fall into more of a "superspy" or "unlikely hero" (Spider-Man-esque) archetype. The motivation and methods aren't even close to that of the standard "dark avenger" tropes.