Comics on the iPad

In honor of the nice folks over at Comic Zeal using our comics in some of their recent news update we here at the Flashback Universe thought that you'd like to be informed & updated on the subject of comics on the iPad. 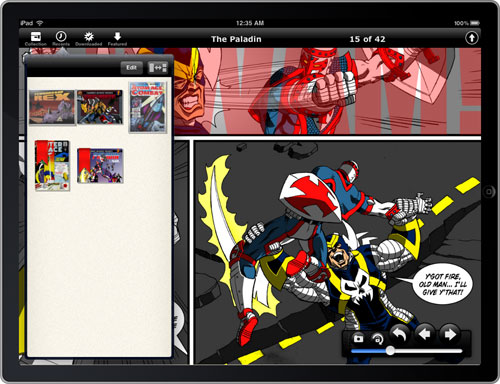 They go on to explain..

"Comic Zeal 4 is able to read CBZ,ZIP,CBR and RAR files natively. So you can just fire up SyncDocs on your PC or Mac, drag in a whole bunch of CBZ files and import them into Comic Zeal. Comic Zeal will still need to process the comics and resize the images, although they’re now 60% larger than they were before. This process is going to be optimized and tweaked once we get our hands on a real iPad. At the moment we have no idea how long it will take to process the comics and it could be that on release, using Comic Zeal Sync is still the best option."

CBR
"CBR News reached out to many players from across the downloadable comics sphere for early reactions to the news of the iPad and found many responses as to what the next step for publishers and content providers will be. Although one thing was generally agreed upon, fans can expect everyone to get..."~cbr 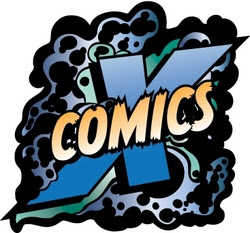 NEWSARAMA
"As Apple announced it's iPad device today, Comics by ComiXology, the leading iPhone application for buying and reading comics, already has an interface for the bigger iPad screen in development."~newsarama

WEEKLY CRISIS
"In theory, the iPad, and the slew of alternatives in the pipes, has a lot of potential for changing the comic book industry. Currently, there are multiple comic book related apps available for the iPhone that can be ported over to the iPad at launch. These include the likes of comiXology and Robot Comics, among others."~weeklycrisis

BRAIN STORM TECH
"Now that we’ve all seen the iPad and debated its design merits, let’s cut to the chase: This thing will rise or fall on content. If Steve Jobs can get a bunch of cool books and apps on the thing, we’ll want one. If not, we won’t. Where will His Steveness get some of those books? I say the same place he’s gotten so many movies and TV shows for iTunes in the past: Disney."~brainstormtech

CRAVE
"One of the key features of the new Apple iPad is the introduction of Apple's new iBooks application, which promises to be both an e-book reader and a storefront for digital books. This obviously leads to a comparison between the iPad and that other famous e-book reader, the Amazon Kindle. But it seems to me that the only real advantage the iPad might have over the Kindle is that it's in color, which doesn't make much of a difference with simple black-and-white text. But what about books that depend on color, art, and illustration? Indeed, what about graphic novels and comic books? Is the iPad the perfect platform for digital comics?"~crave


We've covered different" digital tools", available now here & here, that should be known to any up and coming comic book creator. With the iPad on the way here are a few more that could, hypothetically (we don't have an iPad to test our theory), aid you in creating, marketing, & delivering comics on the iPad from start to finish:

CLICK METER:
Web analytics is important to keep track of your websites. ClickMeter is a link tracking tool that focuses on tracking links for your website so that you can monitor relevant clicks. This app quickly sees which of your links are more efficient in driving incoming traffic to your site.

FLIXTIME:
Creating your own video or photo slideshow is a cool way to share your pictures with friends, family, readers, fans, and sponsors. Flixtime is a web app that lets you create videos from photos in just three easy steps. All you need is to choose your photos, upload a tune, then click render to create your video.

PICMELEO:
There are a number of excellent image editors online and Picmeleo is no different when it comes to ease-of-use and number of features. It is a light-weight photo editor that lets you crop and scale images, adjust color and brightness and apply various filters.

The iPad isn't the only name in the game. There are lots of tablets, some out now, some slated to come out this year, others still in development. The "wordle" above names but a few of them. We've blogged about upcoming tablets here & here on the FBU before. You really can't scan the internet without running into it.

MASHABLE:
"The Apple iPad cat is officially out of its bag, but it’s not going to be the only tablet game in town. There are a number of other devices out there..."~mashable

WIRED:"We’d be naive to think manufacturers were twiddling their thumbs while Apple pimps out its iPad. Sure enough, there could be as many as 50 tablet devices from competing..."~wired

Really the only question unanswered is when and how are DC going to get in the Digital Comics game? Do any of you have any ideas or theories? What about thoughts regarding comics on a "pad" or "slate"? Will the bigger screen enable more of you to enjoy comics digitally?

We'd love to hear your thoughts.

There are a number of latest technology really making a good support to the comic field and it really make a great entertainer to all children's. When they fear on any school work the parents can make a good support with the same technical advice.