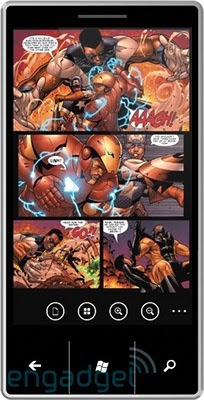 Recently, Microsoft announced that they were getting (back) into the mobile phone business in a big way with the introduction (read - replatforming) of their Windows Phone 7 Series phones. Yesterday on Engadget, many of the partners for this new platform were presented (Pandora, Netflix, Shazam...).

Among the screenshots was this one of what is apparently a Digital Comics reading application showing scenes from Civil War.

At this moment, we are unsure if this is an existing digital comics app (ported from the iPhone) or if this is something Microsoft created wholly on its own.

UPDATE - the app appears to be developed by Graphic.Ly whose Digital Comic viewing application has been discussed by Caine here before...

Another new app designed for Graphic.ly -- a community for purchasing and discussing comic books -- will enable consumers to buy digital comics and view them on a Windows 7 laptop or carry them around in their pockets on a Windows 7 phone. The app includes a hardware -accelerated deep zoom that can deliver high-resolution imagery over low bandwidth. So whenever the user elects to pan in on a comic graphic, deep zoom is able to pull down the right resolution.

Interesting - so Graphic.Ly is getting quite a jump on this aren't they?
Posted by Jim Shelley at 7:40 AM