Revisiting the Wild Wild West: The Night of the Eccentrics 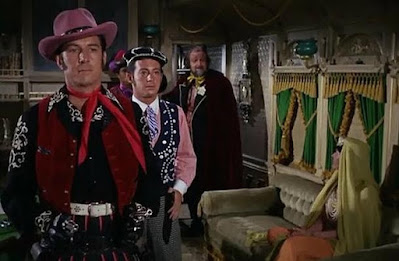 "The Night of the Eccentrics"
Written by  Charles Bennett
Directed by Robert Sparr
Synopsis: Jim and Artie find themselves pitted against the Eccentrics, a league of assassins commanded by the theatric Count Manzeppi with a plot to kill the Mexican President.

Trey: Here we are at season 2 and the Wild Wild West is now in vibrant, 60s TV color. This episode was the sixth produced, but CBS chose to air it first, probably because it made such strong use of that color. What better showcase for it than villains out of a circus sideshow?
Jim: It's a good choice. There is an almost Batman-like use of color in this episode with the carnival scenes and costumes. I will say, I wasn't wild about Jim West's gray suit in the first few scenes, but everything else would have made a big splash on 60's color televisions. One slight slip up is Artemis's make up when he's dressed as a guard. It doesn't look quite right which makes me think the make up department was still getting the hang of color television.
Trey: This episode introduces Count Manzeppi who was intended to be a recurring villain like Loveless. He does return, but only once. The critical reviews on this episode were not great. By and large, they seem to have not liked a shift to a more fantastic material.
Jim: Victor Buono definitely had the chops for the role.  I like his appearance here much better than in Season one's Night of the Inferno. I'll go so far as to say, if you can only watch one WWW episode with Victor Buono that has a face mask reveal scene in it, make it this one!
Jim: I find the critical reviews interesting because it didn't really feel that more fantastic than a number of other episodes so far. With the classic introduction to all the main villains in the first few minutes, it actually felt like a Kenneth Robeson Doc Savage pulp story. I think Count Manzeppi would have made a fun recurring villain.
Trey: Well, you have to remember, we only rewatched a selection from season one. Also, this episode doesn't have Victorian science fiction, but maybe magic.
As much as I like this episode and Manzeppi, I have to say he does irritate me a bit in the context of the show because it's never is clear whether he uses magic (which would be a departure from S1, but ok) or stage magic plus some Loveless-esque Victorian technology. He seems to dabble in both. It's like the writers don't want to commit. As I recall this is not an uncommon problem with some classic TV shows faced with stage magician villains, though I can't immediately think of another specific example. 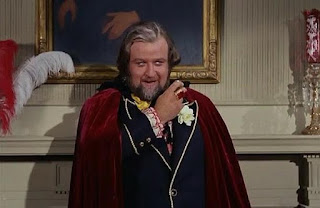 Jim: I found this a little perplexing, too. On one hand, you could say it's all gadgets and stage magic, but his finger controlled security screen seems to stretch the concept. One fun "blink and you'll miss it" scene is when Manzeppi is having trouble with the security screen and he crinkles his nose - not unlike Samantha Stevens on Bewitched. I don't know if that was a Buono ad lib, but it's a cute touch. (And does add fuel to the whole, is this really magic, question.)
Trey: Some historical notes here: Juarez is President of Mexico (he died in office in 1872) and West tells us it has been 4 years since Maximillian's death (June 1867), so this episode must take place in 1871-72. The phonograph is (again) an anachronism, though the music played as the amusement park "The Flying Trapeze," was first published in 1867.
Speaking of music, the score is more energetic here, I think. They did record new music for this season.
Trey: This time the young woman betrays the villain for money, not attraction to West!
Jim: That was a nice change of pace.
Trey: Richard Pryor is here in an early tv appearance, though it's Ross Martin that voices the dummy, Julio. 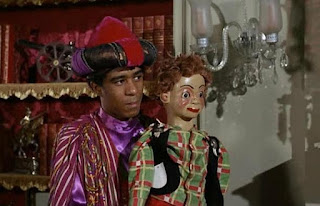 Jim: It was fun seeing Pryor in this role, though I must confess, I'm not sure what his exact purpose in Manzeppi's gang was.
Trey: I was waiting for him to kill someone with ventriloquism.
Jim: I liked the way they showed Manzeppi had escaped. It was a playful final touch to a playful episode.
Posted by Trey at 7:00 AM