Ideas for Wildstorm's Integration into the DCU

There are some obvious uses of of Wildstorm characters in the DCU.  Some might be a little too obvious like suddenly adding Gen13 characters into the Titans or having Apollo befriend Superman and hang around with the Justice League.  I'd fear fan reactions to those set ups.

One "obvious" integration I wouldn't fear? 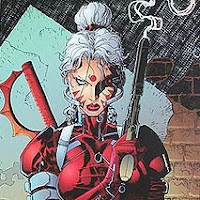 ZEALOT (and by extension the Coda) being seen in the pages of WW, living as Amazonians.
"Zannah took the name Zealot when she formed a sisterhood of warriors, known as The Coda, on earth. She fought with them for many years, even leading the group for a while. However, an incident occurred in Troy (presumably during the Trojan War), causing her to be branded a traitor and expelled from the order. She arranged for the Coda to help the Greeks conquer Troy in exchange for 99 female babies to be raised as new coda. She helped Ulysses conceive of the trojan horse and stationed Coda warriors inside it. During the fighting she decided that the killing of all of the unarmed women and children of Troy was going too far, so she saved the life of the royal family"~wikipedia
Zealot was obviously created from the same ink well as the "warrior" version of Wonderwoman. They've done a good job of making her unique while staying close to the template.  She'd fit right in.

The Wildstorm integration could be used to breathe new life into characters.  Some of which never really reached amazing heights of popularity but might if given a shake up and a new station.

UNION is drafted into the Green Lantern Corp.
"Ohmen was a member of a faction, called the Protectorate, on his home world of Aegena. The world was mired in a long civil war, as the Protectorate fought against another faction, the Directorate, for control of the planet. The members of both factions had special "stones" (in reality, a symbiotic organism) embedded in their chests. The stones imbued them with a variety of powers, including super strength, flight, energy manipulation and a staff composed of pure energy."~wikipedia
With a costume redesign, his experience with the JUSTICE STONE of the PROTECTORATE would make him a natural with a ring.

In my opinion the best way to ensure that the Wildstorm characters successfully integrate into the DCU is to immediately bring Wildstorm villains in and put them through the ringer.  Begin having the DCU heroes battle them and this will bridge the gap between the two universes.

Helspont battles both the Green Lantern Corp and the Justice League in a year long theme within DC.
"He may not look like it, but Helspont is a Daemonite, a race of aliens harvested to serve the Kherubim. The Daemonites rebelled and the Kherubim/Daemonite war began. Helspont became a military commander sometime during this war and was stationed on the Daemonite ship that crashed on Earth thousands of years ago. He, along with the two other highest ranked surviving Daemonites, took the title High Lord and became a leader to the other Daemonites. Helspont controlled most of the Daemonites but the other High Lords (Defile & Hightower) became his enemies, each with their own plan to either take over or destroy Earth. Sometime during his time on Earth, Helspont somehow managed to get a hold of an Acurian body, and since all Daemonites are capable of possessing other beings, he stole it. The exact circumstances for his acquisition of the alien host are unknown, but according to Spartan, it happened some centuries after the fall of the Roman empire."~wikipedia
As Helspont's back story begins to unfold, so too can the back story of the Wildstorm characters as they make minor appearances at first.

Here's hoping that we do see plenty of Wildstorm characters in the DCU very soon.

Zealot in Wonder Woman would be an awesome idea!

I think DC would be hesitant to fold in another universe into the DCU right now. The Milestone and Red Circle integrations doesn't seem to be a big hit for them.

@Reno
I was thinking of something MUCH MUCH subtler than those two. THE RED CIRCLE was it's own imprint practically and the MILESTONE relaunch was a huge event in the JLA & TITANS that never really took off.

Instead I was thinking more like just depositing some of the WILDSTORM characters into the DCU as supporting characters for now.

If done right, and over time, it could work.

Earth-50 is the Wildstorm Universe. They could easily continue the stories with no interruption.