"Beginning January 2011, DC Comics will implement a line-wide pricing adjustment, lowering the prices of all standard length 32-page ongoing comic book titles currently priced at $3.99 to $2.99, it was announced today by DC Comics Co-Publishers Jim Lee and Dan DiDio."
“Today’s announcement re-affirms DC Comics’ commitment to both our core fans and to comic book store retailers,” said Jim Lee, DC Comics Co-Publisher. “For the long term health of the industry, we are willing to take a financial risk so that readers who love our medium do not abandon the art form.” ~DC Comics
I shouldn't be sad about this, I know I shouldn't, but I am.  Here are some positive (probable) effects that are pretty easy to come to after learning of the price drop:

In addition to the after effects mentioned above it seems likely to this blogger that the price drop could benefit digital comics as well.  Lets examine this:

If at $3.99 BATMAN sells 50K copies that equals 19,9500.00
Multiple teams of employees: creators, advertisement, publishing are being paid to work on the book.

If at $2.99 BATMAN sells 50K copies that equals 14,9500.00
The same teams of employees are still being paid to work on the book.  That would mean DC is taking a cut in profits from the price drop (you could argue that the recently announced re-org may cancel this profit loss out all together but that still remains to be seen - the cost of making a comic is still fairly fixed for DC I'm sure).

DC is hoping this price drop will actually increase it's profit through an increase in sales.

How does DC intend to obtain a larger fan base to buy their cheaper comics?

Their movies?  That hasn't been working so far.  That business model will need an overhaul.  I think it's working the wrong way right now, comic fans are seeing/buying the movie.  DC needs to flip that and get the movies to draw in new fans.

Their new MMO?  We'll see, it just might at that.

Digital comics? Maybe, the Zuda comics look amazing on the iPad because they were formulated for the computer screen instead of the printed page.  There are those out there who are really into digital comics and even if the Zuda operation has shut down DC knows there is an on line fan base who will try out new books.

Speaking of "formulated for the computer screen" what about all of the design/conceptual work we've seen from the DC MMO?  If you were DC Comics why would you not utilize all of the digital media used to create the MMO in a digital comics project?

You know we'll see MMO art work on t-shirts, lunch boxes, and pee-chee folders so why not comics?

Why not do something unique and allow a player to "sell" a digital comic based on screen captures of their character's game play.  The "money" made could only be spent back inside the MMO.  You could fill each comic with MMO advertisements.

So why am I still so sad?

Dick Grayson isn't going to go back to being Nightwing any time soon.  :( 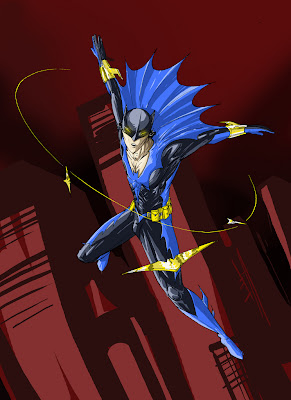 Ha! You got me with that last line!