In the comments of last weeks Collected Comics Wishlist, regular commenter BrittReid said he would like to see a collection of the excellent, but short run THUNDER Agents comics put out by David Singer and Deluxe Comics back in 1985. Here's my idea of what such a collection would look like (if DC were chosen to publish the series, which seems as good a choice as any since they published the THUNDER Agent archives.) 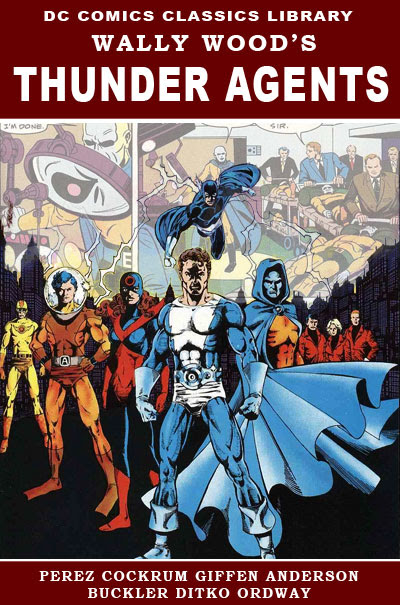 This is a good choice for a collected edition, as these comics had a veritable who's who of creators working on them. From wikipeidia...

In 1984, David M. Singer's Deluxe Comics began publishing a new series, Wally Wood's T.H.U.N.D.E.R. Agents, featuring some of the best artists of the era, including George Pérez, Dave Cockrum, Keith Giffen, Murphy Anderson, Steve Ditko, Rich Buckler, and Jerry Ordway. Singer claimed the group was in the public domain. A lawsuit by [John ] Carbonaro claimed otherwise. The lawsuit was eventually decided in US District Court in favor of Carbonaro, with Singer acknowledging Carbonaro’s registered copyrights and trademark. Under the decision, Carbonaro also received, among other things, an assignment of all rights to “Wally Woods T.H.U.N.D.E.R. Agents,” previously published by Singer, and an undisclosed sum of money. Deluxe Comics closed its doors in 1986, when several major distributors failed to pay sizeable past-due invoices

While on wikipedia, I saw this bit of harrowing news...

At the 2009 San Diego Comic-Con, DC announced that T.H.U.N.D.E.R. Agents will be brought into the DC Universe, as they have recently done with the Milestone Media and MLJ Comics heroes.

Considering what royal cluster both of those two *mergers* were, I hope DC has decided against this idea.

Anyway, while the fate of the THUNDER Agents is in doubt these days, for today's Free Comics Monday, I present two comics featuring another agent from Tower heroes - The Undersea Agents!

Say it ain't so! The best I could accept is that it's gonna be one of the multiple earths, but not in the main DCU earth.

Does DC now hold the rights to these characters? Or is it like their deal with Archie comics for the MLJ characters?

There's an interesting explanation about the Singer/Carbonaro lawsuit at http://www.comicsbulletin.com/forum/showthread.php?t=6548
The judge decided that the original THUNDER Agents were, in fact PD.
Carbonaro appealed the decision, and threatened to sue all the existing comics distributors if they carried the book!
The distributors, wanting to avoid costly litigation which wouldn't pay off even if they won, since Carbonaro was using a Volunteer Lawyers for the Arts-assigned team, dropped Deluxe Comics until the suit could be settled!
(The VLA assists creatives who can't afford legal services. They're "Legal Aid" for the arts.)
Without income from the distributors, Singer couldn't afford lawyers.
That's why Singer settled.
So, as it stands, the last ACTUAL legal decision proclaimed the Tower characters Public Domain!
(This is backed up by a news feature in The Comics Journal around issue #105 or so. My copies are in storage, so I can't dig them up for now. If anyone else can...)
According to http://pdsh.wikia.com/wiki/T.H.U.N.D.E.R._Agents the original Tower run is, in fact PD, so like all the characters in Project SuperPowers and Next Issue Project, only the new versions from Deluxe, JC, (as are the new, heavily-revised, DC versions) etc are copyrighted.

@Reno - hopefully, the fact that we haven't heard much about DC using the characters since that first announcement may mean they have decided against that plan. (Lord knows that if they looked at the sales of Mighty Crusaders, they should think again about repeating that mistake.)

@BrittReid - awesome link, thank you! That's just further proof that Copyright Law is just an oxymoron. So many times it comes down to which company has the most money and lawyers.

@BrittReid - All this time I thought John Carbonaro still had the rights to these characters.

Thanks for the heads up Reno! I've fixed the link now. I had an extra word in the link!