So in keeping with the Halloween, classic monsters theme I seem to have started with Monday's post, today I will present another collection I would love to see from DC - a nice omnibus of the entire I...Vampire run which appeared in House of Mystery from 1980 to 1981. 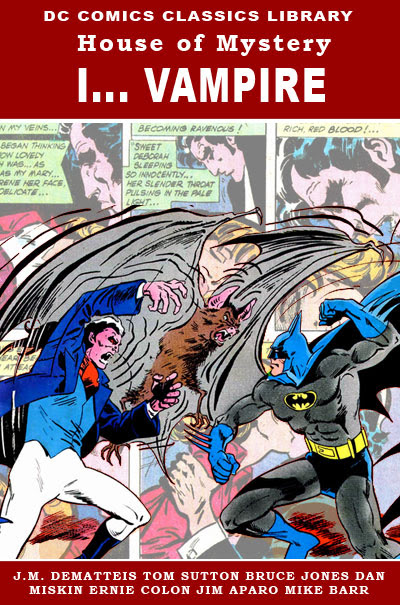 For those of you unfamiliar with the series, it was originally started as a continuing backup in House of Mystery by J.M. DeMatteis and Tom Sutton.

The series became popular enough to move from a backup to the frontrunner and quickly become the cover feature of House of Mystery (not a hard feat actually as the 80's wasn't a good decaded for random Horror comics.)

There were 24 issues and one Brave and The Bold story which is where I was introduced to the character. After seeing Lord Bennett in BatB, I was able to hunt down a lot of the old House of Mystery stories at Heroes Aren't Hard To Find, in Charlotte (though I was never able to track down all the issues.) 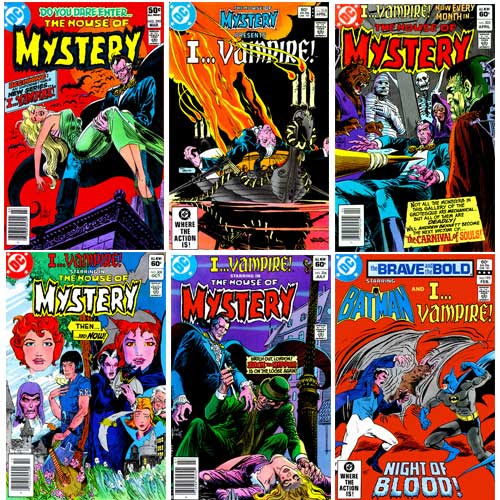 In addition to DeMatteis and Sutton, a few other creators of note on the series were Ernie Colon, Dan Miskin and Bruce Jones. (Jones in particular made a very good showing in the 80's on this series. Not sure what happened to him as his stories of late have sort of failed to connect with today's readers.)

I don't know that we will really ever see such a collection as I suspect the series may have been created during the time when comic companies were tweaking their work for hire contracts and reprint fees, so DC might be hesitant to do anything with the character. I think it was a similar issue that saw a Showcase collection of the old Secret Society of Supervillains killed. Still in this age of True Blood and Twilight mania, I think it would be worth whatever trouble it would take to see this excellent series collected!

I'd settle for a B&W Showcase collection of this series. Also, Night Force with Gene Colan art.

I have a few of the House of Mystery issues that has the I...Vampire stories and love them. Andrew Bennett teams up with Batman and Robin in this year's DC Universe Halloween Special #1.

@Reno - Yeah, Night Force *was* pretty awesome, wasn't it? I may make do a column on that series soon.

@Jamdin - Thank you for the heads up on the DC Halloween Special! I would never have checked that out otherwise!

An 'I... Vampire' collection is something I would love to see as well. There are so many series that could use that sort of treatment, but I'd put this at the top of the list for me.

I am sure all of us are very happy to see these new series here and i will try my best to get them soon even i am busy with my personal custom writers. We know that batman is one of the most interesting cartoon series so people will like this series also.