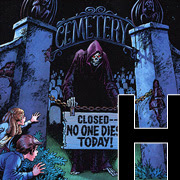 H is for horror hosts: Horror anthology comics having equally horrorific hosts is a tradition going back to 1950s EC comics' three so-called "GhouLunatics." The Comics Code had no room for horror framed by snarky comments and bad puns, so the hosts were out of work, except in TV tie-ins like the Twilight Zone, or non-Code approved magazines like Warren's Eerie and Creepy. But the Code loosened in the Bronze Age, and Cain became the "able [heh] care taker" of the House of Mystery in #175 (1968). The object of his fatricidal rage, Abel, moved into The House of Secrets in 1969. DC gave the (grave)moldering host-concept a makeover with the Mad Mod Witch in The Unexpected #108 (August 1968). Macbeth's Three Witches doubled toil and trouble at The Witching Hour (1969-1978). 1969 also saw the debut of Marvel's only hosted horror title, Tower of Shadows, which had not one, but two cemetery-themed emcees--Digger and Gravely P. Headstone.

The crypt doors were flung wide open in the seventies. Eve (a relative of Cain and Abel) weaved nightmares for realtors in Secrets of Sinister House (1972-1974) starting with #6, while Destiny preferred to dwell on Secrets of Haunted House (1975-1982). Destiny also spun Weird Mystery Tales (1972-1975) but entrusted those to Eve after #15. Lucien told Tales of Ghost Castle in 1975, but ran out of material after just 3 issues. The titillatingly titled The Dark Mansion of Forbidden Love (1971), switched to the somewhat less suggestive Forbidden Tales of the Dark Mansion after four issues, and got a sultry (and nameless) hostess who James Robinson would later dub Charity, but who looked a lot like Madame Xanadu--who was the host/star of Doorway to Nightmare starting in 1978. You might think the oddest horror anthology would be Archie Comics' Chilling Adventures in Sorcery as Told by Sabrina, where beginning in 1972, the normally wholesome teen-witch got to show her dark side, but no...The most way-out, weird anthology was hosted by one Farmer Bones, the bucolic, skeletal purveyor of animal-themed, terror tales in The Barn of Fear (1977). 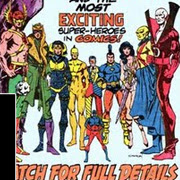 I is for Implosion: Remember the awesome 70s Vixen series? How about that Green Team on-going? Well, what about Grell's DC series, Starslayer? No? That's because in this universe, they never happened. In the Bronze Age, DC and Marvel waged a war for dominance of the shrinking comics market. In 1975, they both seemed to have arrived at a plan of throwing as many concepts out as possible and seeing what stuck. Between 1975 and 1978, DC and Marvel brought out 100 new titles. DC published 57 of these in what house ads trumpeted as "The DC Explosion." The market didn't--or couldn't--respond in the way DC hoped. Titles were axed, and in late 1978 there was a four-color holocaust--31 titles were sent to comic book oblivion in that year alone. Claw was conquered, Firestorm extinguished, and the Doorway to Nightmare shut. No one welcomed Kotter back. This massacre became known as the DC Implosion. In many ways, this loss of wild creativity and innovation was the real crisis that ended the DC Bronze Age. 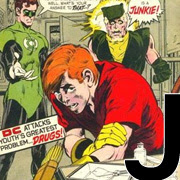 J is for Junkie: In 1971, Stan Lee took on the Comic Code Authority to publish a story showing the negative effects of drug use. Amazing Spider-Man #96 (sporting the lurid cover blurb "The Last Fatal Trip!") had Harry Osborne act out an LSD cliché, but it led to a change in the Comics Code. The door was open for the Bronze Age to show the sensationalistic horrors of addiction. The unfortunately named Speedy became a heroin addict (and a rock musician) in a socially relevant story arc in Green Lantern #85-88 (1971). In a 1979 Iron Man story arc, cocktail-swilling Tony Stark battled his own "Demon in a Bottle." Addiction could also provide costumed motivation, like in the case of the Black Spider, former small-time crook and heroin addict, who waged a murderous war on the narcotics trade, before running afoul of Batman in Detective Comics #463 (1976). Late Bronze-Agers Cloak and Dagger weren't addicts, true, but they did get their powers through being unwilling guinea pigs in a nefarious plot to perfect synthetic heroin. Sorry, Mr. O'Neil: maybe the snowbird does fly--at least in the Bronze Age. 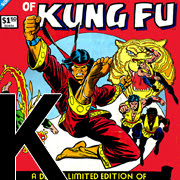 K is for Kung Fu: In the early seventies, everybody was kung-fu fighting as eastern martial arts mania caught pop culture in its grip. In 1973, the one-two punch of Bruce Lee's Enter the Dragon, and the Kung Fu TV series, got Marvel in the fray with Shang-Chi, Master of Kung Fu, debuting in Marvel Special Edition #15. The character was such a hit that the title was rechristened The Hands of Shang-Chi: Master of Kung Fu with #17 in 1974. That year the dojo got crowded with Marvel's Iron Fist, and the Sons of the Tiger, both of whom would make appearances in the black and white magazine Deadly Hands of Kung Fu. Jim Dennis (a combined pseudonym for Denny O'Neil and Jim Berry) produced a kung fu novel in '74, titled Dragon Fists--which served as a "backdoor pilot" for DC's entry into the arena with Richard Dragon, Kung Fu Fighter (1975). That same year, Charlton invited fans to the House of Yang, which was a spin-off of their "don't call it Kung Fu: the Comic" 1973 series Yang. DC emphasized the "karate" in the name of the some-time Legionnaire, Karate Kid in his high-kicking solo-series starting in1976. By the end of the seventies, virtually all of those characters were in limbo, "superherofied", or settled into mentor/trainer roles. Exit the Dragon. 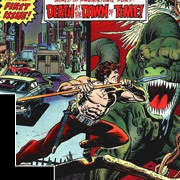 L is for Lost Worlds: Let's get our terminology straight. We're not talking about otherworldly fantasylands (like Gemworld), forgotten prehistories (like Conan's Hyborian Age, or mythological realms (like Asgard). Instead we're looking at the Bronze Age echoes of Arthur Conan Doyle's Maple White Land, the titular Lost World.

The foremost example is technically pre-Bronze Age--the Savage Land from X-Men #10 (1965). Still, with 3 self-titled Ka-Zar series, Savage Tales, and Astonishing Tales sprawling across the seventies and early eighties, this prehistoric preserve in Antarctica is definitely Bronze Age real estate. Another Silver Age revival was the tropical island hell of The War that Time Forgot which flared up in GI Combat in 1976 and Weird War Tales in the early eighties. In First Issue Special #8 (1975), DC bade us for the first time "enter the lost world" of Skartaris on the earth's interior with Travis Morgan, the Warlord. The South American jungles hid both a city of diminutive aliens in 1983's Sword of the Atom, and Nova Roma, the remnant of a lost Roman colony, in New Mutants vol. 1 #8. But not all lost worlds were in far-flung parts of the globe. The Wild Area, from Kirby's Jimmy Olsen, with its motorcycle gang Hairies, its Habitat "hewn from the giant trees," and its Mountain of Judgment, was apparently a bedroom community of Metropolis.
Posted by Jim Shelley at 6:20 AM

Yay! I'm glad the Bronze Age Alphabet is back. (Posted before I've even read this installment, but I'll be back in a couple of hours ... .)

This is one of my absolute fave features on this blog!