Today, I present another one of Pierre's versions of a Classic Golden Age character - this time it's The Human Bomb, from Police Comics. 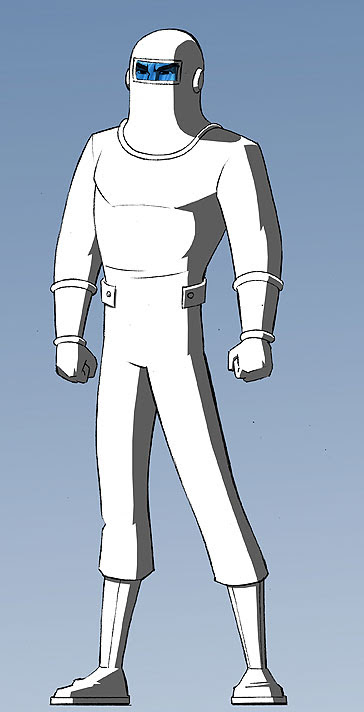 Roy Lincoln, aka The Human Bomb, was originally a scientist working with his father on a special explosive chemical called "27-QRX." However, when Nazi spies invaded his lab and killed his father, he resorted to ingesting the chemical to prevent it from falling into their hands. As a result, Lincoln gained the ability to cause explosions in any object he came into contact with, particularly through his hands; the only way to control it was to always wear special asbestos gloves (which were subsequently retconned into "fibro-wax" gloves after the human health hazards of asbestos were discovered).

Donning a containment suit to prevent any accidental explosions, Lincoln became the "Human Bomb," removing his gloves only to expose his explosive powers against Nazi and Japanese enemies, as well as ordinary criminals. He later gained enough control over his powers to be able to remove the containment suit, though the gloves were always necessary.

The Human Bomb appeared as regular feature in Police Comics.

A Human Bomb feature continued in Police Comics through issue 58, published in September, 1946. During that run, he was given a comic relief sidekick named "Hustace Throckmorton," who acquired a power like the Human Bomb's (though instead centered in his feet) after receiving an emergency blood transfusion from the superhero. Throckmorton was then briefly replaced by three youngsters who were collectively called "the Bombardiers."


Have a great day!