Great minds don't always think alike, sometimes they can think nearly opposite of one another.

Look at video in the mid to late 70's. When it was decided to market video for home viewing, two formats sprung up in the public market place. Both released very close to one another: VHS [1976] & BETA [1975].


We all know what happened and if you so desire you can read more about its history here .


In the music industry, particularly since the development of .mp3's there have been duels of "Digital Rights" that continue today, even into the superior courts.

The most recent "Format Duel" to my mind would reside with video again, that being between HD DVD and BLUERAY. I don't know if there's been a clear winner declared quite yet [but don't sell your stock in BLUERAY].

I believe that the next big "Format Duel" that we'll see explode all over the internet has all ready begun...with comics.


Now, we all know that there is an element of traditional "Comic Collecting/Reading" that can't be duplicated quite as well [at least not in the foreseable future] with fully digital comics read on a device.

Some of those more traditional "perks" if you will would be having a passionate live conversation with other passionate individuals in a comic book store. Getting the opinion of the Comic Shop owner or their employee of a book before you pick one up. You can ask them what they think and what other consumers have thought, commented on, and ultimately purchased. I've read, in the past comments of this very blog I believe, that the commenter wouldn't want to take a cold machine into the bathroom with them over a paper comic book.

We haven't even touched on the topic of collectability of fully digital comics sold/consumed on a hand held device [and were not going too].


The fact is, comic book fans are split, some won't quit buying paper comic books until the last one is printed, shipped, and placed on a comic shop shelf for the last time. Truthfully, I don't see that happening in our lifetimes. Since no one really comments on this blog anyway, I don't have to worry about catering to that group of comic book fans.

For the rest of us, we have a "Digital Comic Book Format Duel" in our near future.

It was announced recently on JOYSTIQ and then NEWSARAMA "That Sony Computer Entertainment Europe is testing the waters on a major new addition to their online store: a dedicated section for Comics." the article goes on to talk about "A panel by panel system, similar to how many comics have been presented on the iPhone already, which gives an easier way for readers to view the comic on such a small screen."

Check out this video presentation...

And for those of you who don't own a PSP, there are several different iPhone/iPod Touch apps to read/view comics on those devices. We've covered some here and here on this blog in the past. A new one to us is PULL LISTS.

There are other formats, and there will still be more formats to come. Is any one format thats been demonstrated to the public a perfect solution? Has MARVEL, DC, DARKHORSE, or IMAGE endorsed any one format? The answer to all of these are a resounding: NOT YET.

Is there one format that will work on all "smart" devices with a big enough screen?

After years of teasing -- FLEPia was first announced in April of 2007, and first proven in 2006 -- Fujitsu has at last released its color e-book (or e-paper mobile terminal, as they'd like you to call it) to the masses. Featuring an 8-inch XGA screen capable of displaying 260,000 colors, along with Bluetooth, WiFi and up to 4GB of storage via SD card, and measuring less than half an inch thick, FLEPia's not just getting by on color alone.

Fujitsu promises 40 hours of continuos use, and the unit can be operated by its touchscreen or the assortment of function buttons. Naturally you can do the regular e-book thing, but the Japanese version of the device also includes full-on Windows CE 5.0, which would probably be a bit of a chore to use with the relatively slow screen refresh times of e-ink (1.8 seconds for a single wipe), but undeniably retrofuturistic. FLEPia ships on April 20th in Japan for 99,750 Yen (about $1,010 US). ~Engadget

The iTablet rumors continue to gain momentum as more and more details of some form of touchscreen netbook or tablet device leak out of the many various vendors Apple is using for whatever their next, gotta have it device may be.

This of course is resulting in quite a number of beautifully rendered models of such a device. Like this... 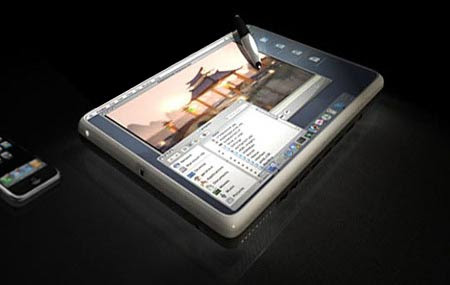 The iTablet, based on a rendering posted at TechEBlog.

The iTablet will likely follow the evolving design themes emerging from Cupertino, continuing the convergence toward aluminum and black that characterize recent Apple machines. The critical acclaim and hotcakes-like acceptance of the MacBook Air guarantees that slimness and lightness will be a priority, and by their omission, optical drives will be given another small push toward obsolescence. ~THE READER

Those are just a hand full of devices and formats that will be dueling for digital comics supremacy as paper comics die. I'm sure were in for lots more to come, particularly if the SXSW #ComicsonHandheld panel was any indication....

The SXSW INTERACTIVE FESTIVAL celebrates the creativity and passion behind the coolest new media technologies. In addition to panel sessions that cover everything from web design to
bootstrapping to social networks, attendees make new business connections at the three-day Trade Show & Exhibition.

The newest element of the event is ScreenBurn at SXSW, which adds specific gaming industry programming as well as a three-day Arcade to the mix, as well as a panel titled #ComicsonHandhelds. I couldn't be there unfortunately. Even more unfortunate than that was the condition of the old standby in this type of situation: twitter.com which didn't seem to handle all of the extra traffic using it during the conference [in my opinion].

I did check in from time to time to test twitter and what I could find about the panel and here are some snippets or tweets that I was able to pick up...

4. Dave of Clan Bortdeadbug I stand firmly behind the facts that I made up during the #comicsonhandhelds panel. #sxsw4:23 PM Mar 17th from twidroid

5. AdriAdriAny panelists have websites for mobile browsers? uClick does (gocomics.com), @rstevens said he looked into it, but hasnt #comicsonhandhelds4:07 PM Mar 17th from web


6. AdriAdri@csven probably should have said the handheld market. No platform was specified, but all panelist recs were on iphone. #comicsonhandhelds4:04 PM Mar 17th from web

7. AdriAdriPeople are starting to create workds to go seamlessly from web to mobile to print (lanscape mode again)

12. Pete AshtonpeteashtonAsked my first question at a #SXSW panel, about whether GPS, etc would affect #comicsonhandhelds or not.3:55 PM Mar 17th from twhirl

15. rosscottrosscottHmm. If you could hide the words from the art they could overlap more and be more readable. #comicsonhandhelds3:51 PM Mar 17th from Tweetie

16. AdriAdri@csven I think it might have to do with publishing rights more than stylistic issues. Old media paradigm. #comicsonhandhelds3:49 PM Mar 17th from web

17. rosscottrosscottOoh I'd love to see sketches superimposed on finals as a feature #comicsonhandhelds and audio commentary.3:48 PM Mar 17th from Tweetie

18. Laura P ThomasLPTRT @kimhaynes: OMy! What happens to your digital life if you believe in reincarnation?! This session could last for hours! #SXSW-Die #SXSW3:37 PM Mar 17th from TweetDeck

21. AdriAdriPanelists hope that micropayments for comics will work on the mobile platform better than on the web. #comicsonhandhelds3:31 PM Mar 17th from web

22. AdriAdriChallenges of the medium include reformatting traditional or web comics. Ideally comics will be designed for mobile. #comicsonhandhelds3:31 PM Mar 17th from web

23. rosscottrosscott@jaydeflix wow that's not twitter frriendly.turns out you can ask yourself thru #comicsonhandhelds if they use it I'll let you know.3:03 PM Mar 17th from Tweetie

Caine
Posted by Jim Shelley at 6:53 AM

Well, I don't know that comics will be the next big format duel, but it's definitely an issue that's already out there. Personally, I think one of the keys will actually be on the combination of color/clarity, price, portability and screen size.

Currently, I can, and regularly do, read comics on my PDA. (And, yes, I've even pulled read them in the bathroom.) It requires some work-arounds currently -- PDFs don't always load well, and I need to decompress CBRs and read them as individual JPGs -- but it's certainly functional and gives me a greater degree of flexibility than pamphlet books. However, those work-arounds are beyond what most folks would consider tolerable.

I can easily see people reading comics on a tablet-type device, but it A) needs color -- the Kindle won't cut it here, B) needs to be cheap enough to offset the price of buying a decent number of pamphlet comics -- I figure $100-$150 max, C) must be as conveniently portable as a pamphlet comic, and D) needs a large enough screen that you can read more than one panel at a time. They're all important points, but the last one is largely under-recognized. I think any option where a user can only read one panel at a time is inherently too frustrating from a time-spent-between-scrolling-actions point of view. Even the most copy-heavy panels take a moment or two to read before a user would need to scroll/click/slide on to the next panel, meaning they'd have to spend as much time navigating the document as they do reading it. That's the killer for anything done on the PSP or iPhone or whatever. Movies are okay because you hit "play" and let it run. But unless you're running a literally constant interaction with the display unit (as in a video game) the navigate/read/navigate/read is going to prevent current system from being really effective. Users won't latch on until you can navigate/read/read/read/read/navigate/read/read/read/read.

Sean, man, that comment was so interesting and indepth that it almost should have been a PCDW Guest Column! :)
-----------
Yeah, I think you've hit on the landmine that no one has discovered yet (or if they have, they don't seem to be talking about it) and that's that the 1 panel per screen iPhone format has serious drawbacks as a entertainment experience. I have read quite a number of comics on my iPod touch (Atomic Robo and Chance of a Lifetime being my favorites so far) and as you say, you spend so much of your time having to interact with the pages/comic that it removes you from the reading experience.
-----
I'm really sort of hoping Apple will announce an iTable with full comic page reading ability in the 4th quarter and save us all a lot of trouble.
----
As to your comment about price for such a gadget - I think when you figure that the average comic fan buys anywhere from 4 to 5 comics a week, and that runs $16 to $20 then it doesn't take long to see how even a $500 device could pay for itself in a year if comics on such a device remained $1 a pop. :)