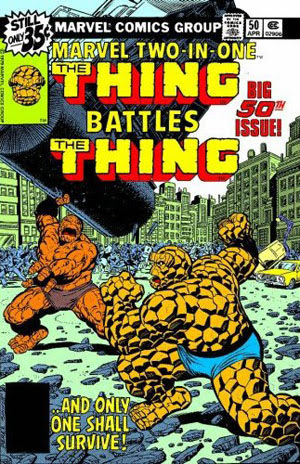 Know, O Reader, that between the years when the rocket-ship gleam of the Silver Age tarnished, and the years of the rise of iron-girt modernity with its grittiness and situations so adult, there existed an Age of Bronze…

Because no one demanded it, in this installment of Bronze Age Spotlight, we’ll turn our analysis to defining the elements and innovations of that bygone era. A topic of such importance demanded not one, but two pundits to opine. So for the first time in the Spotlight, Jim Shelley, Flashback overmind and editor-in-chief, joins forces with me in one epic column.

Follow us back now, to a time—scant months ago, wherein Jim and I first began to wrestle with the eternal question: Just what is the deal with the Bronze Age?

Part 1: The Argument is Posed

October 21 2008. In the subterranean fastness of the Flashback Bunker, Jim Shelley types furiously, the satisified “clak-clak” of his vintage keyboard mixing with Iron Maiden played at a low, but incessant volume. What he types is this:

This morning I was thinking about Deadman [ This is not, in and of itself, unusual, as Jim is forever thinking of Deadman] and whether or not I thought that series/arc reflected any of the traits I think define a Bronze age comic. I've never tried to specifically distinguish between Silver age and Bronze Age before, (always relying on my own gut feelings) so I found the exercise sort of interesting... Here's what I came up with...

Think I'm missing anything or wrong about any of these?

Then Jim leans back in his egg-chair, tents his fingers, and waits. For reasons now obscure, he will have to wait until 7:58 AM the following morning for my reply:

I think that's about right. 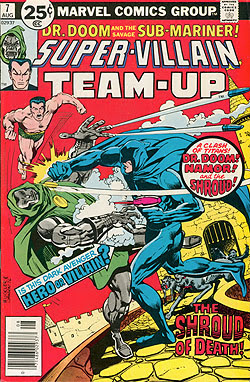 I don't think the ideology is so much 70s counter-culture though, as it’s 60s ideology filtered through the 70s disappointment that the 60s had failed. Sixties ideas of equality took a while to get into comics, but when they did they jumped immediately to 70s conceptions thereof.

While there are more anti-heroes in the Bronze Age, I think the number is still fairly small (though I suppose it depends on exactly how you define anti-hero). Dracula, Satana, and Jonah Hex are the anti-heroes I can think of. Compared to standard superhero comics, the Punisher might be called one, but I think he's actually a hero, just not one of the standard comic book variety. I suppose comics with a villain as the star (The Joker, Super-villain Team-Up, Secret Society of Super-Villains) might qualify.

Now Jim has hooked me…as he knew he would. Having laid that groundwork now was the time to advance my own theories:

This is how I would define the Bronze Age:

3) Concern with social relevance (race issues, drug issues, environmentalism)--and a recognition that superheroic violence is not a viable solution to when problems, and sometimes may worsen them;

5) More common use of a sardonic or tongue-in-cheek tone (though not camp mostly);

7) Fewer "pat" endings and a move to more ambiguity;

And then there are all those superheroes suddenly deciding to sleep in the nude… Seriously, what was that about?

Jim takes all of this in. It crawls through the labyrinthine recesses of his mind. One solitary point emerges from those unknowable depths, and he replies at 10:25 AM :

Good point about the nudes! :D

So there you have it, gentle reader. It turns out the Bronze Age was about superhero nudity. All that other stuff was just filler, window-dressing, white noise. Sleeping Naked.

[ I’d like to point out that Deathlok never once slept in the nude, and Woodgod was, in fact, always nude. – Jim ]
Posted by Jim Shelley at 6:29 AM

What got me about the bronze age (besides the nudes of course)was less of a reliance on costumed heroes in the characters that were introduced during this time. Sure you have costumes, but the whole superhero meets super villain stories [they fight blah blah] took a back seat. The comics code taking their hands off the creators pens was also a big help in allowing creators to bring in all kinds of story elements that were banned. Horror stories and sleeping in the nude being the two most obvious examples of this.
*************
Write more bronze age spotlights I'll read more bronze age spotlights -promise. :)

Thanks. It's good to know somebodies reading them.

We're on an "every other week" schedule with BAS--that's about the best I can do between working and writing other stuff (like hell-bent).

Where was that nude image from? Was that an issue of "The Incredible Hulk"? Betty Ross is the only "Betty" I can think of...

Quickly thinking back, my favorite Bronze Age writer was Steve Englehart and a lot of his work featured the criteria you mentioned; his Starlord story in Marvel Premiere comes to mind as well as some of his work on The Avengers and Captain America. Of course, in "Super-Villain Team Up" he had the then-stunning scene of the FF being stopped from attacking Doctor Doom by none other than Henry Kissinger! If that wasn't a true smack in the head dose of reality...! So vivid, I still remember my stunned disbelief even today!

Sphinx - that image comes from Hulk 168 in which Betty Ross is transformed into the green gamma bolt throwing Harpy! --- And I think we'll try to cover the Super Villain Team Up here at some point too!