Revisiting the Wild Wild West: The Night of the Big Blast 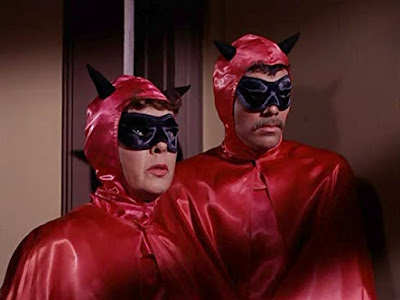 "The Night of the Big Blast"
Written by  Ken Kolb
Directed by Ralph Senensky
Synopsis: Mad scientist Dr. Faustina and her mute assistant, Miklos, create explosive human robots from corpses in a plot of revenge against the U.S. government. Artemus investigates on his own after the first walking time bomb appears to be Jim West!
Trey: This episode wound up being perfect for the week of Halloween viewing. We've got the cold open that is an obvious homage to Universal's Frankenstein and there are any number of costumes and masks thanks to the Mardi Gras setting.
Jim: Yeah, that intro really hits the right mad scientist vibe! The colored bulbs and spinning wheels are another good use of colored television technology.
I will admit to being a little disappointed to see that the "creature" in this instance is just another Jim West doppelgänger. I would have liked to see the show go all in on a Frankenstein's Monster vs Jim and Artemus episode.
Trey: Now that you mention that, I'm amazed the Gold Key Comic never had an issue like that!
Jim: This episode does give Martin more lines than normal, but  a lot of them aren't really pertinent to the episode. I think of the scenes between him and Lily. 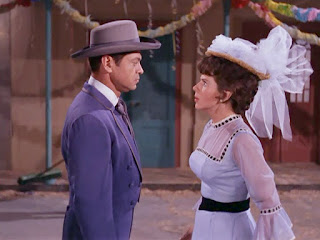 Trey: Well, I think Lily-Artemus interactions are to give him a love interest for once, but it is true she isn't much tied into the main plot. She might have been better used if she were sort of his co-investigator. Her acting skills could have come in hand.
Ken Kolb said that when he had a plot heavy episode, he liked to give Artemus the main lines because Martin was a better actor than Conrad. This time around, he gave him pretty much the whole show.
Jim: I felt like the appearance of West came a bit late in the episode, and it was done as if it was going to be a shocking reveal. I wonder if 60's era television viewers were actually shocked by it?
Trey: Perhaps more shocked the star was absent from so much of the episode.
Still, I think this is a decent episode. It has the same sort of pulpiness we've come to expect from Kolb after "The Night of the Burning Diamond" and "The Night of the Sudden Plague."
Jim: Overall, outside of the comedic scenes with Lily and her mother, I found the actual plot a bit vague and boring. Well, I did like the setpiece fight scene with Artemus vs the Three Musketeers! It was a nice change of pace.
Trey: Martin actually did some of his own fencing there, though all the longshots are of course, stuntmen.
Posted by Trey at 7:00 AM