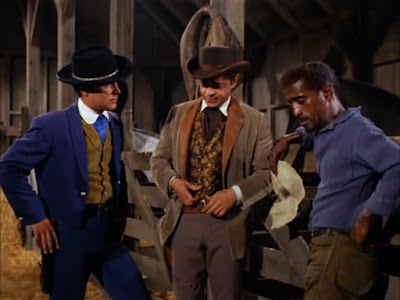 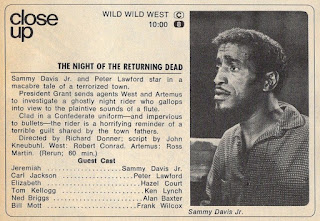 Trey: Sammy Davis, Jr. is given a much larger role than most guest stars, certainly most non-villain guest stars. I wonder if Kneubuhl was trying to create another recurring character?
Jim: They give Davis some nice dialogue to work with, which he takes ample advantage of to give a very compelling Jeremiah!
Fellow Rat Packer Peter Lawford also brings a low key, but powerful performance as Carl Jackson. Nice but of stunt casting by CBS.
Trey: Too bad they couldn't get Sinatra as the ring-leader of the villains.
Jim: This is my favorite episode of this season so far, mostly because of the acting, initial mystery, court scene and Jeremiah's psionic abilities. It also makes excellent use of the shows four act format with appropriate cliffhangers at act two and three.
Trey: I think I lean more toward "The Night of the Eccentrics" for pure entertainment value, but I agree this is a well put together episode.
One thing bugs me: Kneubuhl said he was trying to make some civil rights comment here. I can't really figure it out, possibly because the script is being circumspect as required for 60s TV, but possibly because it's just muddled. The murdered party being avenged was (by implication) a Confederate slaveholder. He had "servants" who died with him who may have Jeremiah's friends or families, but they barely get mentioned.
Davis does sing bits of "No More Auction Block for Me,"
Posted by Trey at 7:00 AM