Revisiting the Wild Wild West: The Night of the Golden Cobra 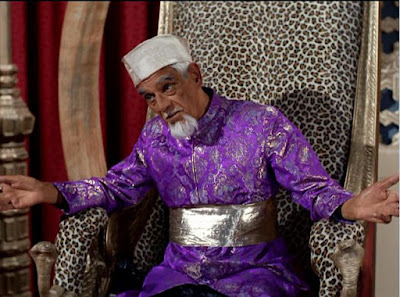 "The Night of the Golden Cobra"
Written by Henry Sharp
Directed by Irving Moore
Synopsis: The Indian Territory Commissioner recruits James West to investigate the strange occurrences at the reservation. West soon finds himself the unwilling guest an émigré maharajah who wants his sons to be tutored in the fine art of killing.

Trey: I feel like a line from Boris Karloff as Mr. Singh sums up my feelings about this episode: "I grow annoyed with this ridiculous ape."
Jim: That dancing ape is pretty ridiculous.
Trey: I think this is the weakest episodes we've seen so far. It's amusing in places, makes good use of color, and has decent action scenes, but I struggle to see what the point of it was other than the high concept of "Real Indians in the Indian Territory!" [cue laugh track]. And then there are bizarre things like the dancing gorilla. And of course there's all the Orientalism.
Jim: Oh yeah, this episode is easily the worst we've seen on a number of levels. The use of color and action scenes, like you mentioned were nice, but when I remember that there were critics who found "Night of the Eccentrics" off-putting, I gotta wonder what they thought when the dancing gorilla appeared?
Trey: It seems very campy.
Jim: Do you think Batman's success was having an effect? 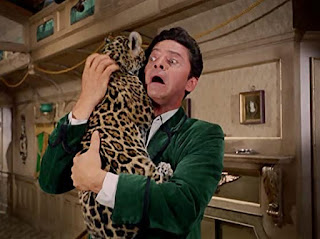 Trey: Well, Batman started in January 1966, and the two episodes we just watched aired in September of that year. I don't know their shooting schedule, but given that Batman was a success out of the gate (it's two nights each occupied slots in the Top 10 shows of the 65-66 season--and it wasn't even on that whole season) it certainly would have been the sort of thing people wanted to emulate.
Jim: Audrey Dalton as the Sultan’s daughter Veda is a real mismatch here. I would have much rather seen someone like Caroline Munro in this role.
Trey: Yeah, I guess we should be glad they didn't put her in brownface. Caroline Munro was a mere 17 at this point, but surely they at had some other darker-hued actress--maybe even, somehow, an actress of South Asian descent?
Jim: That's asking a lot in 1966 Hollywood, apparently. But hey, Boris Karloff is good here!
Trey: True.
Jim: The cane he uses is most likely to accommodate Karloff’s back problems. He apparently hurt his back wearing the harness in the Frankenstein movies and required multiple surgeries to alleviate pain over the years.
Trey: Kesler's book says everyone found him a joy to work with on set.
This episode was written by Henry Sharp who wrote the excellent "The Night of the Puppeteer" and the pretty good Bond riff (that you haven't watched recently, probably) "The Night of the Glowing Corpse," but he didn't do so well here.
Jim: I don't know if it's just the episodes we are watching, but man does this show lean hard on the "female helps West out" thing!
Trey: Well, that's pretty much all of them, I think. If we only watched the episodes where that didn't happen, we might be through with our rewatch by now!
Posted by Trey at 7:00 AM