Whatever Happened to the Age of Bronze? 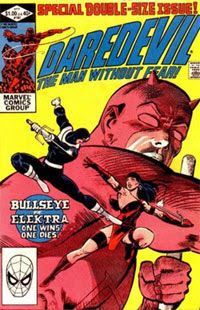 Theory 1: A Bit of the Old Ultra-Violence

The Bronze Age died by violence, which some might call fitting, since it had introduced the bloody-handed Conan, and the deaths head emblazoned Punisher to comics. It had it coming, some might say.

With the first Frank Miller scribed issue of Daredevil in 1981, the world was introduced to the doomed Elektra, Matt Murdock's old college flame. She was now an assassin working with the evil ninja cult, the Hand. In less than twenty issues, she'd be dead, felled by another assassin, Bullseye.

Frank Miller's seminal run not only gave us the initial Elektra saga, but also had the Punisher shoot Daredevil, and turned the Kingpin from a pudgy super-villain to a gritty, if larger than life, crime figure.

And during all this, people died. Violently.

This was to set the tone for the age to follow, where grim and gritty would be the order of the day. The difference between heroes and villains would often be the reasons why they killed rather than anything else. Miller brought this outlook to Batman in a dystopian future (or dystopian present, depending on how you read it) in The Dark Knight Returns (1986)--and once you saw Batman using a machine gun against gang-punks, there was no way you could think you were in the Bronze Age. 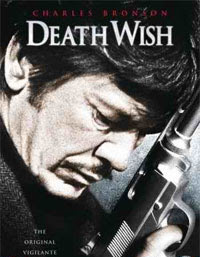 In many ways, Miller's dark, ninja noir, was just the fulfillment of the dark detective stories Denny O'Neil and Neal Adams were telling with Batman starting in the early seventies. Certainly, the rising "grittiness" of cinema through late sixties into the seventies played a role, with the rise of the Spaghetti and revisionist Westerns, and boundary-pushing, exploitation crime and action fair.

This would only continue as popular culture digested and regurgitated TV news images of street riots, and Vietnam. Comic book heroes born in the eighties and early nineties seemed as much the descendants of Charles Bronson's pacifist turned vigilante in Death Wish, Stallone's tormented vet in First Blood, or Schwarzenegger's emotionless killing-machine in Terminator, than of Silver Age Batman or Superman.

Oh Age of Bronze, I knew ye well! I watched you grow out of your awkward Silver Age soap opera adolescence into a mature forum for way out hippy fables. Scribes like Gerber, Starlin, Haney, O'Neil and Brunner took up pen and filled your pages with stories of counter culture idealism and psychedelic imagination.

The sweater-vested, buzz-cut Silver Age grew up and went to college and got into political action, racial awareness, longhair, and (shudder) psychedelics. Where before the Thing had fought the Hulk, now Man-Thing fought The Man. Stan and Jack had managed to attract some attention on college campuses by being new and different, and the Bronze Age writers were now taking advantage of this new audience to expand their storytelling horizons.

However, like all summer romances, eventually the bloom falls off the rose, and the romance fades. The times changed and the mind altering themes of the 70's began to look quaint in the era of Reaganomics and Punk Rock. The stories that were daring and socially relevant were now quaint and laughable. What did it matter if Green Lantern raised his awareness by road-tripping with Green Arrow, if we still got Reagan, Iran-Contra, and AIDS? Adam Warlock may have pried open his third eye, but you only needed two to see that promises had been made and not kept. A lot of creators--the Punks of the comics world--weren't gonna take it anymore. 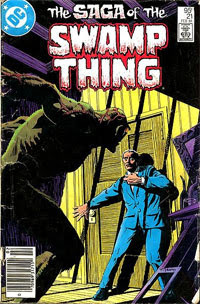 Enter Angry Young Men from across the pond who would grab the reins to expand on the adult themed stories the 70's writers had initiated. People like Alan Moore, Grant Morrison and Warren Ellis would bring new storytelling techniques to comics they had honed perhaps in the pages of 2000 AD. The first glimpse of this new wave was in Saga of the Swamp Thing #21.

There in the pages of "Anatomy Lesson," Alan Moore kicks off the Modern Age of comics with a tale that renews the Swamp Thing mythos (and comics in general) by deconstructing Swamp Thing's origin into a darker, more horrific, that nevertheless opened new vistas to explore. From there, the floodgates for innovation were opened as Morrison, Ellis and Moore would bring ultimately combine big action with big ideas and adult stories.

But it wasn't all progress. Sometimes the adult stories were just an excuse for mean-spiritedness; adult situations a gloss on crassness. Punk rock can be just as silly as prog rock when it comes down to it.

How often can you be told "everything you know is wrong, before you begin to think nothing's right? For every "Anatomy Lesson" or Animal Man, there was another comic cynically going through the motions.

And many decided not to move on at all. In fact, they retreated. Those writers who had been the champions of the socio-political stories either moved on for greener pastures or put aside their leftist leanings to tell more conventional/profitable tales. Instead of insidious governments, we now got Infinity Gauntlets.

Theory 3: I Won’t Have You Embarrass Me Like This!

From the wackiness of the post-Wertham era 50's to the Schwartz inspired silliness of the 60's comic continuity had collected a large amount of baggage over the decades. While Rainbow Batmen and Lion Headed Supermen were once all the rage, the late 60's saw the beginning of a move away from such zaniness as writers began to explore more serious stories with less emphasis on continuity. One example of this is the advent of the “New Look” Batman. This era of Batman was meant to be a return to the street crime fighting roots of the character, so it's a little ironic that he ended up inspiring the campy version that became so famous on television. Another move to break away from the old stories was the “Kryptonite No More” storyline in Superman #233. 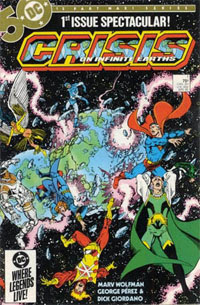 However, you can't really shake off the dust of twenty some years of random Kryptonian cousins, criminals and critters all arriving via rocketship with just one storyline. No, to do that requires something much bigger.

So, it's probably no surprise that DC's answer to the dissonance inspired by years of careless continuity was to simply wipe the slate clean with the multi-issue crossover Crisis on Infinite Earths. Like we were promised, worlds lived and worlds died. Superman wept on a cover, and it wasn't a hoax or a dream sequence. Wolfman and Perez played for keeps.

With CoIE, DC shut the door leading to a continuity where Batman's mentally-challenged brother and Beppo the Super-Monkey occupied the same world as Walt Simonson's Manhunter and Denny O'Neil's Ras-Al-Ghul.

Or did they? Turns out people like their Legion of Super-Pets, their Batman of Zurr-En-Arrh, and their Ma Hunckle Red Tornado. The door was flung wide again. The old stuff came creeping back, and the new age got just as cluttered as the old.

Theory 4: The Simple Things You See are All Complicated

What happened to the Bronze Age? Well...its complicated.. I mean, it got more complicated.

Maybe I should explain.

In the Silver Age, of course, most comic stories were "done in one" as they say. Two-parters were uncommon, and stories extended beyond that were rarer still. Background storylines were nonexistent. Like Barry Allen on his Cosmic Treadmill, heroes zoomed from one adventure to the next without really ever going anywhere or changing anything in their life. It was usually just a question of what villain would get in their way. In a way, the readers were the ones on a treadmill.

This began to change in the Bronze Age. Characters got more of a civilian life, and more of a supporting cast. And the adventures themselves got bigger--the word "epic" began getting thrown around a lot. Hyperbole perhaps, but The Kree-Skrull War in 1971-1972, and the Korvac Saga (1978), were sure more daring in scope than comic's readers were used to. 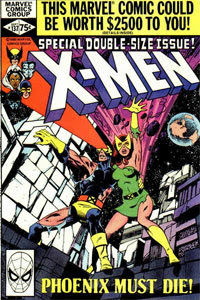 This trend probably reached its zenith with not one but two interconnected sagas in the X-Men. The Phoenix Saga (X-Men vol 1. 101-108) in 1976-77 gave Jean Grey cosmic power and lead to cosmic drama with The Dark Phoenix Saga (#129-138) in 1980. When it was over, an X-man was dead--and maybe so was the Bronze Age. Or at least, it was on life support. In any case angst and tragedy had been made a core ingredient of the X-men storytelling style, and would remain so for over a decade (and perhaps forever).

X-Men would emerge from near cancellation in the Bronze Age to being a hot property in the age to follow. Its storytelling style of long storylines, convoluted back-stories, and soap-operatic overtones would be copied by numerous titles and creators either entranced by its style--or trying to recapture its popularity.

So there you have it. The Bronze Age wrote "to be continued" one time too many, until one day....it wasn't.
Posted by Jim Shelley at 8:58 AM

Wow, what a great article! I agree so much with your ideas! This notion that the bronze age lasted into the 80's always seemed so absurd to me! Miller killed it with Electra, Claremont/Byrne with Phoenix, and Wolfman/Perez with Supergirl! I think the Bronze age died January 1978 with Jim Shooter's ascension to Editor-in-Chief, the DC Implosion, and the birth of the Independent market with Cerebus and Elfquest!
Such a great article! Thanks so much!