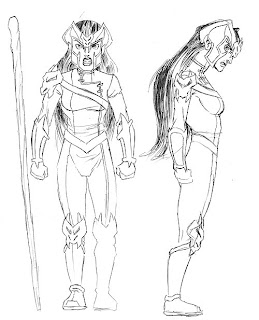 I mentioned how I had some time to make some comics between my animated projects.
At first I figured that it could be a nice opportunity to get my name into print while I was waiting for my next animated project.
Through various sites like Digital Webbing, I applied or was contacted to work on various projects.
One of those was a project called “First Ladies”.
Sadly it does not take much for a project to go down the drain.
At some point after making various designs and rough sketches for the first 11 pages, I was told that the writer left the publisher with his project.
So no project, no name into print, and no share on future profits. One of the reasons why working for a share of future profits = working for free. But that will be the subject of a future Blog.
But I was asked to work on another project instead which will be the subject of my next Blog.
But here are some of the designs, a rough idea for the cover and a mock-up cover, and some rough sketches for some pages.
"Colony"

One of the things that I have learned through the years is that most people cannot “read”/understand a rough sketch. So I made some fairly “clean” drawings for the designs just in case.
Although after a while, once you make sure that the people you are collaborating with understand what you are doing… then you can try to show them some rougher sketches.
For example, when I started collaborating with Jim, not knowing what he was expecting, I was sending him some pretty finished drawings/designs at first. But once I was sure that Jim understood what I was doing and that he knew how the finished artwork could look like, then I could send him some rough sketches instead.
Why is it important??
Time is precious.
Making a rough sketch can save you some time as opposed to making a finished drawing.
If you spend 3 hours making a finished/fully rendered drawing, and that drawing gets rejected, you have wasted 3 hours of your time making that drawing.
But if you send a rough sketch where the intent that you have for the design is clear, and that sketch took you 15 minutes to do, if it gets rejected, you only lost 15 minutes.
So the less time you spend on a design that might end up being rejected, the more time you have to work on other designs, or work on making the comic pages themselves
And as we all know…. “Time is money”. ;)
Until next time.
Posted by Jim Shelley at 7:23 AM

looks good, sorry it went down the drain. I really like the page layouts.

Although don't be sorry... if it had not gone down the drain... Flashback Universe would not exist. ;)

this is impressive, to say the least

I was fairly happy with most of it.