I was recently listening to a Podcast about the Lee/Ditko Silver Age Spider-man run, and it got me to thinking. People rightly acknowledge how fluid and dynamic Ditko's art was, but rarely do I hear them say anything about his design sense. As a conceptual designer, comparing him to what his peers were doing at other companies, he really thought outside the box in a number of ways. I would like to go over some of these over the course of a few articles here in time, but will start with Spider-man's mask today.

With the classic web-head look, I think Ditko introduced the concept of the completely masked Superhero (at least at Marvel, if not for the Silver Age in general) Is there another superhero whose faced is completely hidden in a Silver Age comic at the time? 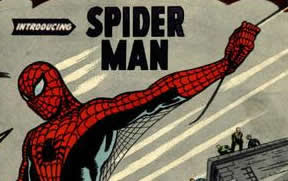 The only one I could come up with was Iron Man, and Spider-man precedes him by almost a full year. It makes for a striking visual with the exaggerated eyes and lack of mouth to give you insight into the character's thoughts.

While it might be arguable how much this fully masked designed played into the popularity of the character, what is important is how much it adds into the transformation of Peter Parker into Spider-man. It completely removes any signs of the callow boy we are first introduced to at the beginning of the story. 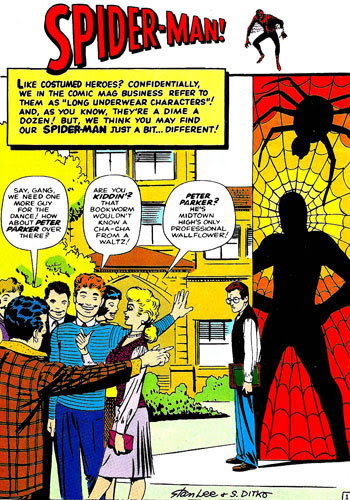 The full face mask is also is significant because it allows Lee and Ditko to compartmentalize the two characters a bit. Peter remains a young boy at odds with his world while the Web Slinger is the MAN. As Ditko himself says:

I wasn't sure Stan would like the idea of covering the character's face but I did it because it hid an obviously boyish face. It would also add mystery to the character....

As the series progresses, there will be times when a portion of his mask will reveal his true age to which observers are always astounded that he is just a young boy. (Like in Marvel Team Up 4 where Spider-man steals a kiss from Marvel Girl.)

This idea of the faceless character would be one that Ditko would revisit a number in his career, most notably with The Question: 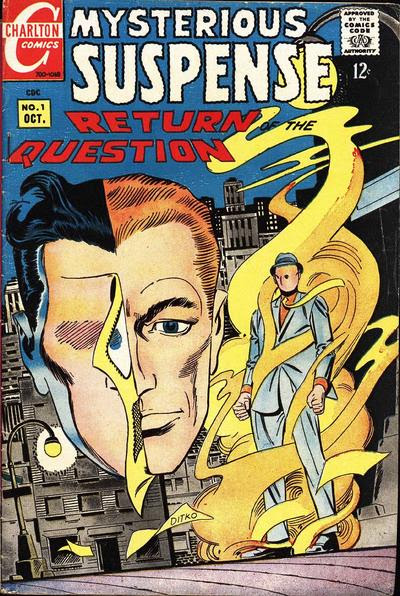 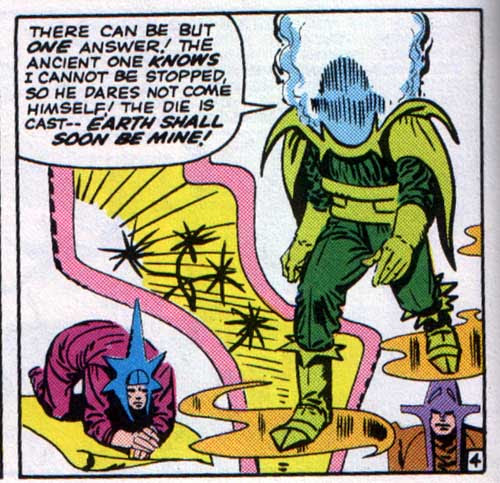 Later versions of Dormammu would add a mouth and more expressive eyes, which I think was a bit of a mistake because it removed some of the mystique and unapproachability* from the character.

As to the design of Peter Parker himself, I think need to look no further than this classic self-portrait of Steve Ditko: 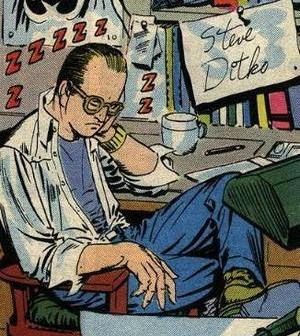 - Jim
*Yeah, I'm not sure unapproachability is even a word, so feel free to suggest a better one.
Posted by Jim Shelley at 7:15 AM

Good point. Ditko certainly had a strong and unique decide sense--different from Kirby's but no less unique.

Well, there is Dr. Fate from the 1940s, though the full mask didn't stay around very long originally I understand. Plus, his JSA counterpart Sandman. And, the obscure Micro-Face. It's still an unusual choice if not unique, especially by the time Spider-man came around.

I think the full mask has contributed to the character's popularity over the years. I've noticed him to be generally more popular among minorities as compared to other heroes for example and I cannot help but think that's because the full mask makes him easier to identify with.

In-story, behind the mask Peter Parker is free to act and to say exactly what he thinks. Which is a wish-fulfillment for both himself and really anybody, especially younger readers.

To the reader, I think the appeal of the full face mask is that it makes it easier to imagine yourself as the character even when you know that you look nothing like the protagonist.

I guess it just kind of speaks to the primal power of masks in general.

@Trey, your comment has me wondering who had the better design sense, Kirby or Ditko.

@cash_gorman - yeah, it's strange how the first wave of Silver Age heroes at DC didn't have any masked heroes. I wonder if that was because the heroes they had been writing about (Superman, Aquaman, the SA Space characters) showed most of their faces.

@MattComix - yeah, I agree with you with the identity transference and the primal power of masks. I think a lot of Dr. Doom's appeal has always been his faceplate mask.

What's interesting is that got flipped a bit in the 90's with people like the Punisher.

I think Dr. Doom was pretty explicitly a counterpart to the "public" identities of the FF. A similar duality occurs with Captain America (masked, but carrying the "identity" of America) and Baron Zemo (full mask, representing little more than faceless evil).


Interestingly, Spidey flips this, being a fully-masked hero up against Doc Ock and Rhino and many other villains who don't have full masks--if they are masked at all. Heck, even Green Goblin's full mask is actually stated in story to be his "real" face. So along the lines of the power of masks, Spidey ends up being the faceless good against easily and openly-identified evils. Wish fulfillment indeed!

@Luke - those are some very good observations! I can see making an article out of that (or maybe you've already covered everything.) The costume as totem theme. I'll have to think some more on it.

I think Ditko was much more versatile in his design sense than Kirby. the design aesthetics of Spidey, Blue Beetle, Hawk & Dove, The Creeper, etc. were all very different frome ach other. Unlike Kirby (especially later in his career) whose designs have a similar feel to them. You can look at a costume that Kirby designed and say "Hey, that's very Kirby-ish."

@Reno - yeah, that's my gut feeling too. It's hard to be sure, but just looking at, for instance, The Inhumans, The New Gods and The Eternals, I see a lot of the same motifs. Whereas with Ditko, just look how different all of the Spider-man villains look in the first 24 issues. Was there ever a Kirby character who looked like The Sandman?

I'll try to do an article with a full list of examples.