My first five comics in 100 words or less. 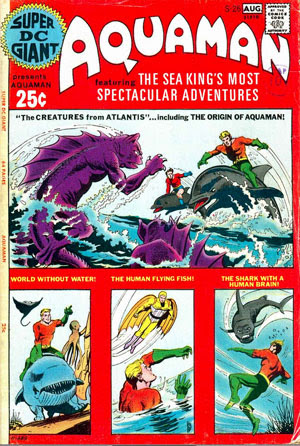 Aquaman Super DC Giant 28
August 1971
This is the first comic I ever got, purchased off the spinner rack at a 7-11. I'm pretty sure I got this because I had seen Aquaman cartoons on TV. Aquaman rides a whale with legs, fights the Human Flying Fish and meets Aqua-woman = my 5 year old mind completely blown. The guys at CosmicTreadMill have a complete synopsis of the issue here. 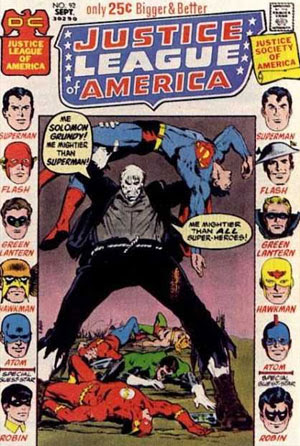 Justice League 92
September 1971
A month later, I went back to the 7-11 and saw this cover. To this day I remember thinking that it was strange that the man on the cover holding Superman (Solomon Grundy) was using a rope for a belt. It was probably this mysterious rope belt that caused me to ask my mom to buy this issue. (That and I had seen Superman on tv as well.)
Also in this issue, we see the Robin of Earth 2 get a revamped costume. A costume Pierre hates for some reason. :D 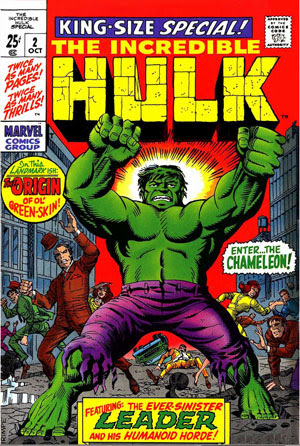 Hulk Annual 2
October 1969
While this predates my Aquaman comic, it was the third comic I got, because I traded my Aquaman comic to Steve Previtt for this issue. With art by Steve Ditko and Jack Kirby, this comic contained 4 awesome Hulk stories. The bulk of it focused on the Hulk's battles against the Leader's Humanoids, a group of flexible, faceless androids that sort of screams Steve Ditko must draw us! Favorite moment, the Hulk uses what looks like two army field toliets to destroy two planes. Nicely done Hulk!
After that successful trade, I went back to Steve and traded some of my brother's baseball cards for this issue: 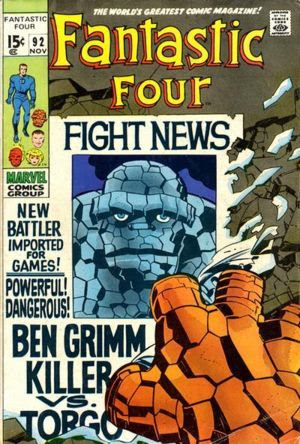 Fantastic Four 92
November 1969
The only thing I really remember about this issue is it was my gateway drug to the wonders of Gladitorial Robots with the introduction of Torgo. Check out this page to see what I mean: 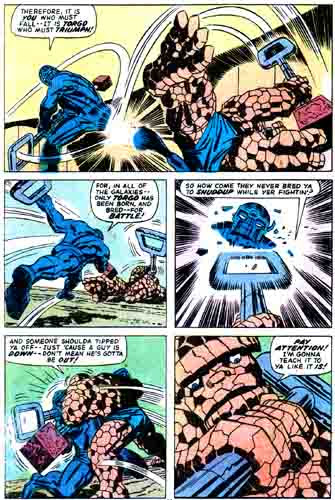 Strangely, you would think such an awesome comic would have inspired me to buy more Marvel comics, but I think my inability to get to the 7-11 when I wanted to probably kept me from doing so.
A few months later I got this comic: 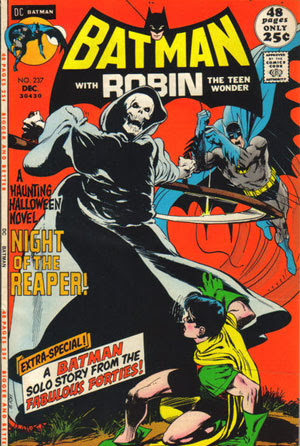 Batman 237
December 1971
A tale written by Denny O'Neil, from an idea by Bernie Wrightson with an assist by Harlan Ellison and art by Neal Adams. A story belonging to the Hippies at Rutland Halloween continuum, this comic actually scared me a little. (Not sure if it was the hippies or the Reaper that scared me. )
Up until this issue, my comic purchases were pretty sporadic (as you can see by the gaps in time) It was probably soon after the purchase of this issue that I started really collecting. I'm not sure what turned me from a casual reader into an avid collector, but I think I'll try to figure that out in a future blog post.
Feel free to tell me what your first five comics were!
- Jim

If those were your first five, no wonder you liked comics! What a great bunch of issues! I wrote something on a similar topic a while back but I may have to revisit it because this was so entertaining.

I absolutely adore that Neal Adams cover! I haven't read that comic, but I'll read anything done by the O'Neil/Adams team (Green Lantern/Green Arrow being one of my all-time favourites). And Ellison!!! I had no idea he did work on Batman (even as an assistant). That alone seems like a good reason to check that comic and get hooked...

I can't exactly remember my very first 5 comics. But I think it should have been:

1) An argentinean comic called "Patoruzú", which were reprints of a comic from the 60s or 70s. I can't tell for sure when it was originally done, but as a 5-year old kid, I thought it was "alright". Reading it years later I thought "How is it possible that something this terrible is so popular?". A mystery! I'm pretty sure this is the first comic I read.

2) An issue of John Byrne's run on Superman (spanish edition), which I hadn't liked as a kid. I thought it was too dark for Superman...

3) I remember getting my hands (probably in the very early 90s) in the colombian edition of some Batman comic whose authors I can't remember (I do remember Byrne though, which is weird because I've never been a fan, and at that age I didn't pay attention to the credits). I remember there were tons of characters from the DCU, and being a fan of the Adam West show, I didn't like the comic because I didn't know all those characters and thought they had nothing to do with Batman (I was probably 6... that's my excuse ;) The Phantom Strange was one of the guest characters in that issue, and as a back up story, there was a Superman comic (Byrne again).

4) The comic adaptation of the first Batman movie (argentinean edition). The first Burton movie came out when I was 6, and while I didn't get to see it until a year or so after it had came out in Argentina, I remember I loved the few I saw (trailers on tv, maybe? I can't quite remember). I loved this comic and re-read it many times. Denny O'Neil wrote the adaptation and the great Jerry Ordway did the artwork.

All these comics were bought on a second hand book store on summers, while on vacations from school. They didn't have much variety (in fact I think Superman and Batman were the only "regular" titles that you would find every summer. I had no idea of Marvel at the time, as there were no spanish-language editions as far as I can tell, I think those started appearing in the early-mid 90s). So this one summer, I was probably 10 or 11, I went to this place expecting to find more comics and... the horror! They had run out of Superman or Batman comics. Instead they had this comic that looked very different to what I had seen, and it had a weird title...

5) "La Cosa del Pantano" (Swamp Thing...), and since there wasn't anything else (well, there were books, but I was able to read books during the school year...) I took it. It was a Swamp Thing issue (spanish edition once again) by Moore, Bissette and Totleben. I didn't expect much from that comic, but by the time I finished reading it, I was addicted. And it probably influenced what were going to be my choices when it came to buy comics years later: following series because of the authors instead of characters.

@RAB - Yeah, I'd put that cover up against any of the last 100 covers generated by Marvel in the last year! Damn, they knew how to make comic cover back then didn't they?

@Diego - Thank you for the awesome rundown on your first five! I gotta say, La Cosa del Pantano probably a term I'm gonna throw out there next time I go to a Mexican restaurant, you know, just to see what they say!

The funny thing is, reading your list, all your titles are fairly new, which is weird when I know one of your favorite tv shows is the old Planet of the Apes TV show!

La Cosa del Pantano could be a good name for some vegetarian food, I guess. A mysterious dish (only for those curious enough) to be ordered before the main course :P

As for the list, those were the comics I was able to find at the time, having grown up in the late 80s/early 90s. I guess it's a similar case as with music or movies. When I was 8 I loved Terminator 2 (which I still like), but then discovered things like The Good, The Bad and The Ugly, and then Citizen Kane, and I liked those better. I just didn't know those movies existed at that time. So in a way, for me (and I guess this happens to lots of people) it's a case of start investigating things that were done many years ago (not because of nostalgia or something... just curiosity and possibly a lack of interest in things done at the present) and finding incredible works that I wasn't aware of... :)

I have memories of all of these comics, especially the Batman issue, which I picked up at my grade school's fall festival when I was in fourth or fifth grade (they had a white elephant sale, and me and my other comic-reading friends would always race to that as soon as the doors opened in an effort to beat each other to the handful of comics they inevitably had). I always dug the Rutland issues because of the "normals" in superhero suits and the appearances of real people (though, yeah, the hippies scared me, and still do!).