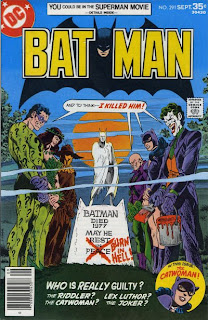 Today's PCDW column was written by Caine (who is helping me out during a very busy month.) Take it away Caine!
We left off last time with: "Bottom line: I think the comics industry is headed for a Subprime Megastory Meltdown..."

As it turns out, that's not far off from the truth. It was announced recently that Nightwing, Robin, & Birds of Prey would all be canceled by DC upon their February issue release. Now, those books by themselves are not "Mega Stories". Each of them do however play a roll in the Mega Batman Story: "BATMAN:RIP" which has been a major part of DC'S 08 line up since May with Batman 676.

Each book has been on the stands, month after month, for at least nine years straight and some of the characters [most notably Dick Grayson/Nightwing] have 4-6 decades of continuity and fans.

None of that speaks to the three lost revenue streams that DC has eliminated in monthly comic book releases, cross overs, tie ins, and graphic novels.

Marvel Comics:
"Marvel’s investment in digital media, including digital publication of its comic books, is costing some profit on the publishing side, Peter Cuneo, vice chairman of the board, told analysts in today’s Q3 earnings call.
According to the transcript (via Seeking Alpha), Cuneo answered a question about lower publishing growth by reminding: “Remember also that we are making a substantial investment in our digital publishing effort and we’ve noted in our press release today that the out-of-pocket in 2009 we anticipate will be around $6 million for that effort.
So when you look at the publishing segment as a whole, you will see a decline in the profitability.” The company has invested $2.5 million to $3 million so far this year and plans to finish at $4 million. That would bring the total digital media investment for 2008-09 to about $10 million."

"Asked to flesh out the digital initiatives, CFO Kenneth West added: “I would imagine that probably in the year 2011, we are going to see the first real positive contribution associated with digital media. That would be a combination of ad revenues, digital subscribers picking up on the subscription of comic books but not until that period, because we’ll continue to invest in that and it’s going to take some time and the dollars that we’ve built into our forecast.”
He wouldn’t project the 2010 level of investment but said “we would anticipate the continuation of the digital investment for our future.” -the beat

Darkhorse Comics:
"With that said, some of the traditional formats seem to be less desirable. We see a softening--I wouldn't say collapse--but a continued softening of the pamphlets and that's for a variety of reasons.
As we see the age of the average comic book reader move upward, I think people who read comics and graphic novels are less interested in getting 20 to 22 pages of story once a month over a period of months as opposed to picking up a book that has a complete story and is in a format that they can put on their bookshelf.
From our standpoint, the market for pamphlets continues to soften. That doesn't mean it's still not strong for certain titles, but it's harder and harder to break new titles onto the comic shelves." - icv2.com

"The space between the channels on your television is where the future of communication, wireless Internet, and even portable television lives. The potential for these White Spaces is limited only by creativity, ingenuity, and the need for clear rules of the road."

"After more than four years of study and 18 months of intensive testing, the FCC is ready to open the TV white spaces. This decision promises to fast-track hundreds of millions of dollars of much needed investment capital and bring wireless broadband, education and public safety applications for all Americans." -youtube

Remember the PLASTIC that we reported on previously? The versatile reader with USB and wireless capabilities?

PLASTIC+WHITE SPACES= instant comics on the go from anywhere you can pick up a wireless signal. With this one two punch a consumer would no longer need to wait for their schedule to clear up so they could go to the comic shop/book store, you wouldn't have to wait for mail order comics to show up in your mailbox. The best part, you wouldn't be stuck sitting in front of you're computer reading comics online. The PLASTIC is portable.

Just over a week ago AT&T announced free Wi-Fi for iPhone and BlackBerry users, and now the wireless company has added 3,000 more Wi-Fi hotspots from hotpspot operater, Wayport. If you're an AT&T customer, your Wi-Fi outlook is getting better by the day. -lifehacker

Unfortunately for comic fans, iTunes converts all photos (or jpeg comic images) to a downscaled resolution when transferring to your iPhone or iPod touch so comic jpegs are unreadable. Fortunately, iPod Touch fan Studangerous has put together the Ultimate icomic Thread to help people out. This thread explains how to use ComicViewer and iComic to read comics on your iPod Touch. Both apps utilize the touch-screen zoom, landscape view and accelerometer to provide a great portable electronic comic book reader and zipped image viewer. -ipodtouchfans.com

iVerse, a company that's turned Shadowhawk, Proof, Flash Gordon and several other comics titles into iPhone applications, will donate half of all proceeds from a "Hero Initiative Spotlight" book each month to the charity. The program kicks off this month with Shadowhawk v.2 #1, which is 99 cents in the app store. -newsarama

Across the pond in the UK, Stuff.tv has the HAWT exclusive on Sony and Universal's joint venture spread PoP entertainment vending machines full of Sony PS3 games and Blu-ray discs and DVDs. You can even download media directly to your PMP or SD card. That part is pretty cool, actually.

It would only seem logical that if there were a market full of wifi-comic consumers willing to pay, POP would carry comics as well.

@Matt - I totally agree. In this day and age of characters coming back from every death that's occurred in comics, how much impact does it really make anymore.

And all of them have come back in one form or another. Certainly DC must know that trick has lost it's appeal by now. Or I wish they knew.