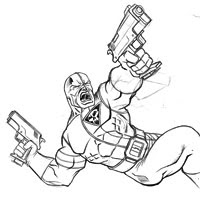 Where can I find a list of all the Public Domain Superheroes?

Wikipedia used to be a great source for a complete list of all public domain comic books characters, but as with all useful wiki pages, some jackass put [citation needed] on the page, and now it's gone.

Now the best place to start is the Golden Age Comic Book site:

This is such a confusing issue partly because American Copyright law is a mish mosh that changes depending on the time a character was created AND because it's hard to verify exactly whether companies really took the time to copyright/trademark their characters correctly the first time.

Witness this discussion at Wikipedia over the Nedor Superheroes:

...The above report on Nedor characters may or may not be accurate depending on the actual circumstances of the company when it ceased publishing. It is clear that Ned Pines did renew copyright on most of his characters' first appearances, despite widely reported statements to the contrary. Also, Pines sold one of his companies, Popular Library, to Fawcett Publishing, who in turn, sold it to CBS, and today, the Nedor characters would be owned by either Bertelsman AG or Warner, if the comic books they appeared in were published by Popular Library. If Ned Pines used different companies to publish these books, they may be in public domain.

So, given all that, when Pierre came to me with an idea of working on some Public Domain heroes into our Flashback Universe, I was a little hesitant.

First, how would we know if they were really public domain?

Still, I liked the idea of working in the Golden Age setting, so we decided to create our OWN Golden Age universe, which we smartly dubbed the WayBack Universe.

The first stab at this was to create a super group of characters similar to the Invaders. If you've read the Paladin comic, you've already seen a reference to these characters. In that comic we call them the Intruders, but in other places, they have been called the Insurgents. I'm going to say that because their missions were classified by the government, an *official* name was never recommended. ;)

One of the coolest characters in that group is the Golden Age WildCard: 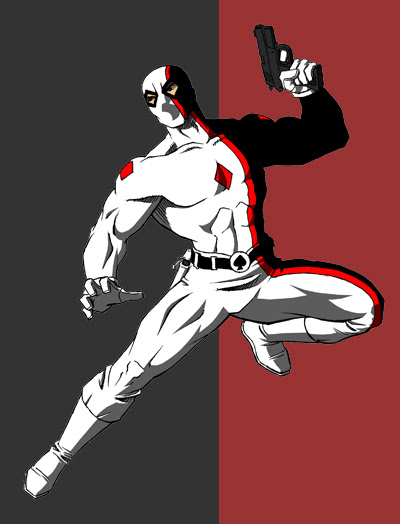 Another favorite of mine is the Crimson Cossack (there's a big story behind this pose that I won't go into here...) 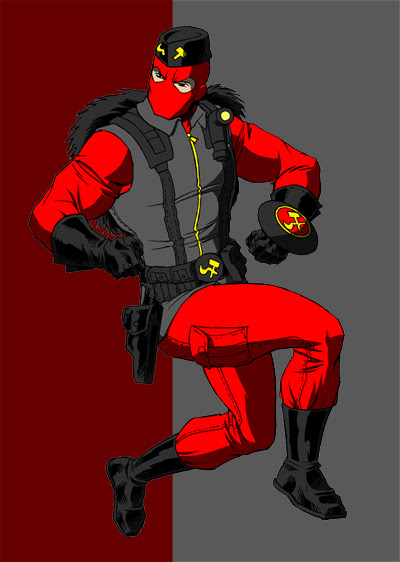 Not seen in the Intruders picture is probably one of my favorite WayBack characters - a character who sort of started as the Gray Ghost and changed into something much cooler I think - The Purple Puma. 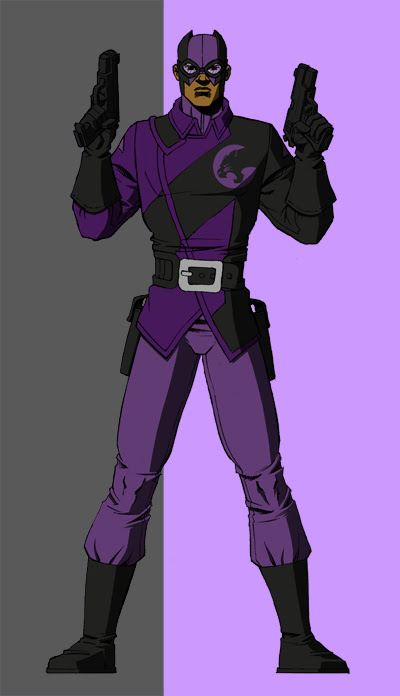 And of course heroes are only as good as the villains they face, so we've created quite a few WayBack Universe Villains as well...here is a group we call the U-Bolts. 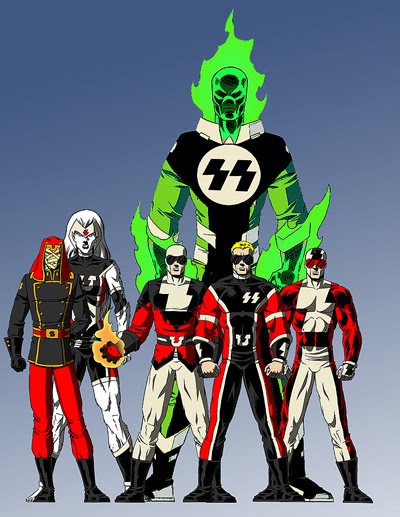 And here is a another group shot with a few familiar faces in the mix...click to enlargify. 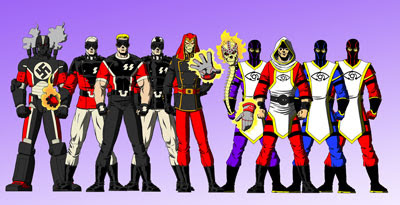 We have several more characters, and hope to have a complete comic featuring some of them in the near future. (I just need a story... :D )

Hi, I'm the guy who wrote that quote on the Nedor heroes. I've been studying public domain as it applies to comics, especially Golden Age material. It appears that some Nedor material was released by Better Publications, Inc., so what I said about Popular Library doesn't apply.

It would appear that the Nedor folks are fair game, and some of what I've found is surprising. Would you beleive Captain Marvel appears to be public domain? Also, most of Timely's characters are with the exception of Captain America, but most certainly Sub-Mariner is PD. I daresay Marvel would not agree with me on this, but, read on.

I am not a lawyer, but what one has to do is look at the original material on a case-by-case basis. Simply, characters are not copyrightable onto themselves. They are however, protected as elements of the stories they appear in as characters. Before 1976, every copyrighted work was entitled to 28 years protection, followed by a 2nd 28 if, and only if, the copyright holder renewed for that period. After that, they became public domain.

Well, since comics, at that time were considered throwaway property, very few comics were renewed, and mistakes were made by the publishers. Most of Timely's (Marvel's) material wasn't renewed until the late 1970's...oops.

Let's take Sub-Mariner, for instance. He first appeared in a story published in Motion Picture Funnies Weekly #1. This was published by Funnies, Inc. Because this was a promotional book, there are doubts as to whether it was actually "published" or not, in a legal sense. However, the story was reprinted in Marvel Comics #1, which was, surprisingly, not renewed by Marvel by 1966. This oversight probably occured because of the title change to Marvel Mystery, but nonetheless, Marvel #1 is public domain. One note, Carl Burgos did renew the Human Torch feature, so that may be protected by the Burgos estate.

Try looking to the US Copyright Office Guide to Renewals, availible at Gutenberg Project. Be careful, but it looks like theres tons of stuff out there.