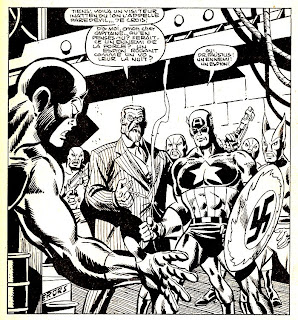 Hi guys,
I had a tough time deciding on what to write for this second blog post of mine.
Not for lack of subjects or ideas.... quite the opposite. What do I start with? Out of the thousands... no the hundred of thousands of things that I could discuss?? ;)
Last time I mentioned how, like many other aspiring artists, I was learning to draw by reprodrucing the work of some of my favorite artists.
So lets start with that. But which artist?? I am always torn when the time comes to chose one over the other.
Who do I start with?? Byrne?? Perez?? Kirby??
But then I realised that I had no choice. I had to start with the one that probably influenced me the most.... I HAD to start with...
SAL BUSCEMA 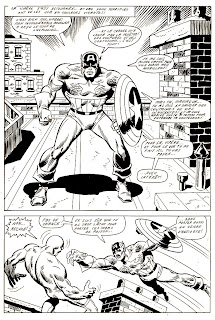 As a kid, although he probably has worked on pretty much every series ever published by Marvel at the time. Sal was the ultimate Captain America artist. Not that Byrne and Rubenstein, and later Zeck and Beatty did not do an awesome job drawing Cap, but as a kid Sal was the guy who was drawing the best version of Cap at the time.
Although, when I was buying Captain America comics, it was later in Sal's carreer when he was inked by Don Perlin, boy that was good comics. But I was able to get my hands on some back issues with his earlier work on Cap. Those were awesome as well.
Sal was also the ultimate Hulk artist when first inked by Joe Staton, then by Ernie Chan. Not that Keown and Farmer did not do an awesome job on the series later, but to me, Sal's Hulk was the ultimate version of the character.
But the best time must have been when he inked himself.
His rendition of Captain Marvel was great...

...heck even Woodgod looked pretty good when drawn by Sal. ;)

Also Sal did an awesome job on the Avengers aroud the time of the Celestial Madonna story inked by Joe Staton I think.
All those left a strong impression on me as a kid, and were a huge influence not only on teaching me to draw, teaching me storytelling, but even much later as I started working professionally on various projects.
I would say that Sal's work really left it's mark on me, that he is my biggest influence.
And much... much... much later, I was able to enjoy his work on Rom, the Spacenight. Why much later?? Well as a kid, I was reading french translations of Marvel comics. And sadly Rom was not translated in Quebec.
I first saw an issue of Rom ( I later learned that it was issue 7, my favorite in the series) as part of some anthology from France that I bought in some sort of garage sale. I was able to track down a handfull of back issues, but it was only over 20 years later that I would be able to read the entire series featuring the greatest of all Spaceknights.
Boy... that was GREAT comics.The early issues when Sal inked himself have to be my favorite. 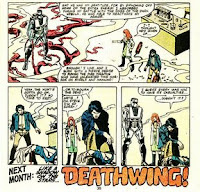 And the best part was that I was finally able to read the final chapter (at least it was when the comic saw print) in the saga of Nova the human rocket. Being a huge Nova fan, that was a special treat. 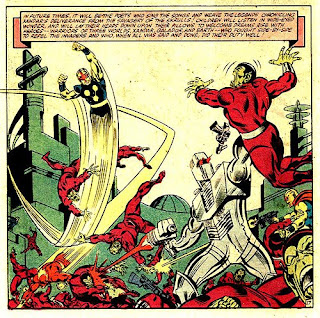 Strangely, when you talk about Sal to various other fans, you often feel like to many, Sal is just the lesser of the Buscema brothers for some reason. Might be why John gets his own page in "The great comic book artists" by Ron Goulart, but there is no mention of his brother Sal.
To me, I have always preferred Sal.... not that John's work was not awesome, but Sal's work was more graphic/stylised, and I loved how Sal would stylise the human figure or his rendering. Only years later would I realise how much of Sal's style (or John for that matter) would come from Kirby.
Wether it was because he loved Kirby's work and was trying to emulate Kirby, or because that was the policy at Marvel at the time to have their artists draw like Kirby, I have no idea. But I sure loved the result. It also made me realise how much more influenced by Kirby (or a truckload of other artists) I was then I even realised. But that will be the subject of another blog.
Until next time. ;)
Posted by Jim Shelley at 5:34 AM

I suspected you would like/appreciate my little blog about Sal.