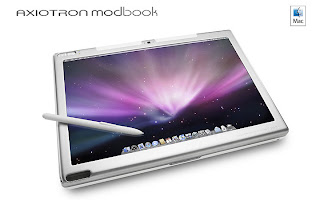 I've got a LOT of stuff to cover today, none the least is the intriguing rumor floating around the net today that Steve Job's is going to announce an iTable at the Apple World Wide Developer Conference June 9th.

Coupled with the recent job posting for multi-touch developers, it really seems that Apple is gearing up for something big in the portable computer world.

Many bloggers had suggested that Apple was going to unveil a 3G iPhone at WWDC, but that announcement has already been made...

Reportedly, Apple would instead announce a brand new portable device at WWDC. No other details of what this device might be, but there have been rumors that Apple was developing a mini-tablet multitouch device for launch in 2008. This PDA-like device would reportedly have a higher screen resolution (720x480)and be about 1.5x the size of the existing iPhone.

Whether this is true or not is hard to say, but the fact that so many people in the MacRumors forums are looking forward to an iTable should say something to somebody...

For those of you who can't wait until Apple announces their iTable, check out the Axiotron Modbook. Pretty cool, but it's about $2000. Not quite an impulse item is it?

You've got to give ol' Dan Didio some credit. There he is with DC sort of getting its ass kicked by Marvel sales-wise right now, and when confronted with the question of possibly offering DC comics for download, he has no problem dismissing this avenue of revenue.

From the ECCC: DC NATION thread on Newsarama

Then the subject of downloadable comics came up to which Didio replied that, comics being a collectible commodity, digital downloads were not seen as that important right now. However, he did say the DC was staying aware of that area so that should the demand shift they would be ready.

There you go folks - DC is rolling in so much dough right now, that they have no impetus to try an open up another distribution channel for their properties.

I sure hope someone at Time Warner sees that. I suspect their heads will explode.

And yet, there is something slightly self serving about Dan's statement - see, DC is a publishing company. If someone at Time Warner were to get the idea to copy the Marvel Digital Comics Unlimited, I sincerely doubt they would use inhouse DC people because that's just not the Time Warner way. They like to *buy* outside solutions. Like AOL. Like Zuda. So, it's really in DC's best interest to downplay this whole downloadable comics thing.

Maybe now would be a good time for Serj at Zcult to ask DC if they can start posting DC torrents again...

But Manga will Save Paper Comics!

I got an email one time from a reader who said I was probably right about American Comics, but Manga would save American paper comics (which makes as much sense as Playboy saving Tijuana Bibles, but let's move on)

Well, according to this item from Heidi MacDonald's the Beat, Manga may not be the great white hope we thought it would be...

The Business Takeaway for us lovers of non-paper products is this part of the post...

Aside: for the record, I think manga sales in Japan will continue to drop by ~5% a year until digital distribution becomes more than just a novelty, and is instead firmly established as the ‘third format’ — which will happen in Japan where the weekly/monthly ‘phone books’ are already largely considered to be disposable/recyclable media (and where everyone has a super-awesome cell phone that not only displays manga but also, in a pinch, can open an exploding Gate and be thrown at invading aliens) but not in the States where the nearest equivalent to the throw-away manga magazines are instead polybagged (don’t forget a cardboard backer) and sold at significant mark-up on e-bay — these are two completely different business models, folks, so unfortunately, no digital superheroes for you

Meanwhile in America..Comics Cost To Damn Much!

So declares the ever eloquent Tom Spurgeon in his post: A Thought Or Two On The Notion Of Comic Books Costing Too Darn Much

For the most part, it's a lot of what you've probably thought yourself, but didn't want to say outloud - if comic stories are now told in 6 issue arcs, and I'm only getting 4 a week instead of 6 because of gas prices or something, then my chances of getting all the various parts that make up a complete story (Beginning, Middle, End) are now reduced. Thus, each week, I'm left sort of wanting more from my comics. Not a good thing.

The most interesting part for me is Tom's statement that...

And I don't think it's as easy as the on-line comic replacing the serial comic as the entry point; that's a seismic shift in culture and in the nature of the reading experience for me to believe it does exactly the same thing. In fact, I would argue that as a group the current on-line comics models come closer to encouraging a medium more like comic books in the 1940s than comics in the 1960s or 1980s.

I asked Tom for a clarfication on this point as to whether he meant web comics or digital comics and this is what he said...

Both. What I basically mean is that they reinforce a kind of mainstream commercialism both overt and subconscious more than they foster personal expression over commercial concerns, which I'd need to defend in an entire
essay.

Not sure I entirely agree with that statement.

I look forward to his defense essay. :)

btw - I came in late on the Didio newsarama thread, and I really wish I had gotten there sooner. So, if you see a thread on a message board that you think might interest me, feel free to email me.