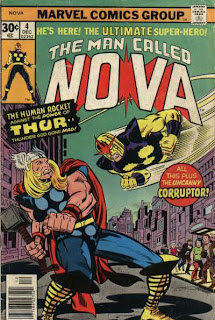 Last time, I mentioned how by being influenced as an artist by Sal Buscema, I was more influenced by Kirby then I even realised.

What did I really mean by that??

As a kid, my artwork was a lot influenced by Sal Buscema. Even when I was reproducing a character by someone else, I would give him various elements very SalBuscemaesque (ex; I would draw a Mike Zeck Punisher, but I would give him a face drawn in the style of Sal).

If you had asked me at the time, I would have told you that Kirby's work was a liitle too weird sometimes or too cartoony (yes... I know... that is pure blasphemy ;) ... but it would only be years later that I would truly appreciate how great Kirby's work is and how much Sal was influenced by it)

But little did I realised at the time that a lot of Sal's work was inspired/derived from Kirby himself.

It might explain why Ron Frenz was able to imitate Sal Buscema, then switch to Kirby.... which he was already doing indirectly by imitating Sal... then to go back to imitating Sal.

And since Kirby influenced pretty much everyone at one time or another, whenever someone says that he was inspired by Sal or John Buscema, John Byrne, George Perez, Walter Simonson, and countless others.... what they are also saying is that they were indirectly influenced by Kirby whether they know it or not.

And after working for years in animation on countless series (okay.... I could count them.... but you know what I mean ;) ), I learned too look at the style of an artist and try to see where that artist is coming from. For example... I can see how John Byrne's work is a strange mix of Kirby, Neal Adams.... and something else that I can't quite put my finger on it... I suspect that it is something that has to do with the fact that he was originally from England... but I can't prove it.... yet. ;) But I would not be surprised if years from now, I would get my hand on a british comic and scream EUREKA!!! That I would eventually find the missing piece to the John Byrne puzzle.... or something like that. ;) One fun part is that it is a never ending quest.

What use does this have??

Well in animation, you have to be able to imitate the style of whatever project that you are working on. And the key to doing that is being able to understand where that style is coming from.

So if someone asks you to work a series that looks like Justice League Unlimited, understanding what styles influenced JLU (Kirby, Mignola, Akira, etc) is a big help. I don't know how many times on such a series did I save myself from a jam by drawing a Kirby character/hand/expression, then tweaking it to fit the style of the series I was working on.

But if I had not been able to understand the style and where it took it's inspiration, it would have been much more difficult.

Hope this will help some of you. ;)