Revisiting the Wild Wild West: The Night of the Green Terror 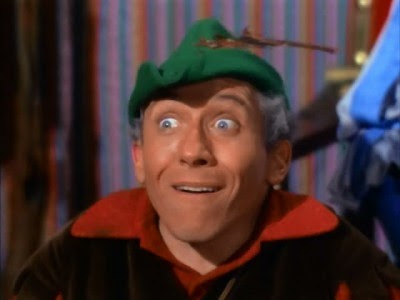 "The Night of the Green Terror"
Written by John Kneubuhl
Directed by Robert Sparr
Synopsis: On their way to famine-stricken Native American village, West and Gordon are puzzled by the complete lack of animal life in the forest, but even more surprised when they encounter a knight in armor! Doctor Loveless returns.

Trey: Loveless is back and his creator, John Kneubuhl, is back writing him.
Jim: Nice to see the charismatic Dr. Loveless and lovely Antionette as a duo again!
Trey: Alas, I believe this to be the last of Antionette's appearances with Loveless.
Jim: Well, that's a shame! Anyway, I like how this episode starts with a hint of menace by telling us all the animals are apparently missing. You can't go wrong with that set up. How Kneubuhl thought of transitioning to that to a knight in armor is a bit of a mystery to me.
Trey: Kneubuhl, and WWW in general--see "Night of the Raven"--is getting increasingly nonsensical with their Loveless scripts. This one is practically on a Gold Key comics level! Why the Renfaire stuff? No reason is ever given! I guess Loveless just likes a bit of theatrical flair to his plots?
Jim: Its entertaining nonsense, though. I like how West and Gordon just ignore Loveless initially. They're soooo over Loveless' plans and tirades. They don't even question why he's cosplaying Robin Hood.
But you are right: the whole "Lord of the Forest" bit is such a stretch here. If Loveless' goal was to use superstition to influence the Native American tribes, wouldn't it have been better to use a being from Native American mythology? What did the Kneubuhl feel this contributed to the episode exactly? If I had to guess, I'm going to say that the medieval costumes were included to add colorful, visual appeal to the show. 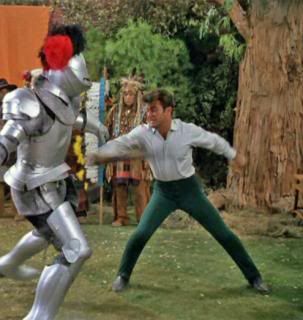 Trey: I suspect you are right. It's for the visual.
Speaking of the Native Americans, Kneubuhl was biracial, half Samoan. In addition to being a screenwriter, he was Polynesian historian. It's an assumption on my part, but I would think the plight of native peoples would be on his mind. While there are certainly some positive aspects in the portrayal here, there are also a lot of the same old stereotypes. It would be interesting to have known Kneubuhl's thinking on these issues.
Jim: I agree. Speaking of social concerns, this episode's "super insecticide" weapon strikes me as being influenced by Rachel Carson's Silent Spring, a book which was very popular in the early 60's and was significant in helping pave the way for important regulations regarding insecticides.
Trey: I think that's a strong possibility. The connection is muted though by the green powder having inconsistent properties. Loveless presents it as a poison, and that's how it has acted prior to the episode, but when he starts filling balloons with it, it becomes a firebomb.
Jim: It's just the genius of Loveless at work.
Posted by Trey at 7:00 AM