Revisiting the Wild Wild West: The Night of the Ready-Made Corpse 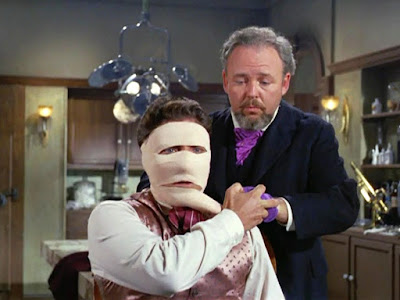 "The Night of the Ready-Made Corpse"
Written by Ken Kolb
Directed by Irving Moore
Synopsis: After the assassination of a Latin American political figure and the apparent death of the assassin, West and Gordon discover the mortician, Fabian Lavendor, runs a side business: faking the deaths of wanted criminals.
Trey: This episode marks the end of an era for WWW, though it's obscured a bit by the episodes not being aired in production order. The creator and sometime producer, Michael Garrison, died while it was still being shot. Bruce Lansbury would take over as producer from here on.
Lansbury is blamed by some fans and writers for the show taking a less fantastic turn in later episodes. This was at the insistence of the network, however, and not necessarily Lansbury's choice. In fact, he produced several pretty fantastical episodes this season, though they did get fewer as things went on.
All that aside, I think this is a great episode. A standard sort of plot for an action adventure show, true, but it does have a bit of twist at the end. And then there's Carrol O'Connor's Lavendor who steals the show.
Jim: I'm afraid I have to disagree. While I enjoyed O'Connor as Lavendor, I found this episode a bit of a dull in stretches.
Trey: Well, I agree the climax is a bit deflated, maybe, or perhaps it could have been paced better. West cat-and-mouses in the funeral home, frees Gordon, but then they're capture and  only bring about the villain's demise indirectly. It seems like maybe they could have cut some of the funeral parlor shenanigans.
Jim: That was definitely my feeling. but that might just be me, watching it in 2020. Maybe when viewed in the 1960's, the funeral parlor scenes and with the plastic surgery had more novelty too them.
Another thing that made the episode less interesting to me was the lack of cool, anachronistic spy gadgets. I don't expect to see those every episode, but it does seem like they only appear when it's convenient. 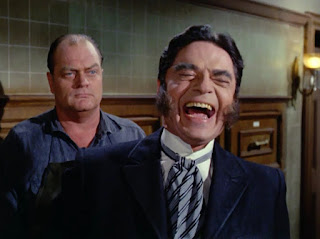 Trey: You've been jaded by too many action adventure shows, I'm sure! I agree about the gadgets, though I didn't miss them.
Jim: I will say that when the episode first started, the soundtrack was very jaunty, reminding me of Gilligan's Island at times! I think that sort of sets the tone. There are definite moments when characters are playing up their roles for humorous effect.
Trey: No doubt. O'Connor's Lavendor has a sort of humor about him, if sometimes ghoulish. Speaking of Lavendor brings me to my other criticism, though: We are given scenes foreshadowing Lavendor having an almost superhuman grip--yet neither of our heroes every have to face it. It's a non-fired Chekhov's gun!
Jim: Or Chekhov's glove, in this case.
Posted by Trey at 7:00 AM