Revisiting the Wild Wild West: The Night of the Poisonous Posey 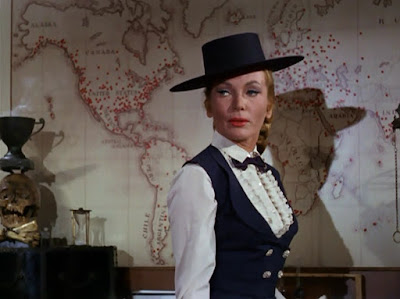 "The Night of the Poisonous Posey"
Written by Leigh Chapman
Directed by Alan Crosland Jr.
Synopsis (from IMDB): While on vacation, West and Gordon wander into the town of Justice, Nevada. After an unexpectedly exciting greeting by the citizens, they start to notice an unusual number of infamous international criminals around town.
Trey: Well, Jim, here's West and Gordon riding into a small Western town, as you wanted! I have to say, this setup doesn't make much sense. We are told the two are on vacation. Wandering around Nevada on horseback is there vacation? It seems like a less exciting version of their work!
Of course, it turns out not to be less exciting, and to actually be their work.
Jim: While I did enjoy this episode, I believe my desire to see more small Western town stories is really just me wanting to see more recurring characters in the same town. The downside to such a change in the show is it would make presenting a new mad scientist or would be dictator much harder to explain. Probably adding Bond-like side characters like Miss Moneypenny or Q to the show would have a good way to get what I'm after.
Trey: They had a butler, Tennyson, in early episodes but he just didn't stick around.
Anyway, this episode is campy in all the right ways: the comedic, clueless townsfolk--and the over-the-top criminal types. It's also sort of spy-fi in that campy way. Removed from its Western setting, it could be a Matt Helm outing--or maybe even Bond of the Roger Moore era.
But that brings me to a criticism: The "villain convention" is such an stock plot idea.
Jim: The villain convention is a standard plot idea, but it's one of my favorites. It gives a writer a way to introduce a varied array of villains with different traits and quirks without having to explain why they are there.
Trey: True, and from that motley crew, let's call out Brutus played by Percy Rodrigues, a TV staple of the 60s and 70s. He's Commodore Stone in the Star Trek episode "Court Martial," among other roles. 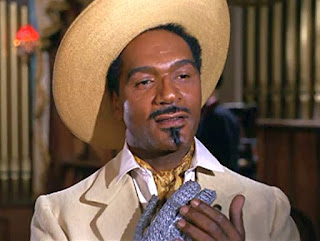 Jim: Percy Rodrigues is the actor among the villain's here. The other villains aren't bad, it's just Rodrigues brings a slow burn to his character that plays better than the cackling hayseeds the other villains all seem to be (with the exception of the pyro guy, who is fun in a campy way).
Trey: Artie gets to shine in this episode. His "divide and conquer" offensive against the criminals is nice to see.
Jim:  It seems like the writers are cluing in how to use him better this season.
Trey: West, for his part, gets some nice fights and unnerves and undermines the villainous leader with sexism.
Jim: Bond will be Bond...er--West.
Trey: I feel like this episode is structured really well. I mean, this is probably how a "standard WWW" episode ought to work. A little humor, some action, colorful villains, and West and Gordon showing both smarts and toughness. It isn't necessarily one of my favorites, though, and I think that's because it lacks the novel high concept that I want to see from WWW.
Jim: I 100% agree on the structure of this episode! It didn't have some of the backtracking or redundant scenes that we can sometimes get in the show.
Posted by Trey at 7:00 AM