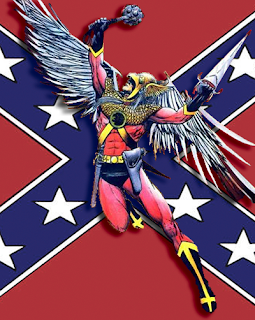 Flashback world headquarters is located in Columbia, South Carolina, the city both Jim and I call home.  Since you have access to the internet, you know what's dominated conversation in the shadow of our state house the past couple of weeks.  South Carolinians on both sides of the the Confederate flag issue have demonstrated, penned editorials, turned out in force to express their beliefs.  Many have had lifelong assumptions challenged, and some have found the courage to embrace new ways of looking at history.

The debate has extended to pop culture, as well, with Warner Bros. dropping the Confederate flag from toys and memorabilia featuring the General Lee from Dukes of Hazzard and TV Land quietly dropping the show from its summer rerun slate the next day.  Warner and TV Land distanced themselves from the controversy with zero fanfare, but the entertainment media picked up the stories and ran with them, tying them to earlier decisions by Amazon, eBay, and Walmart to discontinue sales of the Confederate flag.  John Schneider and Tom Wopat joined in the discussion.  All across America, people were talking about the General Lee.

And that's where we get to the (far more trivial) heart of this blog post.  Some of those people were calling it red.  The General Lee.  Red. 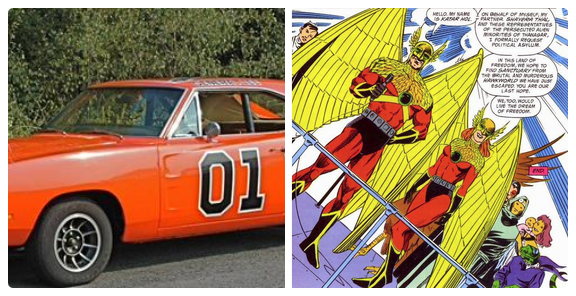 At the same time, I was engaged in a Facebook conversation about the costume Hawkman briefly wore from Hawkworld #25 (August 1992) to the end of that series in #32 (March 1993).  The original conversation wasn't about Hawkman or his duds, but given that's a — well, less-than-fondly remembered outfit, they quickly overtook the conversation.

"That red outfit is ug-lee!" wrote one commenter.

"To people of a certain age (like mine), pure red costumes will always look like long underwear," added another.

Which prompted me to ask:  Had people lost their minds?  The General Lee wasn't red, nor was that Hawkman suit.  They were orange!  While my fellow South Carolinians were mounting "heritage, not hate" arguments all over social media, I took to Twitter and Facebook to ask, "Have I gone colorblind?"

Turns out — I was wrong.

About Hawkman, anyway.  Consensus is that the General Lee is orange.  (Whew.)  But that Hawkman suit is as red as the Confederate flag.  Graham Nolan, who designed the suit and drew its debut in Hawkworld, chimed in on my Facebook thread to set the record straight, calling the color "comic-book pure red."

DC colorist Tony Tollin, who emblazoned plenty of super-suits during the same era, explained it in CMYK terms so definitive even I couldn't protest:

So there you have it.  That suit is red, even though I've spent 23 years seeing it as orange.

The funny part is that I still see it as orange.  If I squint, or if I juxtapose an image of it with Superman's cape or Robin's tunic, I can that it is red.  But that requires enlisting the cognitive part of my brain to make it red.

I imagine that's how a lot of South Carolina legislators, who previously couldn't see the inherent offensiveness of the Confederate flag, must feel.  Somewhere deep down in their bones, they still see the flag as a symbol of something somewhere between harmless and positive, but someone's shown them the color charts of harm wrought in its name and made them think twice about how it's seen through other people's eyes.  Maybe they saw quotes from Confederate flag designer William Thompson that stopped them in their tracks the way Graham Nolan's did me. 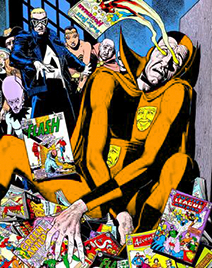 For some people, of course, Hawkman will always be orange.  A part of me feels that way.  My eyes betray what my brain knows to be true because they've spent decades seeing what they want to see, what looks better to them, what fits with their image of the past.

That's a burden I'll have to bear.

But at least I know how to pitch my idea for a Katar Hol mini-series to Jeph Loeb and Tim Sale now.  I'm calling it Hawkman Red.

Some of it could depend on the coloring of the time. I have issues of Superman where the reds in his costume appear more orange-ish and it's clearly not because of a choice by the colorist but something to do with the printing process on newsprint paper which was standard for comics for a very long time. I could find a copy of the same issue in a back issue bin at a shop but the reds would be basically correct. I can't say red or orange ((or the full bodysuit look) really work for Hawkman IMO.

As for the flag I feel it's a museum piece and in historical context or for the purposes of re-enactment is really the only way it has much business being flown in the modern day.

But in the case of the Dukes Of Hazard IIRC the flag really has no real bearing on the fiction of the show aside from simply being a graphic on the roof of the car which is meant to be related to the fact that the car is named The General Lee. In that case it has a bit more to do with them rebelling against the hilariously inept authority of Rosco and Boss Hog than advocating slavery or even separation from the union. Sort of like how Daredevil wears red and has horns but is not anything truly related to Satan because it's more to do with his daredevil feats as a blind crimefighter.

I'm inclined to forgive the flags presence in the Dukes as a product of its time but perhaps that's nostalgia on my part. I remember the show being part of a Friday night line up that also included The Incredible Hulk. Maybe I tend remember the Dukes as country boy heroes who kinda had southern flavored Batmobile than as avatars of anything negative.

I'm color blind, and when I heard people call the General Lee red, I wondered if they were right. But they couldn't be. It's orange. Bright freaking orange. Glad to hear the consensus thinks its orange as well. I'm color blind, but I'm not that color blind.

It's funny you dovetailed Hawkman with the debate on the flag, as they are both outdated concepts/symbols as I see them. Regardless of what people think the flag once represented, time has changed that. 35 years ago, I was staying in a house in London where a teenage boy had a "rebel" flag on his wall. Seeing it sort of unnerved me because even back then, I was accustomed to an association between people with dubious agendas and the flag, so I asked him what was up with that. He said it was the Rock and Roll flag. That interpretation struck me as being something Europe conjured up, though I'm curious where they got it. Shortly thereafter, I saw the flag on the General Lee and chalked it up an poor choice by Hollywood designers who never saw it outside of a movie, so they weren't aware of the implications or associations it had in the South.

As to Hawkman, all the costume changes in the world can't help that character move books in today's cosmic/mutant crowded comic landscape. Over the years he's been revamped and retconned so much that that a writer would have to be a masochist to want to tackle the character.

IF you were going to do a Hawkman book and have it work, I think it would have to be one where he was the world's ONLY hero in a pulpy time period possibly confronting Lovecraftian menaces. That might sound cool, but look at how much other stuff I had to add to make the book sound saleable. :P

Jim I agree with you about Hawkman being retvamped damn near into oblivion.

Not every character that has a lot of fans can support an ongoing but it by no means indicates they are bad characters. Hawkman may just be one that is better off as part of the tapestry of the DC Universe or on a team than holding up his own ongoing. Perhaps made for trade mini-series would be a way to balance things out?

I kinda dug what they did with him in Smallville Season 9 where he led the JSA during a unspecified "pulpy time period" before the JSA was shut down and all but erased from the history books. A TV budget couldn't really handle his wings very well (but I've seen worse honestly) but I was amazed they tried it at all not to mention having a fully costumed Doctor Fate and Star. Hawkman as played by Michael Shanks of Stargate fame functioned well as the grizzled veteran IMO.

The general lee was orange? It looked red to me, not starsky and Hutch red but redder more than orange. Thank old tv for the color and fading prints.

The General lee was Fanta orange? It wasnt red.