A few weeks ago (March 13th) the comic industry lost one of the last great Golden Age creators: Irwin Hasen. At the time I wanted to do a post honoring Mr. Hasen, but illness has kept me from posting on the FBU of late. And while my random thoughts here won't be as good as the Irwin Hasen tribute on A Shroud of Thoughts blog, I thought I would still share some of my thoughts on meeting Mr. Hasen and his most famous comic book character Wildcat.

Gina (my wife) and I were fortunate enough to meet Mr. Hasen at HeroesCon 2006 where I purchased this sketch from him. 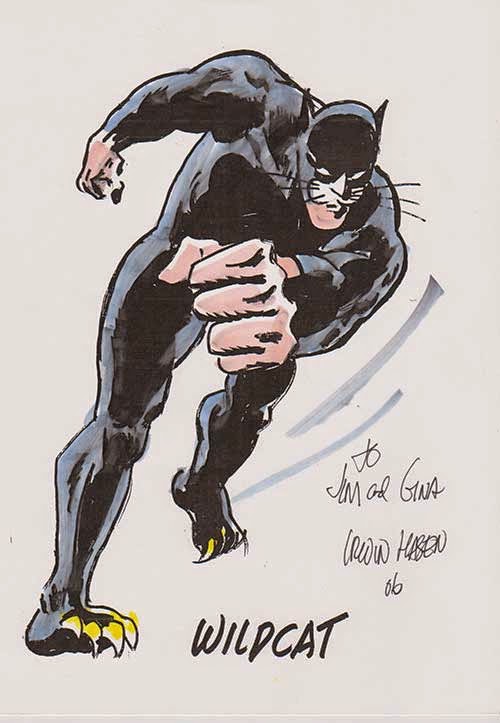 During my conversation with him, we talked about a number of topics ranging from what it was like to work during the Golden Age of comics, working with Bill Finger (co-creator of Wildcat) and Dondi. 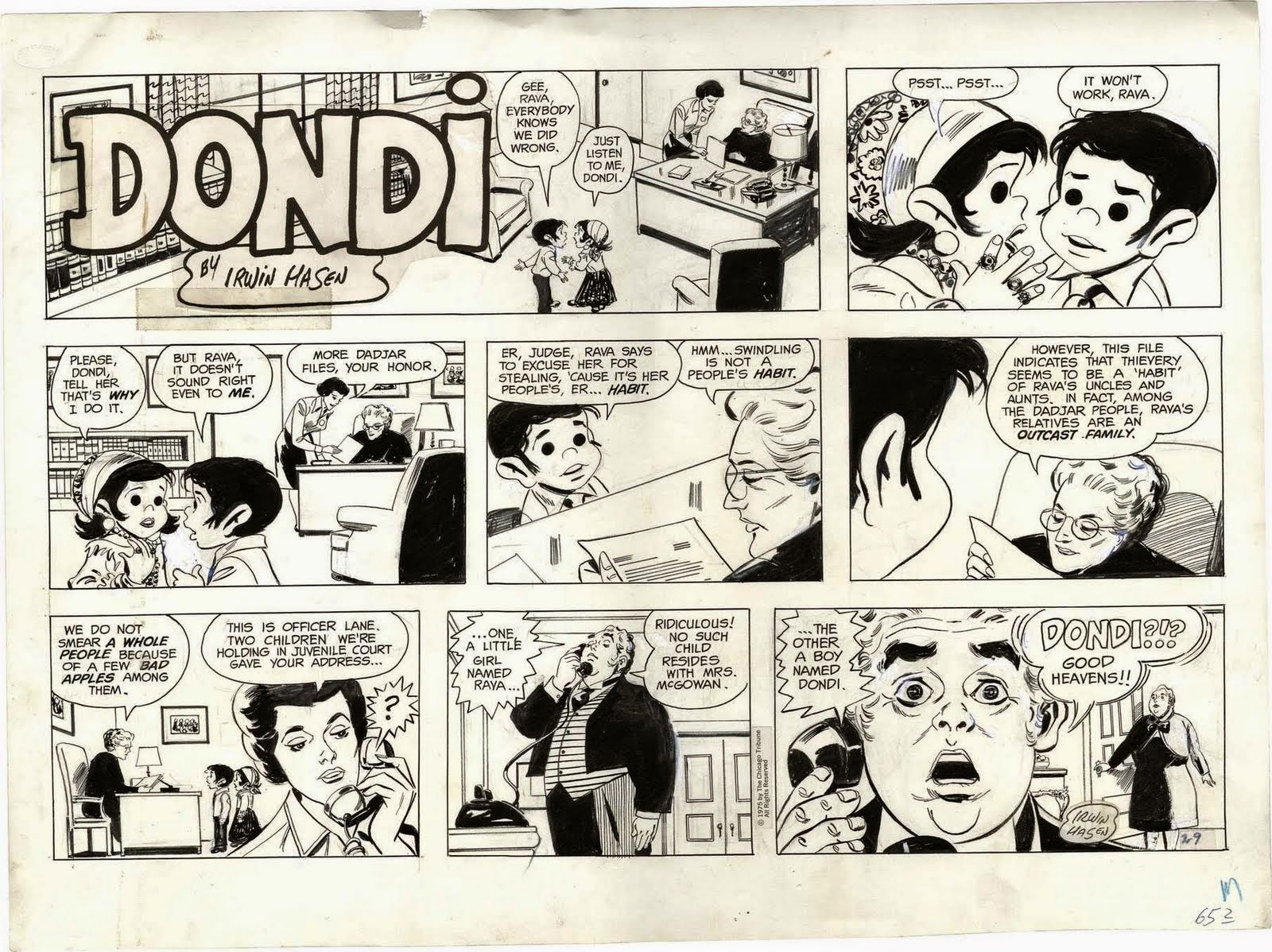 I told Mr. Hasen how much I loved reading Dondi when I was growing up. At the time, our local newspaper didn't have a lot of serial comic strips, sticking mostly with the day to day humor strips (Beetle Bailey, Hagar, BC, Peanuts, ect...) Still, there were a few serial strips (Steve Roper/Mike Nomad, Dick Tracey, Mary Worth) but none of them really appealed to young Jim Shelley the way Dondi did (which makes sense considering the lead character was a young boy.)

Gina and I found talking with Mr. Hasen very enjoyable and he seemed to enjoy talking with us as well. He had a very graceful, easy way of talking about his life that encouraged us to ask him more questions, which he seemed more than happy to answer. (I suspect his booth didn't get much traffic.)  It was one of the magical comic connections you can sometimes make at cons that make the expense and trip worth it.

I met him at Heroes Con, too.  The year I was there, he was milling around his booth by himself, so I went up to chat before getting back to work at the Heroes booth.  He was sketching Jay Garrick, so I asked him about the Golden Age Flash, and he talked about how some guy had been going on and on about the "right" belt on him and now he was second-guessing whether he was drawing his belt correctly.  We chatted for a bit, and before I left, he said — completely without ego — "If you like the Flash, you really need to go see Carmine [Infantino].  He's here, you know, and you'll never forgive yourself if you don't go meet him." I really dug how he recommended I go see Infantino (who was much busier and whom I didn't get to spend nearly as much time chatting up).

On the subject of Wildcat, I believe he was the first Golden Age character I encountered in comics (discounting Golden Age reprints of Batman and Superman). This was the issue where I first discovered the character: 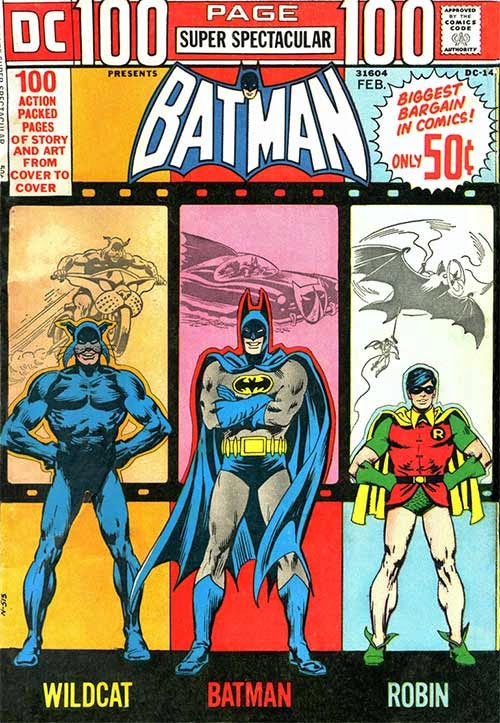 Also in this issue was a Golden Age story with Wonder Woman and Doll Man, but for some reason the Wildcat story is the one that sort of opened my eyes to the idea that there was an age of comics that preceded the one I was currently living in. I was aware of Silver Age stories (of which there was an Atom SA story in this issue as well) but somehow those didn't seem as special to me as this Golden Age story.  I also think the whimsical nature of the story (which introduced his sidekick Stretch Skinner) also helped earn Wildcat a special place in my heart. 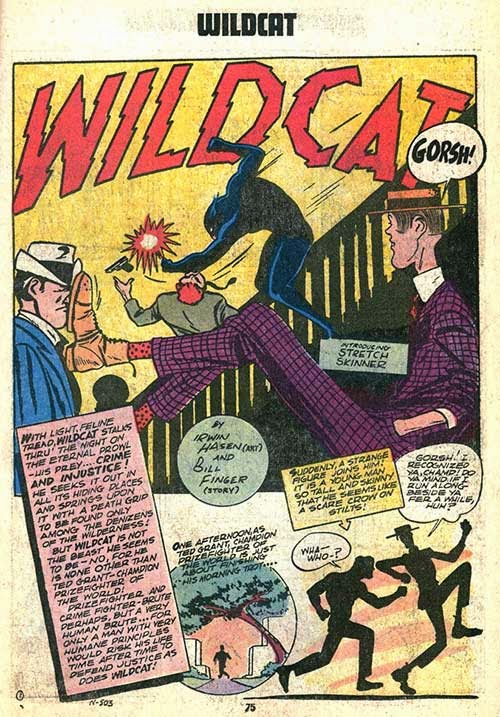 Sometime after this issue, DC would publish more 100 Page Super Spectaculars and I would be introduced to many more Golden Age characters (and the JSA itself) but Wildcat didn't make many more appearances in the 100 page giants for some reason. (You tended to see Doll Man, Robotman and Starman the most.)

Where Wildcat DID show up (much to my delight) was in the pages of the Brave and the Bold. Here his pugilistic detective style made him a well matched companion for Batman stories, whether he was helping Batman... 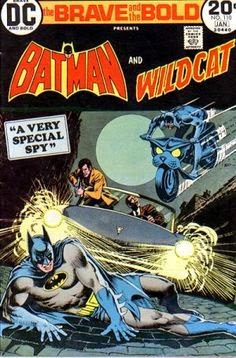 ...or fighting him. (Which was a popular theme.) 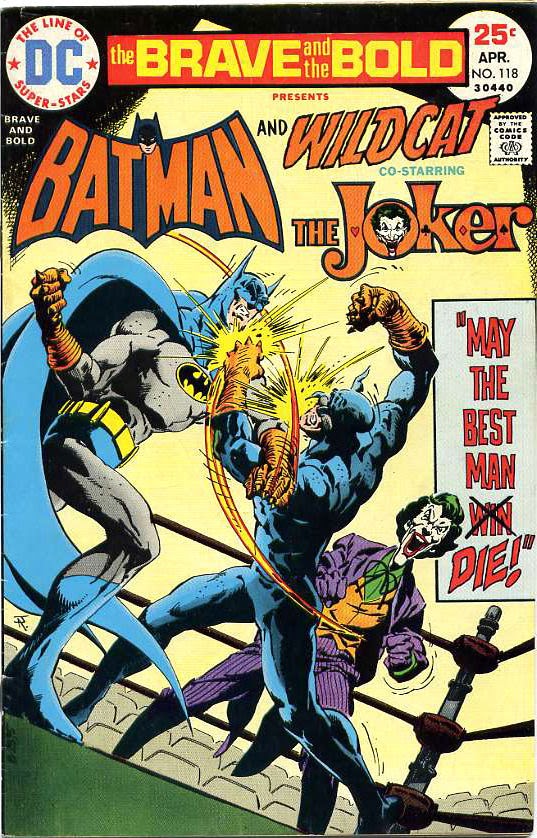 The appearance of Wildcat (who was resident of Earth-2) in the Brave and the Bold is sometimes derided by people who feel the Bob Haney Batman was a bit off the rails, but I totally disagree. (Hopefully, we'll someday have an article on the FBU that goes into more detail on the merits of Bob Haney's writing style.)

Regarding those Bob Haney Brave & the Bold stories: Scott told me there's a memo from Roy Thomas in the Crisis Compendium (that came with Absolute Crisis on Infinite Earths) where Roy offers to insert a plot thread into All-Star Squadron and Infinity Inc. showing that the Crisis caused random characters from Earth-2 to temporarily intersect with Earth-1 at various points in history, just to explain the "Earth-Haney" team-ups.  :D  Sadly, I don't think that ever happened.

After the Bronze Age I sort of lost track of Wildcat (and comics in general to a degree.) For instance, I never read either of these mini-series: 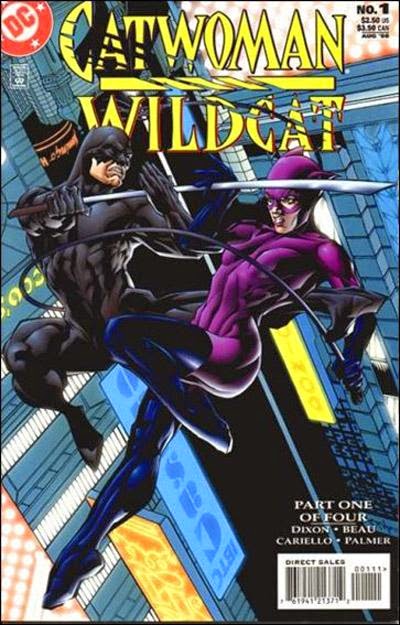 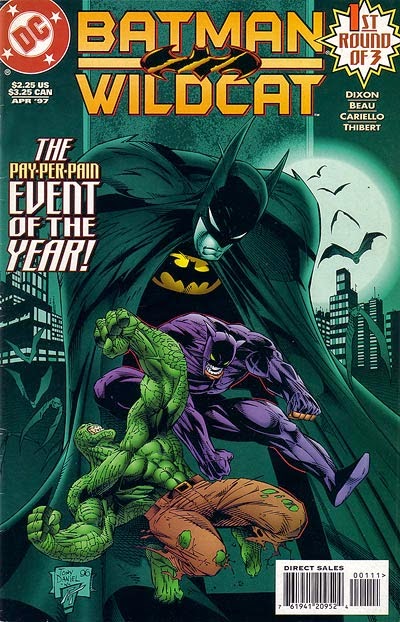 And I've never been curious enough to track them down and read them since discovering them. (Something about Chuck Dixon's writing style has never grabbed me.)

As I got back into comics, I was happy to see Geoff Johns make Wildcat a prominent member of his JSA series. Even if it meant having to put up with some tweaks and additions I wasn't always fond of. (Like the idea that he had 9 lives because Zatara altered a curse put upon Wildcat. Does anyone know if that was ever shown in an earlier story or was that just a retcon?)

I also wasn't a big fan of Ted Grant's son (Thomas Bronson) being a sort of werecat: 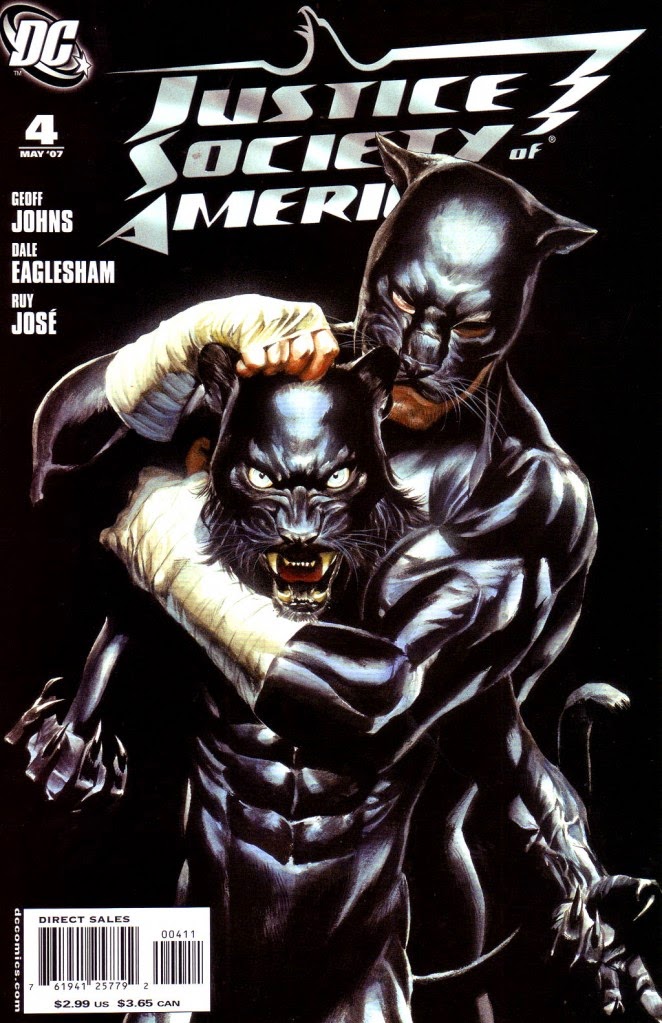 Though I did like the Yolanda Montez version of Wildcat who appeared in Infinity Inc. (One of those titles I missed when it was coming out but rediscovered later in life.) 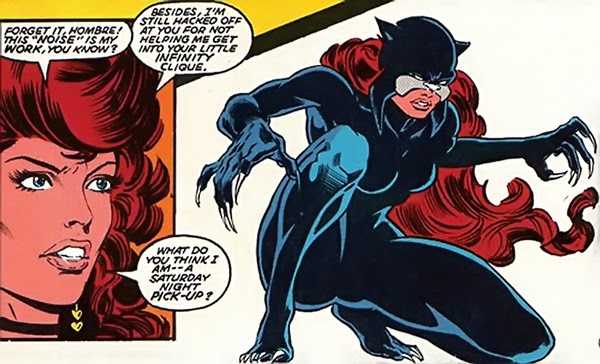 I think I was actually reading Infinity Inc while reading JSA so it may have been a case of I was introduced to the Montez Wildcat first, so she felt like the rightful heir to the name whereas the Bronson Wildcat struck me as being a bit too Wolveriney or something. 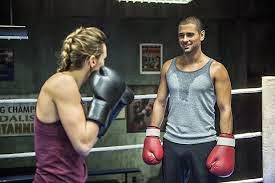 It's not Wildcat in costume, but it's still a nice tip of the hat to the character.

Not sure what the future holds for the character (or any DC character, honestly, given the sort of editorial upheavals the company has been prone to the past several years) but I would love to see someone like James Robinson or Ed Brubaker give their take on the character in a mini-series. (Brubaker might sound like a weird choice but his Fade Out series from Image shows he has an appreciation for 40's era stories.)

It'd be nice to see a collection of he Golden Age Wildcat stories as well, but that may be a bit much to ask.  :)

I don't remember who did the 9 Lives retcon, I think it was Grant Morrison but I may be conflating that with the GA Vigilante being a werewolf. Either way it was pre-Geoff Johns and served as an explanation as to how he bounced back from being aged like the rest of the JSA in "Zero Hour". A bad idea patch on a worse idea.

I agree, most of the retcons and his son were pretty lame additions. Don't care for the bandage wraps on his arms and perpetual stubble from that run of the JSA.

Ted Grant is shot in an episode of "Arrow" but I couldn't figure out if he actually dies or not. They seemed to imply that he was dying, but don't follow up on it and as I normally have classes on Wednesday night, my watching has been sporadic. I happened to see that episode and was explaining to my wife who the character was and it happened to be same week as Hasen's passing.

Thank you Ed. I wondered about the origin of that 9 lives retcon.

I totally forgot about the perpetual stubble! :D

With the exception of the nice JSA painted cover, the newer comic art is just awful. The anatomy is terrible. Now I remember why I stopped reading comics for a long time.

I always loved Wildcat. He taught Batman and Black Canary how to box, how badass is that?