Today, I'll continue the Top 20 Bronze Age Superhero Comic Runs I started a couple of weeks ago, with the next 5 entries and finish the list on Wednesday. Starting with number ten: 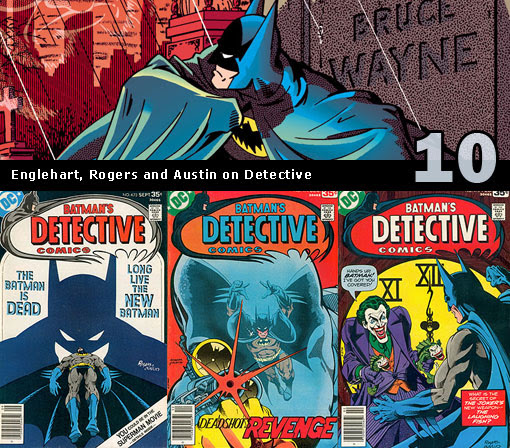 After leaving Marvel, Marshall Rogers joined fellow Marvel refugee Steve Englehart to produce some of the most memorable Batman comics from the 70's. Obviously a fan of the character, Englehart created a storyline that incorporated many of Batman's rogues as well as reintroducing several who had been forgotten since the Golden Age. (Hugo Strange and Deadshot) One of the original characters for the series was Silver St. Claire, who would become Batman's love interest. Englehart, who has always had a knack at creating interesting female characters, made St. Claire a fully realized leading lady who seemed perfectly suited for Batman's world.
09: Batman 234 - 250 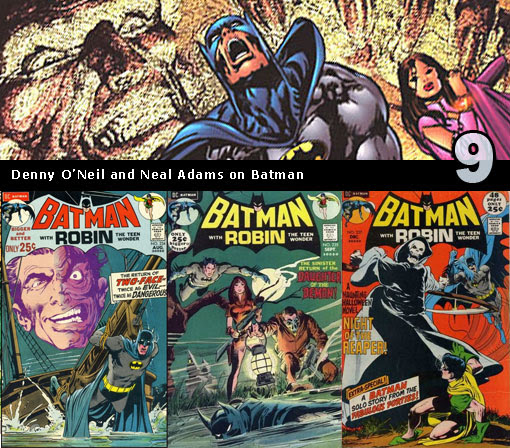 This is the team responsible for returning Batman to his darker roots which ultimately paved the way for such things as Dark Knight Returns. While doing research on this run, I discovered this excellent YouTube Video in which Denny O'Neil himself talks about this period when he work with the incredibly talented Neal Adams. There's nothing I can add that would be better than hearing it from one of the creators involved.

Some of the highlights from this run include:
As I mentioned Monday, it was this period where Batman started getting redefined for the times in a way that has allowed him to stay relevant today.
08: Goodwin/Simonson's Manhunter 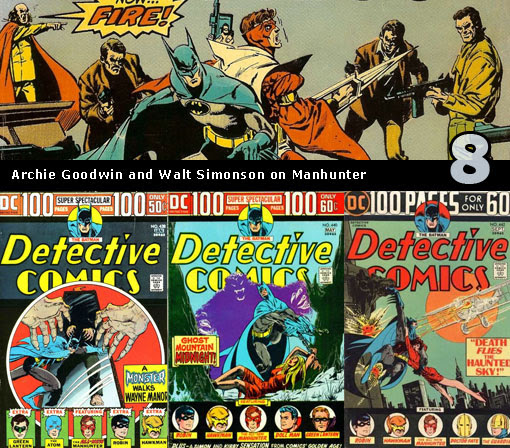 This is a short run, so putting it so high on the list might seem overly generous. I've praised this run on several occaisions here. Perhaps it is a bit idiosyncratic to place it so high, but there is something utterly magically about this run that I've rarely seen since. It had an innovative approach to design and dizzying linework that was exhilirating to behold. Goodwin also did a nice job of combining old pulp staples (exotic cults, playboy adventurers) with newer concepts (martial arts, healing factors, cloning)
07: Swamp Thing 1 - 10 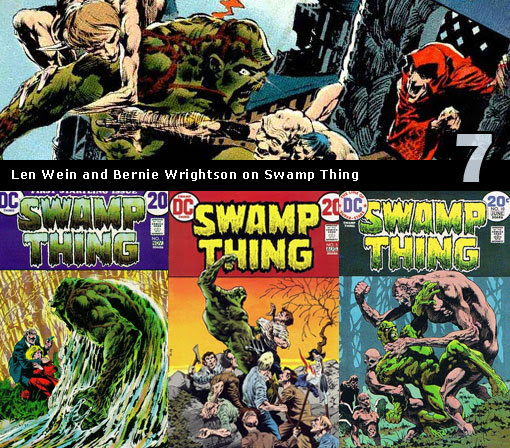 As a kid, I wasn't quite sure what to make of this series. The covers often looked a bit too PG13 for my younger self, but I could still tell there was something of quality about the series. (I think how well rendered each cover was what struck me.) When I got older, DC reprinted the series in some $1.00 sized editions which I picked up in the 80's. Those floored me. The stories and artwork had a tone and atmosphere about them that seemed so much more authentic than other monster titles I had purchased. While Swamp Thing had the soul of a hero, this didn't feel anything like a superhero title. At a time when Werewolf By Night was teaming up with Iron Man and Man-Wolf was sword fighting on alien planets, DC's muck monster was at the mercy of Anton Arcane and his gruesome Un-men. The characters, setting and stories put forth by Wein and Wrightson provided such fertile material, that I don't think it's a coincidence that some of comics best writers were (and still are) attracted to work on the series.
06: Spider-man 101 - 149 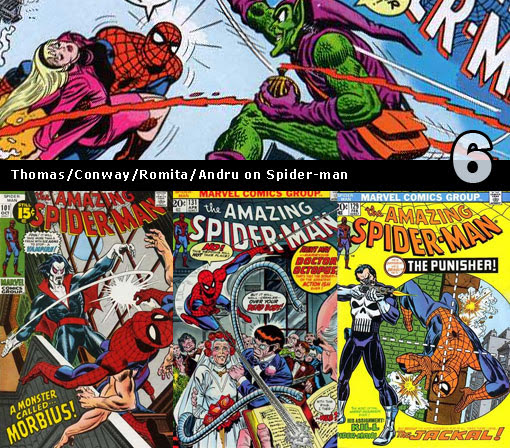 When Stan Lee stepped down as writer of Spider-man with issue 100, one would have thought the series would have lost a lot of it's creative steam. As it turns out, successive writers Roy Thomas and Gerry Conway were just the people to keep the book in high gear. Aided by the fantastic artwork of John Romita, Thomas kicked things off with a story that introduced Morbius, the Living Vampire and had Spider-man gaining six arms. Thomas would move to editor after 4 issues handing the reigns to Conway who would stay on the title for 44 issues. When Romita moved off the title, he was replaced by Ross Andru who was already drawing Spider-man in Marvel Team-Up. Romita brought an classic illustrative beauty to the book which fit Lee's dramatic stories whereas Andru seemed to have a better handle on dynamic action scenes. As I pointed out in another article, to many, Andru is seen as the Bronze Age Spider-man artist. Altogether, these four creators would introduce some of the titles most historic moments:
All that and the infamous Spider-Mobile!

Be sure to check back Wednesday for the final five entries.

The homicidal Joker has now been just so bloated out of proportion it's become simply the opposite absurd extreme of the most campy version you could think of. I think the Bronze Age Joker has the right balance but as I often say the BA had a kind of equilibrium that is part of what I appreciate about it.

Death of Gwen Stacy is a story I have very mixed feelings about. In and of itself, it's well done but I have to wonder if what we gained is really worth what was lost.

Max Landis did a big YouTube video talking about how the Death/Return story killed the idea of death in comics. I feel like it may have actually died long before that with Gwen Stacy and also Jean Grey.

The deaths of these ladies started the ball rolling on death as a revolving door that is constantly being walked through and also as the go-to solution when writers didn't know what to do with a character. It also set the stage for character death as a quick sales fluffer and really I think started the girls in refrigerators trend with the idea of killing the heroes girlfriend to make him go into a kewl berserker rage.

I'm not trying to say no one should ever die in a comicbook but things have gone off the rails and the snap of Gwen's neck may have been the sound of the first wheel coming off the track. Or if nothing else it was a good story that an entire industry and fandom took all the wrong lessons from.

@JimShelley. On the one hand yes, these are dangerous situations. So having there never be any death at all is a bit forced.

On the other hand any other issue the hero would make the save somehow, some way. Especially with a member of the major supporting cast. I get that they were up against a fan base who loudly preferred Mary Jane. I can see why they wanted to write Gwen out in a way that made you miss her. I still question the wisdom of making it look at all like Peter's miscalculation. But I think fans who went on to become pros decided it's now all fair game and an easy route to drama is to kill off the girlfriend because gosh wasn't it just so edgy and mature when they did that with Spider-Man?

It's no wonder even Peter himself eventually ended up on the chopping block. Fanfic as canon.

I'm profoundly disgusted but not exactly shocked that Marvel and DC have gotten to the point where death is such a gimmick that it is now announced in business terms as part of their publishing strategy. I'm not sure what's worse, the company for doing that or the fan who actually requires the reassurance.