"Change! Change! O' form of man! Release the might from fleshy mire! Boil the blood in heart of fire!

Rise, the Demon Etrigan!!"
I first read those words in Action Comics issue #587 by John Byrne.

I loved that little rhyme. Although only now can I realize that Byrne had changed slightly the rhythm of that rhyme. I got a kick from seeing the Demon in the comic. But it would take a while until I would see more work with the Demon in it. I think the next time I saw the character.... it was in the Demon ongoing series of the late 80s or early 90s. I tried a few issues and was not too crazy about it. So I did not become a regular reader of the book.

But I later got the Cosmic Odyssey TPB with the Demon in it... yes I know... I got that TPB pretty late. Somehow I missed it the first time it was on the shelves of the comic shops.

I got a better version of the character though in Cosmic Odyssey... although the demon plays only a small role in that mini-series. But then I became a Jack Kirby Collector addict and saw some of Jack's pencils for his Demon series. Loved seeing those pencils.

And at some point... I was fortunate to be able to get my hands on some of the Demon's issues by Jack. I got them comics for next to nothing... but them comics were in pretty poor condition. But I did not care... I could at least read some of Kirby's original Demon comics.
It was quite a treat.

Then some time ago, Jim sent me Superman: The coming of Atlas which conatins a the old DC First Issue of Atlas drawn by Kirby. This put me on a real Kirby kick for more so, the hunt was on.

I started going from comic shop to comic shop hunting down that darn Demon Omnibus. Why the Demon and not maybe "The Fourth World"??

Well... I already own a copy of some New Gods, Forever People, and a couple Mister Miracle TPBs in black and white. So I figured I should start with the Demon since I barely owned a couple of issues... and keep the Fourth World for another time.

Sadly... when I was asking around for a copy of the Demon Omnibus... no one seem to have a copy of the trade... and I was told that they could not order it. I had been told the same about the Captain Britain Omnibus. But after a bit of running around the Canadian wilderness, I finally found a store with a copy, and it was well worth the hunt! The book is filled with pure Kirby goodness.

It contains the storytelling, panel compositions, designs, energy, action, drama, bold artwork that only a Kirby comic can contain. And they did a wonderful thing in keeping the bright coloring of the time that I sorely miss in today's comics.

Heck... it's no coincidence. Why do you think that we use such bright colors in our FBU comics?? We miss them bright colors of yesterday's comics. But I suspect many of the readers of this blog feel the same way sometimes judging by comments I've seen posted here. 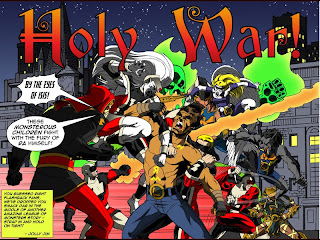 This book also includes some of Kirby's penciled work. And from what I understand... there even are some pages in this book that were never printed before. The one bad thing... the one bad comment that I can mention.... is that it is printed on newsprint. Although Kirby's work looks stunning on newsprint, I can't help but wonder what it will look like in 20 years once the pages possibly turn yellow.

I guess we will have to wait and see. Although until then, I have some formidable Kirby comics to read and to admire.

I totally agree with you on comicbook colors. But I've also seen an example of what current technology can do working with those bright colors rather than muting them down.

If you check out the most recent collection of Jack Kirby's Thor run covering the Tales of Asgard stuff, Marvel did a pretty good job keeping to the comicbook coloring but using modern techniques to enhance it and lift it out of the limitations of the time.

Or to put it simply, Thor's red and blues are intact in all their glory just richer, but now trees don't have to be orange anymore.

I have the old first issue specials which feature Kirby on Atlas, Manhunter, and even Dingbats. Loved the old bright colors too, and was glad to see DC not muck up the colors in reprinting them.

@MattComix - I've been wondering about that Tales of Asgard collection. I've sorta been on teh fence about it because I'm not familiar with the stories. That's funny about the trees!

@RKB - Yeah, I thought the same thing (about the colors in the Atlas reprint)

Weren't those First Issue Specials an amazing wave of ideas? Some that went on to really become pretty big later. It's a shame that such a concept isn't around anymore. In a way, Zuda always sort of felt like that to me.

Yeah, Zuda did remind me of the old debut books. I bought (in good to fine condition) Issue 1 with Atlas, issue 3 with Metamorpho, 5 with Manhunter, 6 with Dingbats, 7 with the Creeper, 12 with Starman, all on a lark because I got them cheap. I had never heard of first issue special and with the exception of Metamorpho and the Creeper didn't know who any of the characters were at the time.
*******************************
The fellow I bought them from told me that was the lot from his collection except for first issue special 8, which no way was he selling because it was Warlord. :( -still I read them and found out I hit flea market gold! :)
**************************
Sooner or later, I'm going to track down the Lady Cop, Dr. Fate, Original Outsiders and code name: Assassin issues. Might even pick up issue 2 for the Green Team just to see if it's better or worse than Prez. ;)